Cut the Shiitake By Growing Your Own Mushrooms

Shiitake mushrooms are a delicious (and potentially profitable) crop that, with some time and effort, you can cultivate on your property. 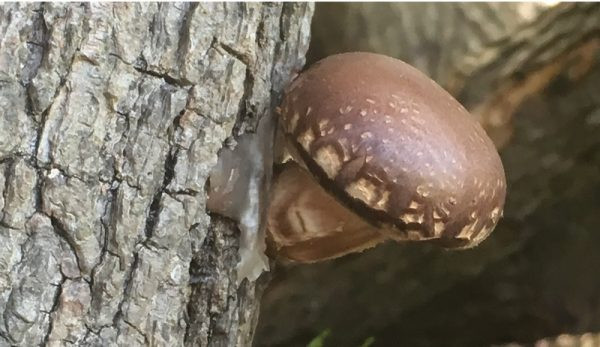 Sometimes this was done when a male child was born so he would benefit from this growing treasure.

A horticulturist wrote the first book on shiitake growing in Japan in 1796. So in a global sense it‚Äôs not a ‚Äúcutting edge‚Äù crop. But it has always been a highly desirable one. Stories are told in Japan of shiitake wars that started when people stole logs rather than starting their own.

But shiitake mushrooms have become cutting edge in Western countries in the past few decades. They now constitute about 25 percent of yearly mushroom production worldwide.

The shiitake (Lentinula edodes) is also a wild mushroom in Asia, but it‚Äôs not found in the wild here. So any shiitakes you see in the market or on a menu are cultivated, which hasn‚Äôt kept some chefs from describing a dish with shiitakes or cultivated oyster mushrooms as containing ‚Äúwild‚Äù fungi. But I hope as mycophage diners get better educated, we‚Äôll see less of that.

Read more:¬ÝYou can grow mushrooms on compost for a delicious fungal feast.

Agricultural extension agents and other experts no longer recommend dropping and dragging live trees as a growing technique, but they do suggest lots of cutting, drilling, packing, stacking and dunking of logs. One could set up an entire CrossFit regimen around growing shiitakes. (And if you could recruit workers by offering it as a CrossFit class‚Äî‚ÄúForget Forest-Bathing! Get a First-Class Workout with Shiitake CrossFit Training!‚Äù‚Äîyou might add a second income stream. Maybe.)

Here are the basic steps involved: 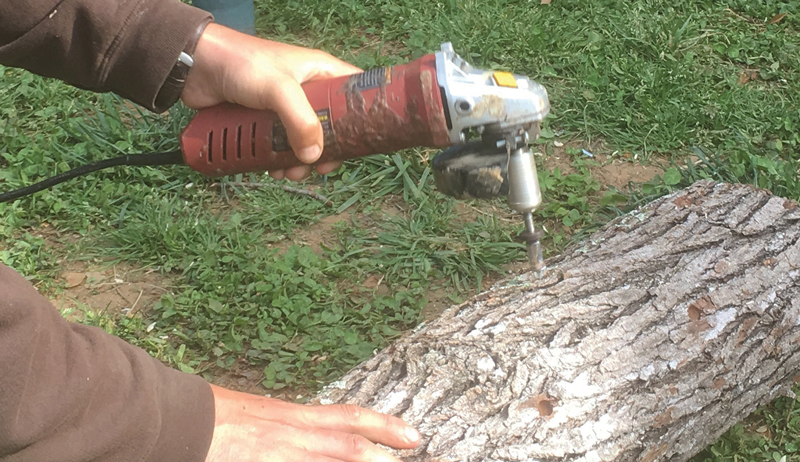 Which Logs When (and How Big)?

It‚Äôs best to cut your logs in winter, when they have more sugars and less moisture than during their growing season. Best sizes are 2 to 4 feet long by 6 to 10 inches wide, depending on how much weight you can handle.

After cutting, wait a week before inoculating them, so the trees‚Äô antifungal defenses can whither away. Also, inoculate them no later than four weeks after cutting live wood so competing fungi won‚Äôt have time to invade.

Shiitakes prefer dense, deciduous hardwood trees such as oak. A 6-inch diameter log of white oak is dense enough that it might fruit for as long as six years if well tended, or very roughly one year of production for each inch of diameter.

Lighter (softer) hardwoods such as poplar, birch and alder fruit less than oak. Word of mouth indicates that sweet gums might be the wood that shiitake colonizes most quickly. But again, as a lighter wood, it doesn‚Äôt produce as much.

Perhaps sweet gum is a good species to start with for a quicker turnaround when you‚Äôre getting started (or if you have a lot of it you want to get rid of). Overall, white and red/black oaks provide the best return on your effort.

However you get your logs, make sure ‚Äúthey have their pants on,‚Äù as some growers say‚Äîmeaning the bark should be intact and cover the entire length of the log. That helps keep moisture in and competing fungi out.

Read more:¬ÝGet more stories like this in your inbox by subscribing to our newsletter!

In your laying yard, stack the logs to get them off the ground and make easy access for mushroom picking. The two most common patterns are called ‚ÄúA-frame‚Äù and ‚Äúcrib‚Äù or ‚Äúlog cabin‚Äù style.¬Ý

For the A-frame, a horizontal pole or cable can be set about waist high and the logs lean on that like so many staggered roof rafters. In the crib or log cabin pattern, two logs are set parallel aiming north to south. Another two are placed on them aiming east to west. And so on.

On hillsides too steep for either pattern, there is a hybrid of the two called Japanese hillside stacking. It‚Äôs a trickier pattern best learned by doing. Check out a short video from Cornell University Extension that shows this technique. 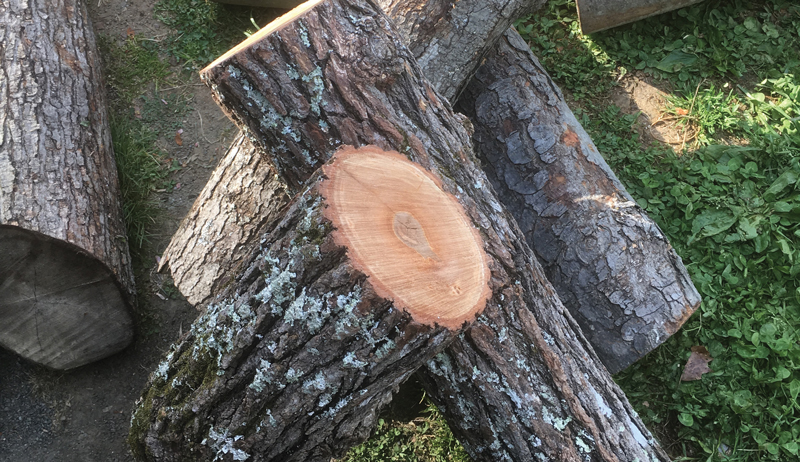 Growing shiitake mushrooms is pest-free most of the time, but a few problems might show up. The most likely one comes from competing fungi: They might appear if the logs are resting on the ground.

Scare up some free pallets and spread them as a layer on the ground for your logs to rest on and to create a moat between your logs and fungus in the soil. This also deters termites. Laying your logs under a canopy of conifers also works: Pro-conifer fungi won‚Äôt attack deciduous wood.

Sometimes beetle larvae appear in the gills of your brand new mushrooms. You can prevent this by covering the logs with a fine mesh to preclude beetle egg-laying. Quick harvesting of mushrooms while the caps are still concave also prevents this.

When harvesting mushrooms with beetle larvae crawling around inside the gills, some folks have blown them out with a hair dryer.

If snails are a problem, you can trap them with decoys of lettuce or cabbage leaves on the ground. Kill slugs with salt or scoop them up for your chickens. Spreading wood ash can also deter them.

But How Much Money?

Wholesale prices on shiitake mushrooms run $5 to $9 a pound, and your retail price at the farmers market might be twice that. According to the North Carolina Ag Extension Service, a cord of about 125 logs could grow as much as 500 pounds of shiitake per year.

At the low end of the wholesale price you‚Äôd make about $2,500.

That cord might cost you about $125 and an equal amount for the spawn. Add another $1,000 give or take for labor and other expenses on that cord (unless helpers are paying you for their CrossFit training).

And then, depending on whether you let the logs fruit naturally or you force them by dunking, and whether you sell wholesale or retail, your annual net might be $500 to $3,700.

Data from the University of Vermont shows that a 500-log stand would net a farmer $6,000 to $11,000 a year, depending on whether the shiitakes were sold wholesale or retail.

Here‚Äôs one last bit of advice: Keep a written record of frequency of fruiting, time between dunking and fruiting, prices paid and so on to help you learn the best practices with your logs, market, site, climate and cultivar.

And maintain good quality control by sampling the merchandise on a regular basis.