“The Cutest Sheep in the World” Comes to the U.S.

Breeding programs expand the Valais Blacknose, whose wool is good for carpets, bedding and felting, beyond its native Switzerland. The breed of sheep is ideal for small farms. 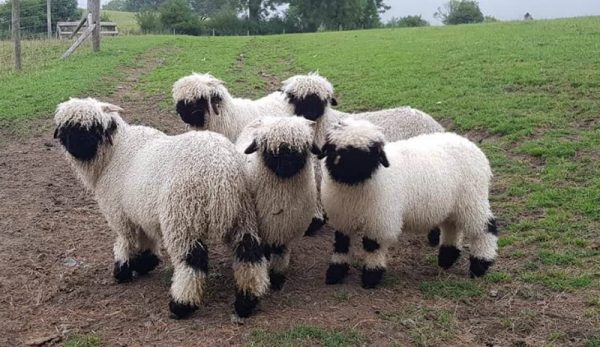 If you’ve dreamed of raising a rare breed of sheep, you’re in luck. The Valais Blacknose, otherwise known as “the cutest sheep in the world,” is making its way to the U.S., and you can be among the first to bring the breed to your farm.

The first Valais Blacknose babies will be born stateside this year in Mobile, Alabama, as part of the Valais Blacknose Association of North America’s breeding up program, which aims to continue the genetics of this rare sheep breed that originated in 15th century Switzerland. The moppy haired white sheep has spiral horns and distinctive black markings on its nose, knees and feet, giving it a cuddly look straight out of a children’s fairy tale. It has a sweet, curious disposition as well. According to Valais Blacknose New Zealand, another breeder group, the Swiss have a saying: “Make friends with a Valais and you have a friend for life.”

The Valais Blacknose is well suited to the Valais Mountains of Switzerland, and few populations other than a stock maintained by a German breeder have made their way outside of the region. Recently, however, the breed has garnered attention around the world, with new breeding programs popping up in the U.S. and New Zealand.

The Valais Blacknose’s wool is desired for carpets, bedding and felting, but the sheep can also make a great pet in a hobby farm setting. Care for the breed is fairly easy, particularly in mountain climates, though farmers hoping to raise the breed in warmer, wetter conditions need to take precautions against foot rot, foot scald and fly strike.

To learn more about how to get this cute and cuddly sheep on your farm, reach out to the Teton Valais Blacknose Sheep Co., which plans to have lambs for sale each spring. Or if your farm isn’t ready for sheep quite yet, book an international vacation to this New Zealand bed-and-breakfast, which will get you up close and personal with a pair of nosey and lovable Valais Blacknose twins in a gorgeous mountain setting.