Apples used to make hard cider are quite different than sweet varieties made for eating. Here's what you need to know about apples for the hard cider market. 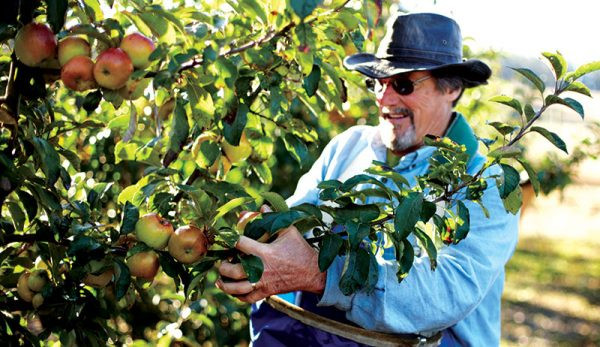 My wife roped me into the kind of traditional cider tasting where the cider streams out of a tube in the wall of the bar. You hold out your glass to catch it over a 10-foot drain built into the floor. The cider gets nicely aerated (while you try to avoid getting thoroughly drenched). From this dynamic experience and a conversation with the cidersmith hosting the event, I learned some interesting things, about hard cider and the apples used to make it.

It might be difficult to believe, but hard cider was AmericaвҖҷs top drink at the beginning of the 20th century. Now, 100 years later, itвҖҷs becoming one of the countryвҖҷs fastest growing ones.

YouвҖҷll find the juice of enough apples in a 12-ounce bottle of gluten-free cider to keep the doctor away for several days. But health consciousness might not be the reason hard cider consumption has doubled every two years in the recent past. The growing appeal of other beveragesвҖ”fine wines, microbrews and curated coffeesвҖ”has helped supercharge the cider market.

But using common, sweet apples to make hard cider would be like using table grapes to make wine. Accordingly, small farmers plant trees that produce tart, inedible, heirloom apples for that market. They also use shorter varieties, planted closely together and on a trellis, as you would plant wine grapes in a vineyard.

From a farmerвҖҷs perspective, this growing demand for cider (alongside some strange twists of history) create the potential for profit. The best apples for cider making are so tart theyвҖҷre known as вҖңspitters.вҖқ These barely edible applesвҖ”called bittersweets and bittersharps in the industryвҖ”were the ones famously planted for settlers by Johnny Appleseed. Cider making allowed pioneers to store their harvest long after the fresh eating apples (now called dessert apples or вҖңwater bombsвҖқ) had been consumed or shriveled up in storage. Yep, one bad dessert apple can ruin a barrel in a matter of weeks, but a barrel of cider remains stable and profitable for many months.

These heirloom varieties, with names such as PorterвҖҷs Perfection and Kingston Black, were also the ones infamously given the ax by government agents during Prohibition. Until that time, cider had been AmericaвҖҷs top drink. But now, thanks to those fatal pruning jobs by G-men, there arenвҖҷt enough of the best cider apples to meet demand.

As this thirsty consumer market continues to grow, the shrinking availability of spitters drives up their prices. Hard cider apple varietiesвҖ”such as Father Abraham, Chisel Jersey, Graniwinkle, Horse Apple, Foxwhelp, Limbertwig and King of the PippinsвҖ”get as much as double the price for water bombs. Because the visual appearance of these spitters is less important than texture or flavor, cider apple farmers save money by cutting the number of pesticide sprays in half. There are other advantages for a grower, too. They use fruit that looks bad, as well as those that are too small or overripe for a fresh-eating market. If state regulations permit, cider apple farmers can also use fallen fruit gathered from the ground. Try doing that with fresh-eating apples!

Cider was a huge part of frontier life, which Howard Means, author of Johnny Appleseed: The Man, the Myth, the American Story, describes as being lived вҖңthrough an alcoholic haze.вҖқ New Englanders on the frontier drank about 10 ounces of hard cider per day; by comparison, the average American today drinks 20 ounces of water a day.

вҖңHard cider was as much a part of the dining table as meat or bread,вҖқ Means writes. вҖңUp until Prohibition, an apple grown in America was far less likely to be eaten than to wind up in a barrel of cider,вҖқ writes Michael Pollan in The Botany of Desire. вҖңIn rural areas cider took the place of not only wine and beer but of coffee and tea, juice and even water.вҖқ

Yet these barely edible apples become more rare as the market grows. Some industrial cider makers substitute fresh eating apples, which craft cider makers avoid. Another difference: Industrial ciders, made from juice concentrate with added tannins, are normally priced like beers, while artisanal or craft ciders made from spitters are often priced and marketed like wines. So if youвҖҷve always wanted to own a vineyard, but your climate and soils arenвҖҷt conducive, a cider orchard might work.

Here are six apple varieties to consider for your hard cider orchard.

After the last frost in spring and as soon as the soil is workable, plant bare-root trees in a hole just big enough to spread the roots. They like a well-drained, slightly acidic soil and grow best in cold hardiness zones 4 to 7. Set them about 5 feet apart in the row with rows about 15 feet apart. Spread a 2-inch layer of organic mulch around the young plants the first year. Let mown grass grow between the rows and the plants.

These old-time, heirloom cider apple varieties are grafted onto modern dwarf rootstocks with names such as Budagovsky 9 or Malling 9. These rootstocks limit the apple trees to about a third of their height. They also weaken the trunk so that a wire trellis is needed. Yet the savings in harvesting and pruning without ladders more than offsets the cost of grafting and trellising.

An apple tree trellis resembles a 6-foot-tall fence, but with fence posts every 20 feet and four strands of horizontal wire 11вҒ„2 feet apart. Plant three saplings (each trunk about as thick as a finger) between each set of posts. Clip each sapling at about 18 inches (called вҖңheading offвҖқ) to promote new side branches and tie loosely to the bottom wire.

Before you get serious about hard cider apple farming, consider these numbers.

Louis (pictured in the photo at the top of this story) and Jan Lee do all of the work on their AppleGarden Farm in Tomales, California. They have 300 trees with 40 varieties, farm organically and produced 800 gallons of cider last year.

Each spring or early summer, tie future branches and a top shoot to the horizontal wires. Clip off branches that are not in the plane of the trellis wires to maintain space between rows for pruning, harvesting and spraying.

A low-nitrogen organic fertilizer broadcast after pruning will make your crop less susceptible to the wide variety of insects and diseases that can strike apples. Spraying insecticides and fungicides is best done only as you need it, determined through an integrated pest management strategy that monitors pest populations.

One major weakness of most cider apple trees: They often follow up a year of heavy fruit set with a year of scant fruit. But two practices help level production:

1. Plant a mix of heirloom varieties.

2. In the heavy years, thin the fruit by pinching off every other fruitlet four to six weeks after flowering.

For fruit tree pruning youвҖҷll need four tools: your fingers for pinching off excess fruit, hand pruners for twigs, loppers (a two-handed pruner) for small branches, and a curved pruning saw for large branches. The hand pruners and pruning saws often come with matching holsters. Often, one handle of the loppers can fit through a belt loop or your hammer loop for carrying.

Depending on variety, cider apples might ripen from midsummer to fall. Gather cider apples when you smell the aroma of overripe fruit, which is also about the time some fruit drops to the ground. Surprisingly, several cider apple varieties were developed for this tendency to drop fruit; itвҖҷs easier to pick apples off the ground than from the tree. As you can see, the cider might be hard, but the growing can be a little easier than with fresh-eating apples.