How to Make Dandelion Wine

Turn your weeds into homemade spirits with this recipe for dandelion wine. 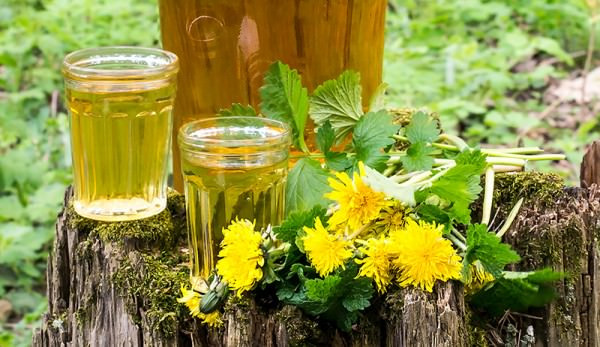 Put dandelion flower heads to good use by making dandelion wine. (As it turns out, you can make wine out of most anything, including blackberries.) Make sure to select flowers that havenâ€™t been exposed to chemical treatment. Just to be safe, wash them well before using.

What You Need to Make Dandelion Wine

Put washed flower heads in the crock and cover with the boiling water. Steep at room temperature for one week.

Place citrus slices and sugar in saucepan; press with a wooden spoon to bruise and release juice. Strain dandelion liquid into the saucepan and discard flower heads. Add ginger, cinnamon and cloves. Bring to a boil, stirring occasionally, then let simmer for 30 minutes. Cool to lukewarm. While mixture is cooling, dissolve yeast in ÂĽ cup warm water; add to saucepan. Let liquid stand uncovered at room temperature for two days.

Strain liquid through a paper filter into a large crock. Let stand, covered, for three weeks.

Strain into sterile bottles and cork. Store in a dark, cool place for three to six months before using.