Here are 5 interesting facts about dandelions, including how they help honeybees and other pollinators, and why you should keep them around. 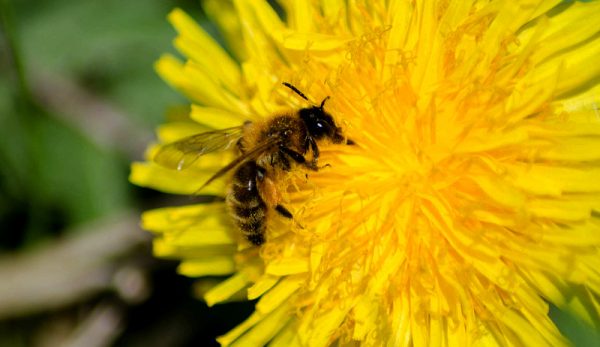 When spring hits your little corner of the world, you know it. The sunlight shifts, and the air literally buzzes with life: Native bees, honeybees, butterflies, wasps (they’re beneficial, too) and hummingbirds fill the air. To us, abundance and fertility has returned to the Earth, and it feels good.

But there’s a hidden world we don’t see: the one where bees struggle to find food. In very early spring, before the days get hot and the ground becomes malleable, there’s still danger afoot for honeybees. Remember, honeybees are not native to North America, so every year when the world awakens, they are strangers in a strange land once again. Overwintered hives might be very low on honey stores, and while the world is warm enough for activity, it might not be warm enough to have copious amounts of blooming forage from which bees harvest nectar.

Enter the dandelion, arguably one of the American homeowner’s most dreaded natural lawn ornaments. This incredibly potent medicine herb (for insects and humans, alike) has long been considered a weed and thus inhabited gardeners’ naughty lists. Setting aside any differences we might have about the dandelion, one thing is for certain: It’s one of the best and earliest sources of food for our honeybees.

Here are a few other fun facts about the plucky, tenacious dandelion:


1. The Dandelion Is Also a Transplant

Like the honeybee, the dandelion isn’t native to North American. It’s believed that European colonists brought the plant for its medicinal purposes. Once in the soil, it spread quickly.

2. Dandelions Reproduce on Their Own

Dandelions are essentially self-fertilizing. They send out viable seeds with only one plant, meaning the presence of a single dandelion root means it will eventually spread, growing clones of itself with its own seeds.

Dandelions are a diuretic, something that causes the increased passing of urine and is used to treat high blood pressure and kidney disease, among other things. In fact, the French name given to the plant, pissenlit, means to wet the bed. This is one of the many medicinal uses for the dandelion.

These bright and happy yellow buggers are incredibly nutritious. All parts of the plant (leaves, roots and flowers) are edible, and contain copious amounts of Vitamins A and K as well as calcium, magnesium, and iron. The plant’s exceptionally long taproot can be baked and ground up and used as a substitute for coffee.

5. They Can Bloom Twice a Year

Dandelions bloom most abundantly in the spring but, in certain parts of the continent, also bloom again in fall. When the plant does bloom, the flower remains open during the day and closes at night for the duration of its bloom.

So, set aside your differences with the dandelion. Once a gardener or homeowner makes the transition to beekeeper, that person starts to look at the dandelion a little differently. In addition to their own medicinal purposes, dandelions are important food sources for our bees, so don’t hold back. Let them spread far and wide. Pick up a puff, and give it a blow!