Daylilies are wildly common in flower gardens, but did you know the plants are as edible as they are beautiful? From petals down to its tubers, a daylily offers tons of surprising flavor. 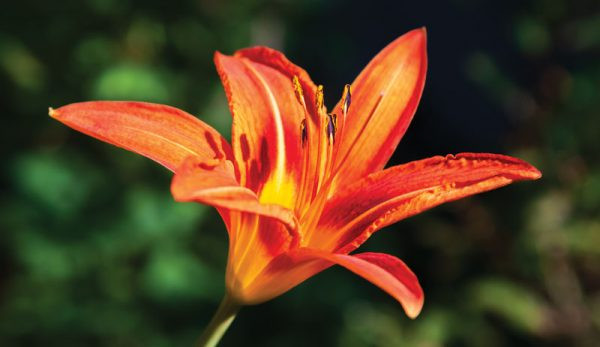 When most people think of foraging, they imagine gathering plants in the wild. But several dozen ornamental garden plants have delicious, nutritious, edible parts that even most gardeners donâ€™t know about.

You’ll find one of these, the daylily, in most any garden in late spring. You can grow daylilies to sell as an edible product at market, too.

Daylilies Are an Edible Delight

On a trip to rural Quebec, our agritourism host found a local forager at my request. Sebastien Royer had learned from his grandmother how to forage wild edible plants. And from his fatherâ€™s hunter friends, heâ€™d learned to identify edible mushrooms.Â

We were wrapping up a pleasant morning spent poking around the woods when he pointed to the orange daylilies in front of the farmhouse. I told him I knew they were edible and had eaten the flowers, greens and tubers of daylilies.

But he said that wasnâ€™t what he meant.Â

With that, he plucked a fully open, orange flower and pinched the stem end off. He held that end of the flower to his mouth and sucked out the nectarâ€”sweet (literally!).

Even when you think you know everything about a plant, someone from another region can surprise you. And daylilies are full of delicious surprises.Â

Daylilies (Hemerocallis fulva) are common as weeds in home gardens. Older gardeners often call them â€śditch liliesâ€ť because they can be found on old homesteads and along random roadsides.

They are hardy perennials also known as â€śpass-alongâ€ť plants. Gardeners frequently share them by digging up a clutch in any season and passing them along to other gardeners.Â

Daylilies transplant easily, multiply quickly and are found in most garden centers. So if you donâ€™t already have them, you can get them.

They can survive in shade, but in full sun, youâ€™ll have lots more flowers. Thousands of varieties exist, but a few of the flashy ones can cause indigestion. So stick to the common, orange-flowered daylily.

Enjoy Daylilies in the Spring

Like many garden plants, daylilies go dormant for the winter. The leafy shoots come up tender and sweet in the spring. Snip them off just above ground level while they are no more than 3 to 5 inches tall.

At this point, they’re tender enough to eat raw in salads but also tasty stir-fried with butter and garlic.

When the shoots get taller than about 5 inches, they become too tough to enjoy.Â

By late spring, finger-sized flower buds will poke out. Whether young, small and green or big, orange and about to open, you can eat them. Some say they taste a bit like green beans.Â

Daylilies in the Kitchen

I pop a few these succulent, crunchy gems in my mouth when I find them in a garden (after nipping off the attachment to the stem). They can also be stir-fried, tossed in soups or pickled. The petals of open flowers are also edible on daylilies.Â

Remove the pistil, stamens and stem first. The petals can be dried in the oven on its lowest setting or in a dehydrator. Crumble the dried petals and sprinkle over pasta or a side dish for a touch of bright, appetizing color.Â

In late fall, when the leaves have died to the ground, dig up a few plants and harvest the tubers until spring. (Plus, you can divide the plants.)

Treat the tubers like other root crops. Slather with oil, salt and pepper, and roast at 450 degrees F until tender.Â