Dealing With Invasive Apple Trees? Let Some Grow To Maturity

If you have wild, invasive apple trees taking root on your farm, why not let a few grow to maturity and see if they produce desirable fruit? 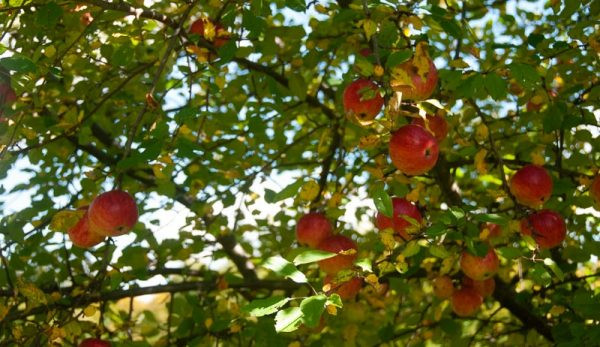 Believe it or not, apple trees can be one of the more stubborn invasive species on farms. A few years back, I described the surprising but not especially uncommon way wild apple trees can take root in abandoned fields and eventually grow to large sizes.

Usually farmers remove these marauding apples before they reach maturity. After all, who wants to lose a farm field to wild trees?

But maybe we shouldnāt be so quick to grab the pruning loppers.

There are many less desirable invasive species to worry about, and besides ā¦ wouldnāt it be interesting to let a few of these unheralded specimens mature and produce fruit, if only to test their taste?

Read more:Ā What makes a good pair of pruning loppers? Here are a few tips for buying.

Remember, proven apple cultivars have been carefully chosen for desirable traits. And theyāre reproduced through graftingānot by seed.

Let natural pollination work its wonders, and each apple seed becomes an experiment in unplanned genetic mixing. The resulting tree might produce small and/or sour fruit. Or it might turn out to be the next McIntosh or Wolf River apple.

Both of these famous varieties of apple trees were discovered growing wild and subsequently reproduced through grafting.

Through the years, Iāve allowed a large handful of wild apple trees to reach maturity on my farm, with mixed results. My fascination began with a quirky little tree growing horizontally out from beneath the lower branches of windbreak spruce trees.

I cut off a few of the overhanging branches to give the apple tree more light, and was delighted to see it blossom beautifully the following year. Ultimately it produced 750 large crabapples, shiny and light red in appearance.

Another tree, growing along a fence line, has likewise favored beauty over taste. Every year it produces huge blossoms, nearly 2 inches across. And the first year it produced apples, I was excited by their bright red and glossy appearanceātruly a sight to behold.

I brought one back and cut it open. Inside, the flesh was white and crisp. It looked delicious! But appearances were deceiving, and that apple ranks among the sourest Iāve ever tasted.

Read more:Ā Check out these 5 trees that are great to plant for a windbreak.

About a week ago, I was cutting a trail through a wooded section of my farm and came across an apple tree growing in the midst of birch and maple trees. Iām not sure how it gets enough sun to grow fruit, but somehow it had found the means to produce a scattering of medium-sized yellow apples.

I picked one, gave it a taste ā¦ and was pleased by something vaguely resembling a sweet flavor! My pleasure lasted for a few seconds, just long enough for a sour aftertaste to kick in.

Still another wild tree, growing in full sun on the edge of a field, caught my attention a few days later. Iāve had my eye on it for years, watching it grow slowly but surely, and this year it delivered a surprisingly large crop of lovely red, striped apples.

Undeterred by my previous experiences with wild trees, I gave one a try. I discovered a mildly sweet flavor without the typical sour undertones!

I took a second biteāit was just as good. Not anything to write home about, but certainly edible. I broke the core apart to check the color of the seeds. They were mostly brown, but not fully colored, so with a little more time to ripen, the sweet flavor of the fruit might grow even stronger.

Suffice to say, Iām looking forward to further taste-tasting this promising new variety. If you have invasive apple trees growing on your farm, I encourage you to follow the same path and let a few reach maturity.

Itās fun to sample the flavors, and who knows? Perhaps youāll discover the next McIntosh or Wolf River!