Deer are persistent, and keeping them out of your orchard or garden requires a good fence. These tips will help you prevent their entry. 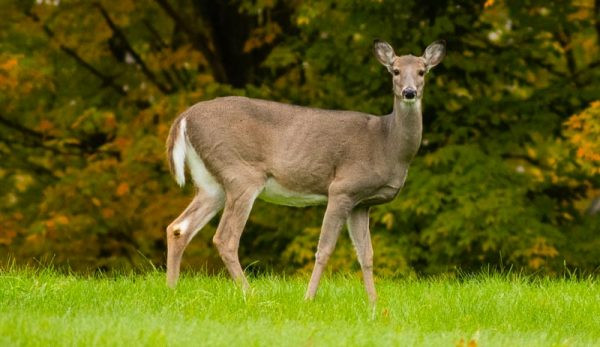 Now that spring is here and the ground has dried up enough for work to be done, Iâ€™m ready to tackle the construction of a large (and hopefully imposing) fence to protect the young orchard that I planted last summer from being quietly consumed by hungry deer.

In preparation for the project, Iâ€™ve done a lot of research about the type of fence Iâ€™ll need. How high should it be? How strong should it be? Are there any special considerations to keep in mind?

Ultimately, Iâ€™ve settled on constructing an eight-foot barrier made from black plastic deer fence, but along the way Iâ€™ve learned a lot of helpful tips that Iâ€™ll put to use. If youâ€™re considering building a similar fence to keep deer out of your orchard or garden, let me save you some research and share these five insights that Iâ€™ve learned.

Deer are remarkably athletic creatures, capable of jumping extraordinary heights. The general consensus is that a single, upright fence must be at least eight feet tall to prevent them from jumping over it.

An alternative to a tall fence is the construction of two shorter fences, one inside the other, with a gap of five or six feet between them. Deer can jump high, and they can jump a long distance, but they canâ€™t do both at once. They also have poor eyesight, and a double barrierâ€”even if neither one is particularly tallâ€”is an obstacle too imposing for them to jump. You can achieve a similar effect by slanting a tall fence outward so that it looms as a wider and seemingly riskier barrier, at least in the minds of the deer.

3. Make Sure the Bottom Is Secure

If they canâ€™t jump over it, theyâ€™ll try to go under it. For plastic and welded wire fences, make sure the bottom of the fence is secured to the ground in between postsâ€”otherwise, persistent deer will nose around the base and quite possibly crawl underneath. I plan to use ordinary metal tent stakes to pin down my fence every six feet or so.

Deer can exert a lot of pressure on fencing, so avoid spreading the posts too far apart, which puts more pressure on the fence itself (the weakest link) rather than on the sturdy posts. It also increases the likelihood that the fence will sag in between posts and encourage deer to jump over. Eight to 12 feet between posts is an ideal distance.

Black plastic and welded wire fences can be difficult for deer to see, and the last thing you want is for a deer to run headlong into a fence and break through. You can remedy this to some extent by tying brightly colored ribbons in between posts. These serve as a visual marker to warn the deer that a barrier exists. Just donâ€™t tie the ribbons to the top of the fence, giving the deer a clearer picture of how high the fence standsâ€”tie them about four feet above the ground instead.