For the past several years we have had a bit of a deer problem in our front yard and garden. When we moved into our house, I knew there was the potential for deer problems, and they seem to be getting worse as time goes on. 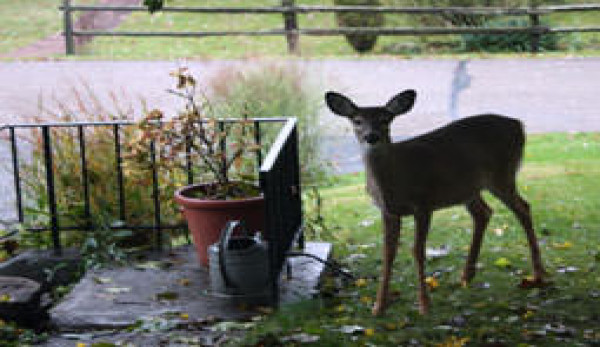 For the past several years we have had a bit of a deer problem in our front yard and garden.Â  When we moved into our house, I knew there was the potential for deer issues, and they seem to be getting worse as time goes on. I think this year theyâ€™re going to be worse then ever because the wooded lot across the street has now been turned into a large house and lawn.Â  It seems that when humans take away some of their open space, the deer tend to exact their revenge by consuming something cherished out of the garden.Â  Ugh.

I mentioned in aÂ past post about how the deer were nibbling all sorts of plant material in our front garden. Not eating it to the nub, thank goodness, but taking a nice bite out of everythingâ€”even the stuff they arenâ€™t â€śsupposedâ€ť to like.Â  We ended up netting in our boxwood (which were planted there specifically because they areÂ not deer favorites), our dogwood tree and a few other things. This year, the deer ate all the berries off my winterberry shrubs the night before I was going to cut them and use them in our Christmas centerpiece. They were well-mannered, though, because they only ate the berries and not the twigs. How nice of them.

The really bad news for us is that when I went out yesterday morning to let theÂ chickens out of the coop, I found two separate lines of deer tracks running across the backyard; one big and one small.Â  A doe and her fawn perhaps?Â

To get there, they had to jump our triple layer, split rail and chain-link fenceâ€”something theyâ€™ve only done once to my knowledge in the past four or five years.Â  I hope they did it because they got spooked and donâ€™t make a habit out of it.Â

I scouted around my plants and fruit trees to see if they had lunch while they were here.Â  Some yew tips were eaten, but thatâ€™s all I found.Â  Iâ€™m really, really hoping they donâ€™t come back and discover our young fruit trees.Â  Mostly because we have waited so long for them to get as big as they are, and Iâ€™m not a very patient person.Â  I think maybe Iâ€™ll go out and spray them with a deer repellant just to be sure.Â

Every time I think about our deer problem, though, I am reminded of a gardening friend who once told me about her super deer. One night she and her husband were woken by a thumping and rattling sound. They came down stairs to find a buck banging itâ€™s nose against the glass of their sun porch in a fruitless attempt to eat the houseplants inside. The same buck was found a few weeks later eating the pine garland Christmas decoration from around their front door. He had walked up several steps and right onto their front porch. After she chased him off, she looked at the garland and saw that the buck had also eaten the light cords and bulbs threaded through the garland.Â  Remembering that always makes my deer problem seem barely a problem at all.Â Â