The historical Delaware chicken is a wonderful provider of eggs and tender meat. Hens lay approximately 150 to 200 medium- to rich-brown eggs yearly. 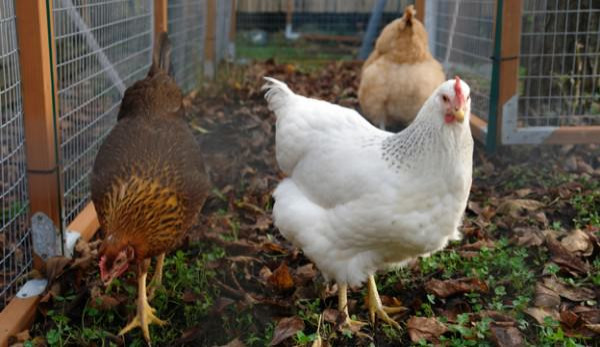 Use: The historical Delaware chicken is a wonderful provider of eggs and tender meat. Hens lay approximately 150 to 200 medium- to rich-brown eggs yearly. Farmers who want to raise broilers on a small scale should consider keeping this breed.

History: Developed in America by George Ellis in 1940, the Delaware chicken breed is derived from off-colored sports that occurred in the cross breed of a Barred Plymouth Rock rooster and New Hampshire hen. This cross resulted in a unique black barring on the feathers of the mainly white chicken. For nearly 20 years, the Delaware was the meat bird of choice along the entire East coast until the breed was replaced by the Cornish Rock cross in the mid 1950s. It was accepted into the American Poultry Associationâ€™s Standard of Perfection in 1952.

Conformation: Delaware chickens are medium-sized and heavy with meaty carcasses. The breed has a moderately large, bright-red single comb with five well-defined points. Its plumage coloring is mainly white to silvery white on the body and breast. Black barring is present on the hackle, tail and wings. Quills and shafts are white, and shanks are yellow. Standard Delaware cocks weigh 8Â˝ pounds and hens weigh 6Â˝ pounds; bantam cocks weigh 34 ounces and bantam hens weigh 30 ounces.

Special Considerations/Notes: Delaware chickens are hardy, quiet, and able to tolerate both confinement and variable weather. Slow Food USA has included the Delaware in its Ark of Taste, a program that promotes the production and consumption of foods in danger of extinction. The breed is listed in the Threatened category of the American Livestock Breeds Conservancyâ€™s Conservation Priority List. It would make a great choice for hobby farmers interested in rare chicken breeds that are a dual-purpose alternative to the Cornish cross.