This Deluxe Coop & Chicken Yard Is Funky By Design

When Tammy L. Haurilick decided to get chickens, she called on friends and her artistic skills to design a funky chicken yard and coop! 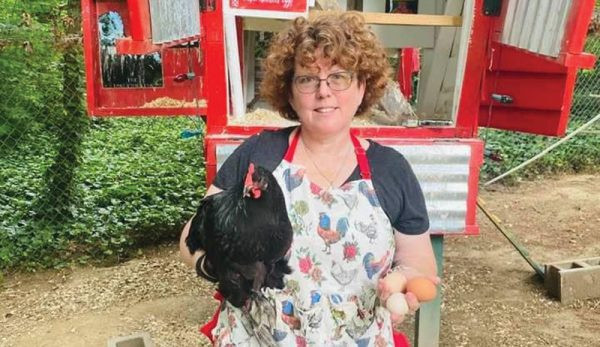 by Chicken ChatMarch 30, 2022
PHOTO: All images by Tammy L. Haurilick

I have always wanted to own a small patch of land, grow veggies, and have chickens and a miniature cowâ€”a small but eclectic happy place. I bought my house in Hendersonville, North Carolina, in 2014 and immediately started planning to make a safe and secure place for the chickens-to-be.Â

First and foremost, I read Chickens for Dummies and, of course, Chickens magazine and joined a couple of Facebook groups, asking questions and reading posts. But, me being me, I knew I couldnâ€™t have a normal chicken coop. I started looking for quirky coop ideas and finally found one that spoke to me.

However, I lacked the tools and know-how that were required to make such a funky little â€ścoopsicle.â€ťÂ

Read more: Third time is the charm for this chicken-keeping Ohio family.

When I was an art teacher, I relied upon donations of paper, paints and other odds and ends to make my curriculum shine. I knew that reaching out to the community was one way to get things done and also include kids to become involved in community projects.

With that in mind, I approached a local high school shop teacher and told him of my idea.Â

I ended up giving the shop class a â€śdonationâ€ť and the blue prints to my dream coop. The students signed on to make a coop as their senior project, meaning it would take upward of a year to complete. I told the students that if they had any weird ideas, they should go with themâ€”the weirder, the better.

Meanwhile, I prepped the yard, bushwhacked the underbrush and looked for cost-effective fencing. During the year, the shop teacher would send periodical photographic evidence of the progress of the coop, and I would get more excited. As the year progressed, I got the more-mundane-but-necessary aspects of the chicken yard together.Â

At my job at the veteransâ€™ administration, we have a little group in our department that we call the â€śWoodchuck Clubâ€ť where we call out to our members when we need help with certain house/yard projects. Everyone shows up, pitches in and tackles the job. Usually pizza and beer are involved, but mostly we come together to help out and have fun.

This is how I got my fence-post holes dug and beams put in. The fencing came along later when one of my friends sold me their old chicken wire and fencing.

After another Woodchuck Club callout, we spent the better part of a morning tearing down one memberâ€™s chicken yard and rolling up the fencing and deer netting that protected the overhead. It was enough to encircle my small chicken yard.Â 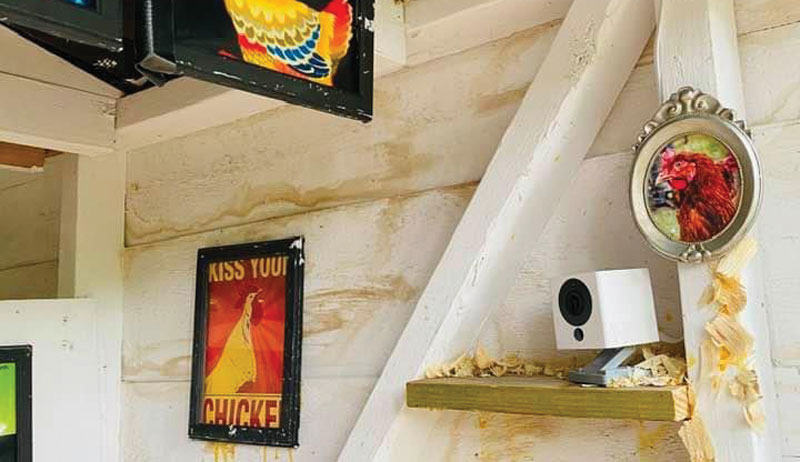 Spring came round, and the coop was finally delivered. The teacher and some of his bigger students unloaded it in the backyard. Then they carefully raised it, placed it on the 4-by-4-inch posts and secured it in place.Â

The hardest work complete, it now fell to me to start to put on the finishing touches. Painting was a breeze, but the interior touches I knew would take a while, as I was going a little crazy on Pinterest gathering ideas. I was having to wait to get the fencing put up as that would take another gathering later on in the summer. So I had time to start making the inside of the coop easy to clean and interesting at the same time.Â

I laid down the sticky back flooring that looked like wood because I wanted to be able to easily clean it. But I then learned that the chickens might find that too hard to walk on, so down went a layer of sand and then wood chips.Â

Read more: Check out these 5 treats to keep your backyard chickens happy!

I bought some old torn-up picture frames and printed pictures of alternative chicken-themed movie mash-ups. Then, I put in a childrenâ€™s xylophone for the hens to plunk and plink about on when they got bored.Â

I brought over two old flower boxes that were rotting away to line the pathway to the door to the chicken yard. I ended up raising them up on cinder blocks, painting them and filling them with chicken-friendly plants. Another cinder-block project went in next to the yard, a bench with cushions so I could sit and admire my chickens from a location that stayed shady all day.

The planks that went up to the coop were spray painted in rainbow colors just because it looked cool and bright and happy. On the door into the coop yard are the names of my girls, a list of treats (painted in green) that chickens can have and a short list of things (in red) that they canâ€™t have. 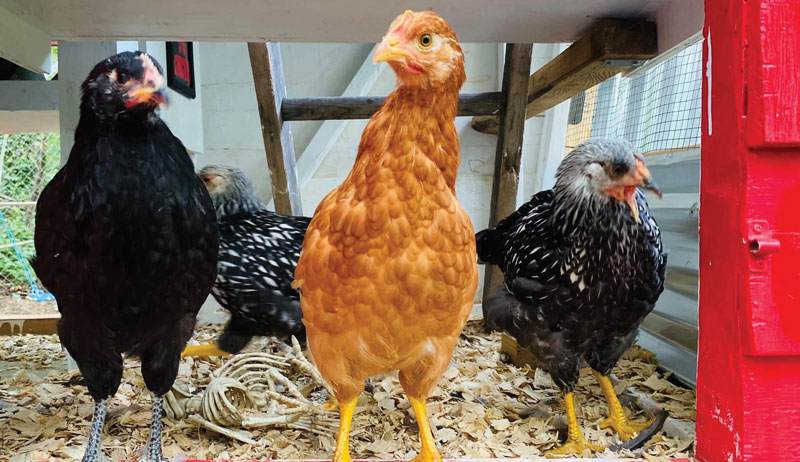 All in all, it took 4 years, from dropping off the coop plans to the shop class to the day I finally brought home the chicks, until the time I finally released the fully feathered pullets out to the yard.Â

Â I spend a lot of time out in the backyard in the summer, tending to my girls or sitting on the bench and just listening to them cluck and fuss about the yard. Itâ€™s very relaxing and peaceful. The final touch was adding cameras so I can tune in and check on them from wherever I am to make sure theyâ€™re happy.Â

Tammy L. Haurilick lives with her family and flock in Hendersonville, North Carolina. This article originally appeared in the March/April 2022 issue of ChickensÂ magazine.