Different Ways To Protect Your Sheep Against Predators

Sheep are vulnerable to a number of predators, so it's important to plan ahead to protect your animals against threat. Here are a few different options. 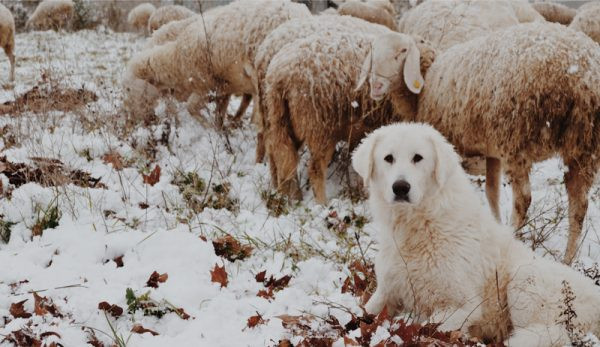 Before we even got sheep, my husband and I discussed various ways of keeping our sheep safe from predators. Having had poultry for 15 years, I know how important it is to protect your livestock.

And then a herding dog clinician who has many decades of experience and knew of our set-up said to us, “Iâ€™d just put them up at night.â€ť

So that got me wondering: What is the best way to protect your sheep against predators? Well, the best (and least satisfying) answer truly is â€¦ it depends.

I spoke to Denice Rackley, owner of Clearfield Stockdogs and a sheep producer for 20 years. She has a large farm in southern Indiana and uses several livestock guardian dogs (LGD) to keep her sheep safe.

For her, the LGDs are the best and most workable option. She says they live out with the sheep 24/7, are gentle with the sheep (or should be if you are going to use them) and ferocious with anything that comes in or near the field that should not be there.

But, according to Denice, getting the right dog for the job is probably one of the most important choices you will make when looking to protect your sheep. In fact, she says one of the biggest mistakes people make in selecting an LGD is â€śnot being selective enough in finding a breeder.â€ť

Finding a breeder who breeds dogs specifically for this job is key, she says.

Denice is also an accomplished writer and has a great three-part series in Acres USA about choosing, raising and training an LGD.

We decidedâ€”for nowâ€”against an LGD because of our small space and close proximity to neighbors. LGDs do much of their work at night, including barking, which would not make us popular in the area.

Donkeys and llamas are also another option. A sheep-keeper friend who lives nearby swears by her two miniature donkeys as awesome protectors against neighborhood dogs and coyotes. Female donkeys (also called a jenny) are probably better than the males (called a jack) to live with sheep.

The donkeys may get to know your working dogs, but they could kick a pet dog that wanders into the sheep pasture. And itâ€™s best to be careful with donkeys when you are lambing, as they could harm a small lamb. Denice told me that if you were going to get a jenny, it would be best to raise a young one with your sheep so that she could bond with them.

One upside of both donkeys and llamas is that they eat the same stuff as the sheep. That makes taking care of them a lot easier.

A potential downside for some people is that, if they use stock dogs to move their sheep, they most likely will have to tie up or pen the donkey or llama before allowing a stock dog to do its work.

Llamas have worked really well for some people, but from what I have read, success in using them is not as significant. And, bear in mind that they will need to be sheared.

If you keep wool sheep, this might not be a big deal. But for those with hair sheep, thatâ€™s a job they would probably just as soon forego.

Fencing: Hot or not

I think itâ€™s safe to point out that good predator protection of any kind starts with a good fence. But a fence alone may not be the answer.

Iâ€™m very lucky to have a number of friends and acquaintances who are experienced and are very good at raising sheep. So, when I was researching the sheep-predator protection issue, I got in touch with a friend in Kentucky who has had sheep for many years. The last time I saw her, she had a very protective donkey in her field,

To my surprise, she told me that these days she has replaced her donkey with a hotwire around the perimeter of her fence. She says she uses it everywhere she can keep the fence line clear and uses electro netting in the places where the brush precludes a hotwire.

â€śGuard animals are great, but I have to say, I donâ€™t miss taking care of an extra animal, sorting off when I work the sheep and the varying levels of protection. Electricity is a sure-fire deterrent, in my opinion.â€ť

In the end, we decided to go with what is loosely called â€śnighttime penning.â€ť In the truest sense of the term, it means bringing sheep together near a building or near humans at night as a way of keeping predators away.

We have two main pasture areas, so we decided to put the sheep up each night in a locked barn and let them out each morning.

Denice did warn me about taking the sheep to the same place each night as a way of exposing sheep to and building up a worm problem. So, to that end, we are adhering to a fairly strict schedule of worming the sheep to ensure this doesnâ€™t cause problems.

Penning the sheep each night and releasing them each morning might not be the solution for everyone, but we have raised poultry for 15 years and it has become part of our daily routine here on our farm.

In my part of the country, the greatest threats are coyotes and neighborsâ€™ dogs. UC Davis has a table that looks at the various ways to protect your sheep against different predators.