My Riding Mower Shows Me The Value Of A Differential Lock

It's not a prominent or oft-used feature, but the differential lock on a tractor or mower can get you out of trouble under the right circumstances. 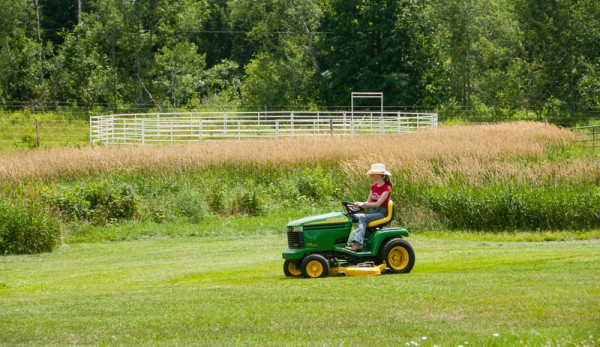 It can seem like modern tractors have so many features and controls that itās hard to memorize them all and put them to use. The main features are easy enoughāthe controls for the hydraulic lift, or for engaging the mowing blades on a riding mowerābut other features (such as the differential lock, whose value I recently learned) see less frequent use, even if they can be quite handy under the right circumstances.

Recently, I was using a riding lawn mower to mow the edges of a field. The grass, although not terribly tall, was nevertheless high enough to block from view an anthill covered with grass. In other words, it wasnāt just a pile of sand and dirtāit was a tough little mound that wasnāt going to be pushed over.

Before I knew it, I had driven right across the top of the anthill, and suddenly the mower wasnāt moving anymore. The mound was just tall enough to bottom out the mower and raise the right rear wheel slightly off the ground, which meant that the mower was stuck.

Frustrated that the mower was stuck (and confused as well, as I hadnāt seen the anthill at this point), I considered my options. An attempt to push the mower forward did nothing, as itās quite heavy and wasnāt interested in moving. I considered firing up a larger tractor to tow the mower to flatter ground, but then I tried one of the mowerās more obscure featuresāthe differential lock.

But first, allow me to backtrack. The mower was stuck in the first place because it has a differential, in essence a gear train that lets the two rear driving wheels spin at different speeds. This is important for the mower to make tight turns without damaging the tires, but in some circumstances, it can cause difficulty. In my case, with the right wheel raised slightly off the ground, the left wheel was being asked to do all of the work, and because the mower was stuck and reluctant to move, the left wheel essentially gave up any effort to move and threw all the power to the right wheel, which spun helplessly and did nothing to free the mower.

So thatās what I did. Starting up the mower once again, I engaged the differential lock and slowly pushed the accelerator. The left wheel, as if finally realizing that the task wasnāt as hard as it seemed, gripped the ground and almost effortlessly drove the mower forward and off the anthill.

In the end, freeing the mower was simple, thanks to a little-used feature that was there when I needed it. A tractor can never have too many features.