Noah Young from the Nebraska-based Shiloh Farm tells us how empty supermarket shelves during the start of the COVID-19 pandemic inspired him to take matters into his own hands. 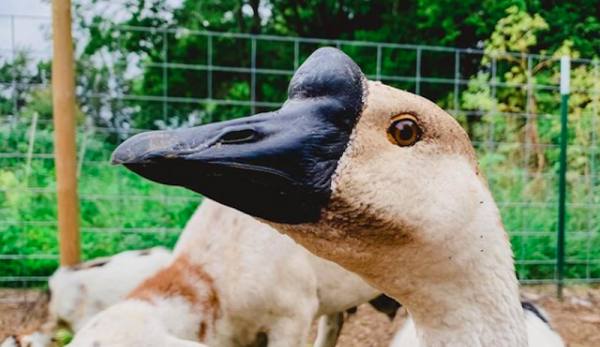 Noah Young didn’t grow up on a farm. But living in Nebraska, he came up around an agricultural environment.

“One in four people are farmers, so I was kinda surrounded by it,” says Young of his home state. After gaining a degree in agricultural business, Young duly went on to launch The Shiloh Farm, a self-sustaining family venture that mixes up bountiful heirloom crops with African geese.

We spoke to Young about how the Nebraska climate and terrain affect The Shiloh Farm’s crops. He shared his tips for keeping chatty geese quiet. And we got into the joys of cooking a chicken noodle soup literally produced from scratch.

Young studied agricultural business in college. But in the early wave of the COVID-19 pandemic, he decided to go ahead and start a family farm.

“During COVID, when all the shelves were empty, that was the moment for me where I thought, I need to start growing some food!” he recalls of the roots of The Shiloh Farm.

Grappling with the Nebraska Climate

Young says that the climate and the terrain in Nebraska play a large role in determining how he farms.

“I have a lot of friends down in Texas where they grow 52 weeks of a year,” he explains. “But where I’m at, we don’t have that season. So I’m really focused on producing as much as I can during a short window, then storing that.”

Young adds that he learned to view the wintertime as an apt period to prepare for next year’s spring and summer seasons.

African geese make up some of the standout residents at The Shiloh Farm. And Young says that the eye-catching waterfowl really like to talk.

“I film a lot of videos of the geese, and you can hear them in almost every single video!” he says with a laugh. “They’re loud, but they’re fun. They like making sure people know they’re around.”

When it comes to keeping African Geese quiet, Young recommends sneaking off out of sight behind the back side of a building. Then, strategically place a pile of grain for them to discover and busy themselves with.

Introducing the Cadillac of Carrots

If you scroll through The Shiloh Farm’s Instagram account, you’ll come across some super vibrant looking carrots dubbed “the Cadillac of carrots.”

It turns out the striking root vegetables in question are an heirloom variety called Longue Rouge Sang. Young originally sourced them from Baker Creek Heirloom Seeds in Missouri.

“I’m always interested in growing different things,” says Young. “As far as the flavor, they’re incredible. And a lot of our customers say they’re the craziest carrots they’ve ever tasted.”

Read more: Check out these tips for growing flavorful carrots.

Highlighting the nourishing nature of running a family farm, Young says he takes immense joy in sitting down to a supper he and his family prepared from top to bottom.

“There’s nothing like making chicken noodle soup and knowing we’ve got the noodles that we made with our own flours, the carrots and celery that we grew and the chicken that we raised ourselves,” says Young. “There really isn’t anything better.”