Zach Scherler-Abney from the Oklahoma-based venture tells us how farming their own food is helping his wife, Kacie, recover from an autoimmune disease. 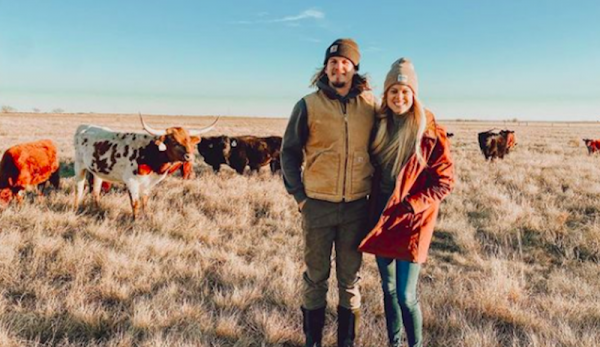 Following Kacie Scherler-Abney’s diagnosis for a rare autoimmune disease known as MOG Antibody, her search for an effective treatment led to the autoimmune protocol diet. With clean protein playing a pivotal part of the diet, Kacie and her husband Zach decided to take matters into their own hands and embrace regenerative farming methods.

“We couldnâ€™t find anything that met our standards locally,” recalls Zach. “So, we decided to raise what we needed ourselves!”

So began Re:Farm, in south west Oklahoma. The venture draws inspiration from other regenerative farmers, including Richard Perkins, Joel Salatin and Greg Judy. “We’re grateful for all of their willingness to share their knowledge,” says Zach.

Zach took a moment out from farm duties to chat about striving to become carbon negative. He also discussed the mischievous nature of pigs and joys of watching cow herds move.

According to Zach, Re:Farm runs on the basis of five soil health principles that determine the venture’s grazing plans.

The principles include making sure to “leave ground cover or soil armor at all times. No tillage. Plant diversity is necessary for ecosystem health. Continual live roots maintain soil microbial life. And livestock integration enables the regeneration of the plant and nutrient cycle.”

Read more:Â There’s a new regenerative farm certification in the works. Is it right for you?

When it comes to implementing Re:Farm’s five golden principles in a bid to reach a carbon negative state, Zach says that “even when we don’t get it perfect, Mother Nature is generally pretty forgiving as long as you genuinely attempt to work alongside her rhythms and seasons.”

Zach adds that over the three years that Re:Farm has operated, he and Kacie noticed an increase in plant diversity and insect life. “We hope that our soil tests moving forward continue to display that regenerative agriculture is capable of improving the land,” he explains.

Pigs form a key part of life at Re:Farm. “Our pigs are by far the most personable animals,” says Zach.

“They’re very easy to anthropomorphize. And each one has its own unique vibe. Some are friendly and curious. Some are talkative. and some have a little mischievous streak (they’ve been known to steal my shiny silver pliers out of my pocket). But all of them are kind and enjoyable to be around.”

“Eating a meal grown on your own land by your own hands is a special experience that we’re very grateful to be able to partake in,” says Zach.

Asked about some of the daily rewards that come with running a farm, Zach says “watching the cow herd move to fresh grass every evening never gets old and has been a daily reward for us.”

He adds that witnessing the herd’s movement acts as a respite from the stresses of owning and operating a farm.

“Watching the cows move to fresh grass as the sun starts to set is always a rewarding reminder of the beauty of farmingâ€”and the importance of the role we have as caretakers of the land we manage.”