Divide Your Perennials, Conquer the Garden

Increase plant density or gift plants to friends by dividing perennials with these tips. 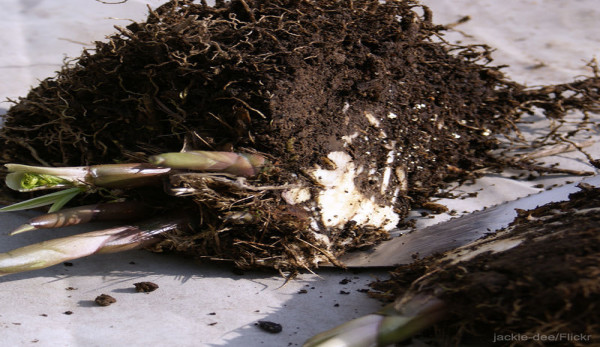 Sharing is one of the best reasons to divide plants from your garden. I always enjoyÂ gifting plants to friends while at the same time cleaning up the beds, culling overzealous plant invaders and increasing my own plantings. As a result, the beds look neat and the plants are rejuvenated.

Many widely used perennial plants, such as daylilies and hostas, can be divided in spring just as the tips are emerging from the soil. You can dig up a clump and divide it in half or thirds, depending on its size, and give some away and replant the rest in your garden. There is less chance of damaging the new growth early on, as early planting allows the plant to establish before hot weather and drought set in. When replanted, theyâ€™ll continue to grow and bloom at their usual time or just a little later.

Get the Season Right
Some plants need to be divided at a specific time; for example, iris usually needs to be divided in July or August after itâ€™s bloomed. Keep the healthy rhizomes that have at least one growing point and discard the rest. Replant them immediately (or give them away), and cut the leaves back to the leaf divide to help them reestablish new roots. In the absence of rain, keep them moderately watered until they start growing again.

Bulbs, such as daffodils, need to complete their growth and die back before dividing. This replenishes the bulb with nourishment for the next growing season. You can mark where in the garden these were growing using a plant stake and come back to them later. Transplanting in the fall should be done at least four weeks before the first freeze so the roots can become established before winter sets in.

Ornamental grassesÂ are best divided in the fall. Itâ€™s hard to divide a tall plant and get the stems to return to standing after youâ€™re done. Cutting them back to 6 to 12 inches above the ground and then dividing will get them established before seasonâ€™s end, and theyâ€™ll be ready with beautiful new growth next spring.

Some perennials will tell you when they need to be divided. Their flowers will become smaller, or the clump will become sparse or develop a hollow middle with the newer plants growing in a ring around it. Otherwise, most can grow for years unless you want to divide to increase your plantings or share with a friend.

Know Your Root Systems
It helps to know whether a plant has a fibrous root system or a taproot system to determine how easy it will be to divide. The roots in a fibrous system branch several times as they grow, forming a ball of roots underneath the plant, and are typically shallow growing and easier to dig up than taproots. A taproot is a larger, central root that grows deep into the soil, with side roots branching off from it. Because of the depth of the taproot, it is sometimes hard to dig it up without breaking or damaging it, making success difficult.

To separate fibrous-root plants, tease the roots apart with your fingers. On plants with tuberous roots or heavy crowns (the base of the plant where the stems meet), you might have to use a knife or sharp spade to cut them.

Divide in Shade
Avoid dividing a plant in the morning or midday when the weather is hot. Waiting until evening or a cloudy day will help the new plant along until it gets settled. Better yet, wait until rain is forecasted for a day or two. Water the plant thoroughly one to two days in advance so it will be well-hydrated when you divide it. If sharing with friends, have pots or plastic bags ready to receive them with some moist soil around the roots, or if you are moving them to a different location in your garden, make sure you have the planting hole prepared. Once you divide your perennials, theyâ€™ll turn their attention to re-growing roots and might produce fewer blooms for this season. If the new clumps are small and a lot of space is around them, you can fill in with seasonal annuals.

This article originally appeared in the January/February 2014 issue of Hobby Farm Home.