Gift your special someone with a flower arrangement specially designed for your bathroom. 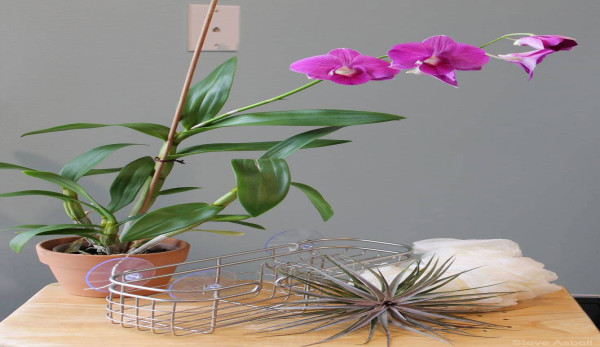 If you need an alternative to the same old vase of cut flowers, think beyond the table-top dĂ©corÂ and create aÂ flower arrangement that will turn bathtime into a tropical spa getaway. Using nothing more than a shower caddy, a loofah, orchid bark, an orchid and some air plants, you can create a vertical garden that will live happily in any well-lit bathroom for many winters to come. Best of all, it’s mess-free and easy to care forâ€”all it needs is bright light and an occasional splash of water while showering.

The reason this vertical garden works is that each of the plants included are epiphytesâ€”that is, plants that naturally grow on the bark of trees. There are many different types of epiphytes available at your local garden center, including mistletoe cactus (Rhipsalis), air plants (Tillandsia), orchids, bromeliads, along with many different ferns. Even Christmas cactus and Easter cactus can be grown epiphytically. If these plants are unavailable at your garden center, you can even try using succulents like Echeveria, Sedum or Haworthia. Feel free to switch up your arrangement depending on your tastes.

TheÂ orchid I used in my arrangement is a common Dendrobium. When youâ€™re shopping around for an orchid to use in your own shower-caddy garden, sniff around and choose one with a great scent. My personal favorite is Oncidium Sharry Baby, which has an aroma that some compare to chocolate and others liken to lemon meringue.

While other houseplants requireÂ potting mix that would slip though the netting and make a mess, orchids and other epiphytes use orchid bark or sphagnum moss. These materials are easy to find at your local garden center near the potting mix or houseplants.

There are lots of different shower caddies you can purchase, from those that hang from the shower curtain rod or showerhead to ones that sit on the edge of the bathtub. I chose one that sticks to the shower wall via suction cups so that I could put the arrangement at eye level where it can be fully appreciated. Other alternatives to shower caddies include slat wood orchid baskets, hanging orchid pots or a hollowed out segment of bamboo.

The loofah is what holds the arrangement together, as the netted plastic material can be cut out to line the caddy and prevent bark from falling through and making a mess in the bathtub. Youâ€™ll use such a small amount of the netting that you can continue using the loofah after youâ€™ve cut what you need for the arrangement. The plastic loofah is preferred to natural materials to avoid mildew, but feel free to experiment with other materials that you like.

Step 1
Using a pair of sharp scissors, cut into the plastic loofah where it bunches together and unravel the netting. You will use this to line your shower caddy and wrap the orchidâ€™s roots.

Step 2
Before removing the orchid from its pot, water it to help the roots loosen their grip. If the orchid is in a plastic pot, squeeze it from different angles while you gently twist and tug at the orchidâ€™s base.

Step 3
Once you remove the orchid from its pot, wrap one layer of the loofah netting around the sides of the orchidâ€™s roots and another layer around the base.

Step 4
Line the caddy with loofah netting so the bark will not fall through the gaps. If you have a hard time keeping it in place, use twist ties or wire for now and remove them when finished.

Step 5
Place the lined orchid into the lined caddy. To keep it from toppling over, use a thin piece of the loofah or a twist tie to loosely tie the orchidâ€™s stem to the caddy. Donâ€™t tie it too tightly, since it could damage the plant.

Step 6
Arrange the other plants in the caddy around the orchid. Hold the plant in place, and start filling the area around the roots with orchid bark. Air plants (Tillandsia) need their roots exposed in open air, and can either be attached to the caddy itself or placed on the surface of the orchid bark.

Step 7
Water the plants in the caddy, moisten the suction cups and attach it to the wall. Follow the care tips below.

What the Plants Need:

About the Author: Steve Asbell is the author of Plant by Numbers: 50 Houseplant Combinations to Decorate your Space. He is also a blogger and illustrator, and his writing and art can be found at The Rainforest Garden.