Do You Have Poison Hemlock In Your Sheep Pasture?

Poison hemlock is creeping into new areas these days, so you need to check your sheep pastures to make sure this toxic, invasive plant isn't present. Here's how. 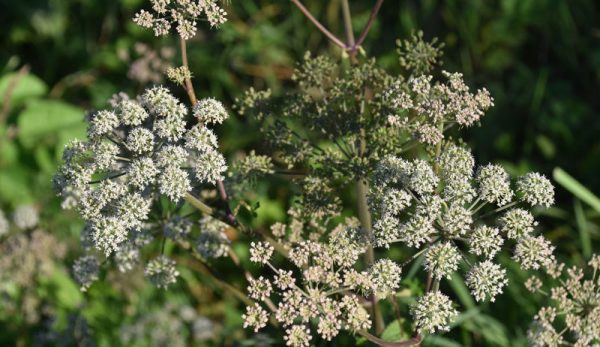 Last year, as I was helping my friend Denice (who is my sheep mentor as well) fence off a new pasture, she told me to make sure there was no poison hemlock inside the electronet fence.Â

That stopped me cold. Really? From a plant they eat? The answer is yes. Poison hemlock is bad newsâ€”from the roots and stems to leaves and even flowersâ€”for people and animals.

And believe it or not, I actually did find some poison hemlock on her property!

According to the US Department of Agriculture, Poison Hemlock (Conium maculatum) grows throughout the United States. It’s not native to the U.S., but it has been around a while.

As part of the parsley and carrot family, youâ€™ll find it along roadsides, fences and other areas that may have been recently cleared or worked.Â

Read more: Check out this first-aid checklist designed to keep your sheep happy and healthy.

Poison Hemlock Is on the Move

Apparently in the last year or so, this hazardous plant has crept into more populated areas as well, which makes some conservationists mighty nervous.

One reason for the surge this year in the Midwest is the large amount of rainfall. This has made for the moist ground that poison hemlock likes.

But it’s always a good idea to check for poison hemlock in your pastures and other areas where your sheep have access. This way, you can make sure this plant is not growing anywhere on your property.

Be on the Lookout

When we put up a fence for a new pasture earlier this year, I scoured every foot of the land to make sure we did not have any of this invasive plant.

It is a biennial plant, which means that it will not flower the first year. But it will the second year. So, you need to know what all parts of the poison hemlock plant look like to protect your sheep.

The most likely time sheep may eat poison hemlock is in the spring, when the leaves are tender and young.Â

However, right about now is when the plant is largest and most noticeable. And itâ€™s also the time that youâ€™ll see a tall stalk with lacy white flowers that looks a bit like Queen Anneâ€™s Lace from far off.

Those pretty (and pretty deadly) white flowers can produce up to 30,000 seeds to spread far and wide.

But hereâ€™s how to tell the difference. The poison hemlock stalk is mottled purple and green, which is what sets it apart from Queen Anneâ€™s Lace and other plants that might look like it.Â

Read more: Tomatoes and carrots are great. But their poisonous wild cousins are definitely not.

Sheep can be poisoned–and frequently die–when they have eaten as little as 4 to 8 ounces of the hemlock leaves. They will show signs of respiratory paralysis in a few hours. By then, it’s too late to do anything.

And even if eating poison hemlock does not kill your sheep, it can cause birth defects if eaten at certain times of a eweâ€™s pregnancy.

If you think you have poison hemlock on your property, the best way to deal with it is to contact your local county extension agent. It’s not a plant to be taken lightly. Sven contact with your skin can cause a real reaction.Â

Make sure you get expert advice before you try to eradicate this noxious plant. But getting out to look for poison hemlock right now is one of the best things you can do to keep your sheep healthy and safe.