After settling on a contractor, we moved ahead with the farmhouse’s demolition and repair of the substructure (aka, the floor and rim joists devoured by termites and powder post beetles). Our goals: cut costs and keep renovation in motion. 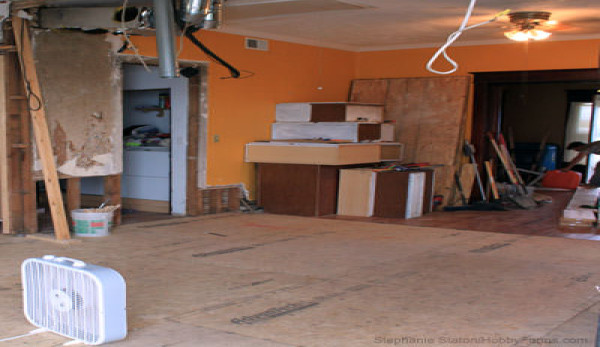 After settling on a contractor, we moved ahead with the farmhouse’s demolition and repair of the substructure (aka, the floor and rim joists devoured by termites and powder post beetles). Our goals: cut costs and keep renovation in motion.

One project couldn’t take place without the other (read more about reinforcing the roof below), so we trudged on while the contractor smoothed out plans with the architect. As we trudged, trudged and trudged some more, it became increasingly apparent that our chosen contractor was a less-than-optimal fit for our farmhouse and its slightly Type-A, ahem, homeowners—well one of them, anyways. After several unanswered attempts to contact him for both information regarding the project and later to fire him, we eventually gave up, swallowed our pride and broke up with him via voicemail. Sad, but true.

The search for another contractor began, and we refocused our frustrations on the house—demo can be rather therapeutic at times.

Once we dug crawlspace and replaced and/or repaired the supports via scabbing (sandwiching a new board onto the old for additional support), we put down a layer of gravel and began closing up the floor. Because we literally pulled out the failing substructure, we had to use temporary support beams to stabilize that area of the roof and prevent it from sagging and potentially collapsing under its own weight and the weight of the walls it was now holding up. It sounds a bit backwards, but I’m a first-hand witness that the roof was doing all the work at this point and, to a degree, before then.

We worked around the supports until the subfloor made it necessary for us to move them, at which point we pulled them down, trimmed them up and put them back in place on top of the finished subfloor. We continued in this manner across the floor, joining the new subfloor to the old section of finished floor that was still in decent condition but lacked a subfloor of its own.

Just take a look at our progress: 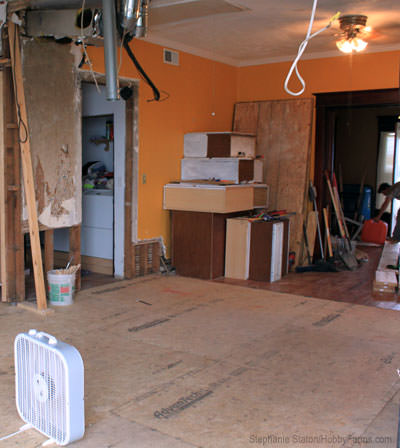 Kicking the balancing act of running across open beams and forever being on the lookout for drop-offs was a welcomed change, even if it was temporary. (Remember, what I said last week about replacing more than half of the floor and rim joists?) Having sound floors in place not only made demolition of the remaining walls and uneven ceiling easier, it made the whole house structure more sound.

We resumed removal of sheetrock (in the “newer” areas of the house) and plaster (in the original areas), old insulation, and the odd items (like T-shirts and socks) used to fill rodent access points. The idea of saving big bucks on labor was a major driver with each roadblock—be it smelly or not.

Stephanie Staton is a freelance writer who burns the midnight oil to meet deadlines between homeschooling her son and chasing her two horse-poop enthusiastic dogs around the farm. She and her family split their time living on the family farm and in an RV that moves with her husband’s work.