Livestock Q&A: What Do New Owners Need To Know About Donkey Health?

As prey animals, donkeys hide pain and discomfort well. Here's what to look for in attributes, movement and demeanor to gauge general donkey health. 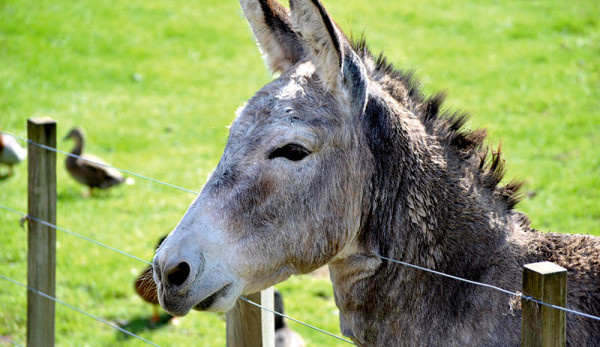 Q. We recently acquired our first donkey and have never kept equines before, and we want to know about donkey health. Can you tell us how to spot any common signs of disease or illness?

A. Because the donkey is a close cousin of the horse, it stands to reason that a lot of horse-focused health information would also be useful to understand donkey health. There are, however, some unique considerations for donkeys. Keep in mind that theyâ€™re considered prey animals, and as such, their signs of illness will often be subtle in order to avoid being singled out by predators.

The animal is too thin if the ribs can be seen without any touching. Malnourished or emaciated animals will have barely enough energy to sustain their daily functions: Their immune system will not function properly, and they will be unable to fight off diseases and parasites. Animals that are too fat will have excess fat over the neck, croup and around the top of the tail. Donkeys tend to put on fat very easily, especially with excess grain feeding, so itâ€™s wise to monitor their body condition on a regular basis and pay close attention to what youâ€™re feeding them.

General demeanor is also a gauge of general donkey health. A normal donkey will be alert to its surroundings. Watch for the animalâ€™s reaction when itâ€™s approached: An animal that seems uninterested in its environment might be depressed. A donkey thatâ€™s comfortable in its surroundings might not lift its head when approached by someone unfamiliar, but look for subtle movements of the ears. Almost every animal will cock an ear in the direction of the approaching person.

A healthy animalâ€™s eyes will be clear, bright and shiny. There shouldnâ€™t be any excessive discharge coming from them, though you may occasionally find clear discharge during fly season, indicating a possible irritation. Adequate control of flies with the use of fly sprays, masks and biological control agents, such as parasitic wasps, will go a long way in alleviating this irritation. Keep in mind that the discharge could also be caused by dry conditions or hay dust, as well.

Make note of the normal ear position in your donkey: Ears should be upright most of the time. They can be laid straight back when expressing dominance or aggression, or when the animal is feeling agitated; however, they should never be droopy or limp. That droopiness is a primary indicator of malaise.

Eating (or not eating) can be a helpful measure of donkey health. Learn about your donkeyâ€™s normal eating habits, too. If an animal with a healthy appetite starts to refuse its feed, it should be examined further. Refusal of food can be caused by a number of things, including fever, abdominal discomfort, teeth problems and infection. Additionally, the condition and quality of the feed can result in a lower intake, so make sure your animal has access to high-quality, contaminant-free food and water.

A healthy donkey will have a shiny, smooth hair coat. A rough hair coat may indicate poor nutrition, as well as internal and external parasites. The skin should feel flexible to the touch and not stiff; dry or stiff skin may indicate that the animal is dehydrated. Â A simple pinch test is useful for determining hydration status. Gently pull the skin on the shoulder; it should return to its normal position in less than two seconds in a well-hydrated animal. In a dehydrated animal, the skin may take longer than two seconds to return to normal or may remain tented.

The gums of the animal should be moist and pink. Pale gums can indicate anemia or circulation problems, while donkeys that are in shock may have blue or purple gums. The latter is an emergency situation and the animal should be seen by a veterinarian as soon as possible. If any swelling appears on either side of the lower cheeks and jaw, itâ€™s possible that your donkey has an abscess in the mucous membranes of the mouth, which should be treated to avoid a weakened immune system and a decrease in body condition due to lack of appetite.

Last but not least, observation of how the animal stands and moves is important in assessing donkey health. Abnormal gait or placement of the feet may indicate pain and/or problems with joints, muscles, hooves or bones.

Just keep a close eye on your donkeyâ€™s daily responses to food, water and other animals, and youâ€™ll be able to keep it healthy and thriving on your farm.

Dianne Hellwig, Ph.D., D.V.M., is an associate professor in the Agriculture and Natural Resources Department of Berea College in Berea, Kentucky.