Donkeys are effective livestock guardian animals against predatory canines, though good training and certain considerations are important for keepers. 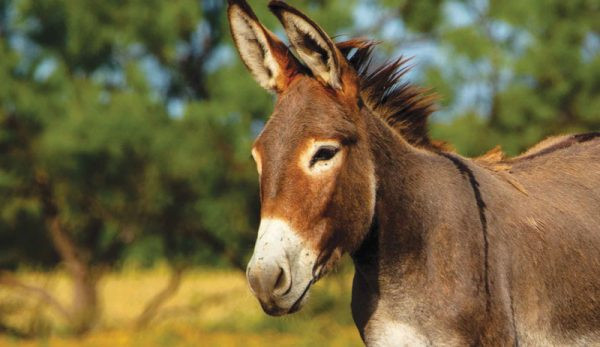 The 120-acre ranch in Red River County, Texas, was an appealing change when Gary Wallace retired after 47 years of teaching and began raising cattle. Unfortunately, the coyotes viewed his calves as a convenient food source. When Wallace contacted his local extension office, the county agent said the federal government could train ranch owners to get certified to use cyanide to kill coyotes and gave him a handbook on deterring predators.

‚ÄúAfter I read the last chapter, it said a simpler way was to use donkeys, llamas or livestock guardian dogs,‚ÄĚ says Wallace, who opted to skip the poison. Rather, in 2005, he bought his first guardian donkey.

The long-eared solution worked better than he could have imagined, and the ranch stopped losing calves to coyotes. He watched in amazement as the donkey would stand guard near the cows when they calved.

Wallace joined the ranks of livestock owners who realize the value of donkeys as guardians.

In southeast Tennessee, Angelia Silvera came to the same conclusion after trying livestock guardian dogs and llamas to protect her sheep and goats. ‚ÄúThe last guardian dogs I had barked so much,‚ÄĚ she says. ‚ÄúEven with good fencing, some would climb over or dig under. They are high-energy dogs and need a lot of space.

She found donkeys less noisy and less challenging to fence than guardian dogs. Since getting her first guardian donkey in 2011, Silvera began rescuing and rehabbing them, eventually becoming a donkey trainer. She‚Äôs taught them to help with farm chores, including hauling compost and pulling a cultivator.

Silvera also hikes with donkeys and has taught them to carry a pack to accompany her on mushroom foraging expeditions in the woods.

On Long Arm W Ranch, Wallace was so impressed with donkeys that he quit the cattle venture altogether and began selling guard donkeys. ‚ÄúDonkeys are powerful, smart and a joy to be around,‚ÄĚ he says.

‚ÄúIt grew to a huge business in my retirement years. At one point, I had as many as 65 guard donkeys for sale and had people coming from all over the U.S.”

Wallace maintained the business until a heart attack in 2020 limited his ranching abilities. (Although Wallace sold the operation, Long Arm W Ranch is still in business.)

Donkeys have an inherent caution and dislike of canines. Unlike horses, which instinctively flee from any perceived danger, donkeys tend to stand their ground and think through the situation. Donkeys only run if they deem retreat prudent.¬†

When a canine enters their territory, the donkey often brays loudly and approaches the threat. Some donkeys will charge, which is usually enough to make the predator retreat. When attacking, donkeys use hooves and teeth to get their point across. They will strike out with their front feet, kick with their hind feet and bite.

Although witnesses have seen donkeys kill dogs and coyotes, in most situations, the donkey‚Äôs presence and assertive stance is enough to send canine predators looking for easier prey. Donkeys can‚Äôt be expected to fend off apex predators, such as mountain lions, bears or wolves.

‚ÄúThey are especially good during calving season because they will stand guard when cows go off to calve.‚ÄĚ¬† Headquartered in San Angelo, Texas, PVDR has satellite facilities in several states. Since its founding in 2000, the 501(c)(3) nonprofit organization has rescued more than 13,000 donkeys.¬†

‚ÄúWe manage 5 1‚ĀĄ2 million acres of wild donkey habitat and are working with the National Park Service in federal parks that have a zero-donkey policy,‚ÄĚ Meyers says.¬†

Whenever possible, PVDR‚Äôs goal is to gentle and adopt out donkeys rescued or removed from the wild. PVDR had its own guardian donkey-training program, which it ended in 2019.

‚ÄúWe felt it sent the wrong message. Our adoption contract calls for equine companionship and requires people to adopt two donkeys unless they already have another equine. We also found that one out of 10 donkeys ended up killing the animals they were supposed to protect,‚ÄĚ Meyers says, noting that not every donkey is cut out to be a guardian.

Some believe that donkeys only protect livestock because they are guarding their territory‚ÄĒnot the animals themselves. Meyers has seen otherwise.

‚ÄúI had a donkey that killed two dogs that attacked me when I was out walking because she was guarding me. They‚Äôre very protective of each other and whatever they‚Äôre bonded to,‚ÄĚ he says.

Uninformed buyers make several mistakes when it comes to guardian donkeys, including:

‚ÄúJacks are often the cheapest donkeys, and inexperienced people often end up buying one for a guardian,‚ÄĚ Silvera says.¬†

‚ÄúMales make terrible guardian donkeys,‚ÄĚ Meyers says. ‚ÄúWe get calls all the time from people who got a male (jack or gelding) guardian and regret it, because they turned on the animals they were supposed to protect.‚ÄĚ

For best success with a guardian donkey, the go-to choice is a single jenny (female donkey).¬†

‚ÄúIf you‚Äôre getting a guardian donkey, you want her to bond with the herd, so you just want one,‚ÄĚ Meyers says. ‚ÄúDon‚Äôt get a mother donkey and her foal and expect them to be guardians because they will bond together.‚ÄĚ ¬†

As darling as miniature or Mediterranean donkeys are, they aren‚Äôt good guardian candidates. These small donkeys stand about 32 to 34 inches tall and weigh between 200 and 375 pounds. They can‚Äôt be expected to guard against predators and may end up being prey themselves.

When looking for a guardian, you want a standard donkey, which range in height from about 12 hands (48 inches at the withers) to 13 hands (52 inches) and weigh around 400 to 500 pounds.

At the very least, the donkey should be halter broke and stand well enough to have her hooves trimmed, and for the occasional veterinarian visit.

‚ÄúMany people who get a guard donkey don‚Äôt have a trailer. The farmer just drops it off, but that donkey may not even know how to lead,‚ÄĚ Silvera says.¬†

You may be told the donkey is gentle. As Silvera points out, though, ‚Äúgentle and friendly‚ÄĚ doesn‚Äôt mean trained.

Before you take on a guardian donkey, line up both a veterinarian and farrier experienced with donkeys.

‚ÄúDonkeys need their hooves trimmed, their teeth done and vaccinations just like a horse,‚ÄĚ Meyers says. ‚ÄúMost farriers won‚Äôt touch a donkey unless it‚Äôs trained to stand for its hooves to be done. Bad hooves are one of the most common things we see in donkeys.‚ÄĚ

‚ÄúHoof care is important,‚ÄĚ Silvera says. ‚ÄúIf donkeys have overgrown or poor feet, they can‚Äôt be good guardians. If your donkey can‚Äôt run, it can‚Äôt guard!‚ÄĚ

ely turn them into the field with the livestock they‚Äôre expected to guard. As excited as you may be to introduce your new guardian to the herd, don‚Äôt rush the process. The donkey has likely just been trailered to your place and everything is new.

‚ÄúYou need to give the donkey time to get over the stress of travel,‚ÄĚ Meyers says. Put the donkey in a fenced enclosure by herself so she can decompress for a few days and settle into her new environment.

The next step is to put the donkey in an area with a common fence between her and the animals you want her to protect, whether that be cattle, sheep or goats. Having a fence between them is important at this stage so you can gauge the donkey‚Äôs response for two or three days.

If there are any negative reactions on the part of the donkey, such as tail swishing, stomping feet or aggression, keep them in adjacent enclosures until you don‚Äôt see any more of this behavior, Silvera says.

‚ÄúDonkeys are social creatures, so they will usually end up standing at the fence next to the herd/flock,‚ÄĚ Meyers says. ‚ÄúIf all goes well over a couple days, then put them together.‚ÄĚ

Ideally, the donkey should stick around the livestock when turned out together. If she wants nothing to do with them, she‚Äôs not likely to make it as a guardian.

Read more: Not sure which livestock guardian animal is right for your farm? Here are some tips.

Be aware that sheep and goat feed may contain anticoccidial agents. If the label notes ingredients such as monensin or lasalocid, the feed can be lethal for donkeys.

‚ÄúIt can be a problem if the donkey is eating the food of the animals they‚Äôre guarding. You have to separate them at feeding time,‚ÄĚ Silvera says.¬†

Your veterinarian can advise on vaccinations needed in your area, as well as deworming and dental care. Keep in mind that donkeys are desert animals designed to live on low-quality forage. Although donkeys need hay during the winter, they don‚Äôt need grain or rich, high-protein hay‚ÄĒno alfalfa!

‚ÄúYou also don‚Äôt want donkeys on lush pasture 24/7,‚ÄĚ Silvera says. ‚ÄúIf that‚Äôs your situation, donkeys are not recommended. They will get obese and can founder (a painful, life-threatening lameness). Llamas are better guardians if you have rich pastures.‚ÄĚ¬†

Unlike horses, donkeys don‚Äôt develop an undercoat that protects them in cold, wet weather. So they need a shelter to get out of the rain.

With good care, donkeys can live into their 30s‚ÄĒor older‚ÄĒgracing you with their long-eared presence for many years.

The ideal scenario is to buy a donkey that has already been proven to guard. Word of mouth, websites and bulletin boards at your local feed-supply stores are some of the best resources. Donkey-keeper Angelia Silvera recommends EquineNow.com.

Once you‚Äôve found a potential match, ask the following questions.¬†

Cynthia McFarland is a full-time freelance writer and the author of nine nonfiction books whose work has earned regional and national awards. She lives on a small farm outside Ocala, Florida, and has shared life with numerous horses and one amazing donkey.