Hedgehog mushrooms are easy to learn for new foragers and have a sweet, slightly nutty taste. So don't be afraid—they're worth seeking out. 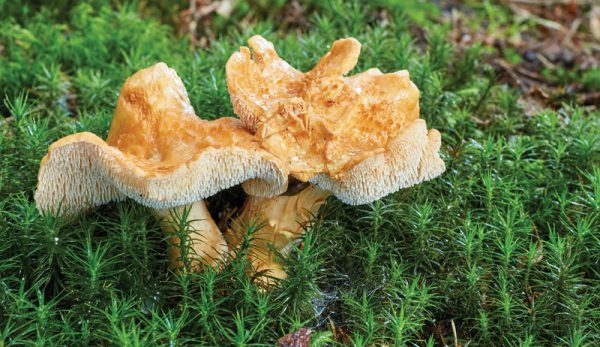 Two guests at our dinner party—a Brit and a Yank—had declarations to make as they sat down. “I have an irrational fear of mushrooms,” said one. “Me too,” said the other.

One of my tricks for converting mycophobes is to serve several types of mushrooms in separate bowls. But each one is cooked the same way with butter, garlic and parsley and served as a mini buffet. Few people can resist the temptation to compare and contrast bite-size pieces of food between courses.

My wife and I were volunteering on a small organic farm in Italy’s southern Tuscany region. Luisa, the farmer, didn’t believe in letting work get in the way of having a good time.

While drinking bottles of local wine over dinner and watching the rest of us—two more Yanks, a Spaniard and three Italians—roaring with pleasure while forking up glistening bits of the mushrooms I’d prepared, our Anglophonic mycophobes began racing to eat their share. At the end of the meal, the Brit asked, “Are there any more of the hedgehogs left?”

The hedgehog in question was one of the half-dozen varieties of edible mushrooms we’d harvested the day before with the help of Severino, the local one-eyed forager.

Hedgehogs (Hydnum repandum) have a sweet, slightly nutty taste. Their texture is denser than most mushrooms. Noted forager and chef Alan Bergo has plenty of recipes for this delicious mushroom on his website.

Read more: Get inspired to engage with wild mushrooms!

Hedgehog mushrooms are also easy for novices to learn. There are no poisonous look-alikes for hedgehogs. (You might want to take a nibble to make sure you’re not harvesting a similar species with a slightly bitter taste and darker cap and spines, though.)

If you’re in doubt, edible hedgehog mushrooms have a white spore color. But that’s not really considered necessary for field identification.

Hedgehog mushrooms have a buff-colored cap that has a similar color range to chanterelles, to which they’re related. The cap will be the size of your palm or smaller. It will have a smooth or sometimes suede-like top surface.

Its nearly white stalk—inside and out—will be no longer or wider than your thumb. The underside of the cap will also be white. The mushroom will lightly stain orange or brown where touched.

The clincher is that the underside will be completely covered by tiny teeth that are paler in color than the top of the cap and about 1⁄4 inch long. Just the right length for a fairy to use it as a hairbrush.

You can find hedgehogs throughout North America. Foragers in the Rockies may find them in fall. In areas with mild seasons, such as the West Coast, they run through fall and winter. East of the Rockies, they start fruiting in late summer and can keep showing up into early winter.

Even in the frosty Northeast, foragers may find them in December.

Read more: Make your own DIY chantrelle picker with these easy instructions.

They belong to a group of mushrooms that I call “the marrying kind,” as they form collaborative relationships with the roots of conifers and deciduous trees. They might be found in almost any kind of forest.

Severino had helped us find ours in a forest of mature beech trees with moss-covered boulders as big as a house. He had been foraging there to put food on his family’s table since boyhood. In his hard-to-understand Tuscan dialect, he pointed out places where he had camped in some of the hollows in the boulders while making mushroom soup over a fire.

When we told him that some people from English-speaking countries had a fear of mushrooms, he found the concept laughable.

If you do any international travel, you’ll find the same odd phenomena. Only people in English-speaking countries—U.S., Canada, U.K., New Zealand, Australia—harbor fears about mushrooms.

I’ll shed more light on that in a future column.

This article originally appeared in the January/February 2021 issue of Hobby Farms magazine.