Don’t Give Up on Your Failed Guard Dog

It is possible to teach a failed LGD new tricks, turning it into a useful farmhand or companion. 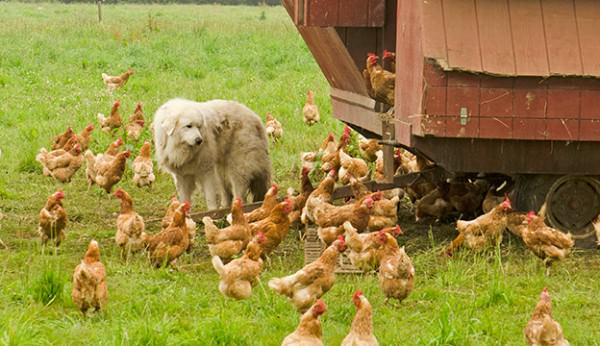 Jackie Church refused to give up on Apollo. The son of Apollo’s former owner would tease the 6-year-old Maremma, making it act out toward men. Instead of letting the owners surrender Apollo to the shelter, where the dog would face euthanasia for aggression, Church took the livestock guardian dog in and set to work rehabilitating it.

She spent months working with Apollo. She started by spending time around the dog, doing chores in its pasture or reading a book near its shelter, to help it get accustomed to being around new people.

“He was great with stock,” Church recalls. “His issue was people.”

After a few weeks of watching Church sit in the pasture, Apollo worked up the courage to approach her, allowing Church to pet the dog for the first time. A few months later, Apollo was eager to be scratched behind the ears and explore the pasture at Church’s side.

Once Apollo felt comfortable around Church, she started teaching the dog to trust men. Her husband, Tom, accompanied her to the pasture to feed Apollo and help with chores. After six months of rehabilitation, Apollo was adopted by a farmer who put the dog back to work guarding stock, while offering it plenty of affection and attention.

“He started to learn to trust us and blossomed into this incredible dog that loved being around people,” Church says.

Working with Apollo led Church down an unexpected path, introducing her to the need for an experienced trainer to rehabilitate livestock-guardian dogs. Church, who breeds Maremmas and raises sheep, goats and chickens on Windance Farms in upstate New York, started working with rescue groups and frustrated farmers who believed their “failed” livestock-guardian dogs were too damaged to succeed on the farm.

Livestock-guardian dogs, aka LGDs, include breeds, such as Great Pyrenees, Anatolian Shepherds, Akbash and Maremmas, that are bred to work on farms, protecting goats, sheep, chickens and other livestock from predators. A well-socialized, well-trained LGD is an asset to a small-scale farm, where strong fences and shelters might not be sufficient to keep livestock safe from predation.

While most LGDs are put into the pastures as puppies and easily settle into their roles as guardians, some LGDs struggle to adapt to farm life. Issues, such as poor socialization, inexperienced owners and lack of interaction with successful guardian dogs, can lead the dogs to roughhouse with livestock, attack the animals they’re supposed to protect or interact dangerously with their owners. Frustrated with their failed dogs, farmers often dump the dogs in rural areas to fend for themselves or surrender them to shelters where their fate is grim.

There’s a perception that a working dog that escaped its pasture to roam, chased the stock or killed its charges isn’t cut out for farm life, according to Sandra Moore, of Haven Acres Farm near Austin, Texas.

“I see ads all the time for litters of puppies from ‘working parents,’ and farmers buy these dogs and expect them to know what to do,” Moore says. “Guess what? The puppies aren’t working. Just because a dog comes from a successful working pair doesn’t mean it’ll know what to do.”

Moore has 15 LGDs patrolling the pastures of goats, chickens, ducks and peafowl on her farm. While her guardian dogs are well-socialized, bonded to their charges and learn from each other, Moore knows that not all LGDs are as fortunate. In 2007, she started working with rescue groups and farmers to rehabilitate failed guardian dogs.

A few months ago, Moore saw an ad on Craigslist from a dog owner who wanted to sell her 4-month-old Great Pyrenees. She purchased the pup from a breeder to protect a flock of backyard chickens. Instead of lounging in the grass and watching for predators, the 8-week-old ball of fluff tried to befriend the chickens. Worried that the dog would kill the chickens, the urban farmer decided to sell it online and use the cash to trade up to a trained LGD. Moore purchased the dog, named it Sugar Bear and set to work training it as an LGD for her farm.

“Just because the breed has guardian instincts doesn’t mean he knows what to do,” Moore explains. “You can’t just put puppies out in a pasture on their own and expect them to work. He could have become a ruined dog.”

To the credit of the original owner, the dog was removed from the chicken run before it killed any of its charges.

“When [an LGD] isn’t doing its job … the problem needs to be addressed before the dog harms the livestock it’s supposed to protect,” says Bonnie Beaver, DVM, a veterinary behaviorist and professor at Texas A&M University College of Veterinary Medicine and Biomedical Sciences.

Most of the calls Moore receives about rehabilitating or rehoming LGDs are from farmers who bought puppies, assumed the dogs knew what to do, and suffered stock losses or dealt with bad behavior on the farm.

“When this happens, it’s the dogs that suffer,” she says.

Educating farmers is one of the biggest challenges Moore faces in her work with LGDs. She believes that when a guardian dog fails, it’s often the farmer who should be blamed, not the dog.

After a few weeks at Haven Acres Farm, Sugar Bear learned how to be a successful guardian dog. Moore established a feeding routine, placed the dog in a secure paddock where it observed farm chores, introduced it to her successful guardian dogs to learn appropriate behaviors, and started letting it to interact with chickens and goats so she could monitor its reactions, allowing Sugar Bear to get the hang of what it takes to be a contributing member of the farm.

According to Moore, LGDs are resilient dogs with strong instincts, and rehabilitation is possible. Guardian dogs that failed to thrive in their previous environments can be retrained to work in the fields or retired from life on the farm and placed with families as companion dogs. The process takes time, effort and know-how, but the results are often astounding.

Rehabilitating an LGD requires setting clear, concise and consistent expectations, according to Church. The dog should understand what is expected of it and be praised for responding to commands. It’s also essential to take cues from the dog.

“When you take in a rescue, you need to let the dog set the pace,” Church says.

After taking in a Maremma that was killing chickens, Church started assessing its knowledge of commands. It didn’t take long for her to realize that the dog didn’t know its own name because no one ever spoke to it. Before she could teach the dog commands and expect it to respond, she needed to teach it to respond to its name.

During rehabilitation, the LGD needs to be part of the action on the farm, hearing tractors moving across a pasture, the sound of a cell phone ringing or music playing during morning chores; watching cats race through the barn; or farmhands harvesting crops and tending to stock. “The more things you can expose them to, the less likely they are to see them as a threat,” Church says.

Church received a call about a Great Pyrenees that attacked an alpaca it was supposed to protect. The dog couldn’t be trusted with alpacas but repeated observations with other stock showed Church it was comfortable and well-mannered around sheep, so the dog was rehabilitated to become a successful sheep guardian on a different farm.

“Just because a dog failed at one thing doesn’t mean it’s a failure,” she explains.

Beaver, former president of the American Veterinary Medical Association, believes that puppies need to be socialized with the animals they’re supposed to be guarding and engaged in regular interactions with people.

Socializing an LGD with people is an important part of the rehabilitation process. In contrast with the old-school methods of raising livestock guardians with minimal interaction, showing LGDs affection is encouraged.

“There used to be a fear that showing a dog affection would cause it to bond with the farmer and not the stock,” Moore explains. “It’s not true. There is nothing wrong with going into the pasture to feed the dogs and giving them a pat on the head and a little love. It makes them even more loyal and willing to be there when you need them.”

In fact, not bonding with the dog could backfire. Dogs that have limited interaction with people can turn semi-feral, according to Moore.

In 2010, Moore was contacted by a farmer who was selling her herd of goats and no longer wanted her LGD. Rescues refused to take Gus because the dog barked and lunged at anyone who got too close to its pasture. Even the farmer was afraid of the 4-year-old Great Pyrenees mix; she tossed food over the fence and carried a stick to enter the pasture.

“The poor dog hadn’t gotten any attention in his whole life,” she says.

Moore visited the farm five times over a two-month period to assess Gus and gain the dog’s trust. Confident that Gus was untrained but not aggressive, she brought the dog home and integrated it into farm life. Although slow to warm up to new people, the dog has grown to trust Moore and other farm regulars and maintains its role as a successful goat guardian.

In addition to training and rehabilitating LGDs using clear, concise and consistent commands, Church relies on help from the other guardian dogs on her farm.

“It’s ideal to work [dogs going through rehabilitation] with existing dogs that are trained,” she says. “The trained dogs become mentors, teaching the [failed] dogs how to act.”

Farmers who put LGD puppies in a pasture with older guardian dogs need to make sure that the older dogs are well-trained because the puppies will observe and mimic their behaviors. For LGDs undergoing rehabilitation, mentor dogs instill respect and manners, Moore says.

She believes that her Australian Cattle Dog, Oliver, helped a rescued Great Pyrenees settle into life on the farm. Kirby was 60 pounds underweight when Moore pulled the dog from a shelter in Austin. It was so fearful and submissive that Moore believes it was abused. Instead of rushing to turn the rescued dog into a working guardian dog, Moore set Kirby up in a private paddock and put out food and water but didn’t attempt to touch or teach the dog commands. After Kirby regained some weight and improved physically, Moore introduced it to Oliver.

“Oliver had this way of interacting with Kirby that assured him, ‘This is a good place. You’ll like it here,’” she says. “[Kirby] started to come out of his shell.”

Moore started showing Oliver affection in front of Kirby, and the shy dog eventually began seeking out her attention. While Kirby didn’t show promise as an LGD, the dog became a treasured companion for Moore and Oliver.

“Most of the time, the dogs are trying to tell us what they need and we’re not listening,” she says. “It’s a thing of beauty to watch these dogs flourish and become valuable members of the farm.”

Read more about farm dogs in these HobbyFarms.com articles:

This article originally appeared in the July/August 2013 issue of Hobby Farms.