Never Keep Livestock as Pets … Except When You Do

Getting too attached to livestock is not in a farm's financial interest, but I made an exception for a boar named George Clooney. 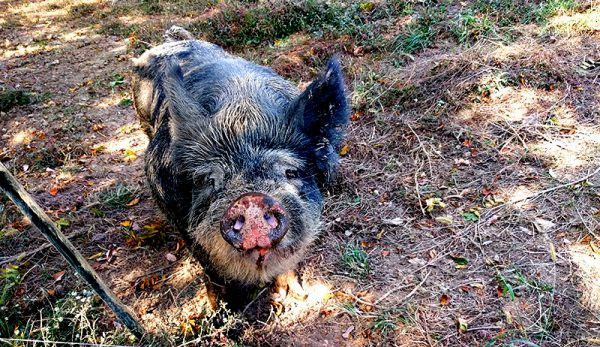 When raising livestock for meat, farmers must follow one hard and fast rule: You canâ€™t care about the animals you care for. Which isnâ€™t to say you canâ€™t respect and honor the creatures youâ€™re tasked with raising. I believe you should, in fact, play and talk with your feeder hogs to make their life as good as possible. But you canâ€™t love them, or else youâ€™ll depart the processor in tears every time.

Itâ€™s simple pragmatism, but to the outsider looking in, this attitude can seem callous, especially when coupled with the livestock farmerâ€™s other rule against keeping animals who donâ€™t pull their weight. When budgets get tightâ€”and farm budgets are, by nature, very tightâ€”it doesnâ€™t make dollars and sense to keep an old animal around just because.

Which is exactly what weâ€™re doing with George Clooney, the 700-plus-pound Berkshire boar.

In the early days of our farm, my family and I, influenced by previous experiences with a friendâ€™s organic farm and the unexpected gifting of two Berkshire feeder pigs, found that we quite enjoyed raising hogs as livestock. After the first two filled our freezers, we found a breeder of high-quality heritage pigs and bought a few sequential litters. Then, wanting to keep pig production on the farm, decided we needed a pair of breeding hogs ourselves. As luck would have it, a hobby farmer down the road had just posted a breeding pair of purebred Berkshires on Craigslist, so off we went to Paris, Kentucky, to fetch them.

We renamed our porcine power couple George Clooney and Hen Wen (our kids were reading The Black Cauldron), and we were well pleased when the sow gave birth to a litter of 12 a few months later. She was a good breeder with a bad temperament. Yet when her litters got smaller and, because of the presence of a second womb, unpredictable, we found a younger boar and put him with one of Hen Wenâ€™s gilts. We wanted to introduce some new genetics, and those two became the new pig power couple of Goldfinch Farm.

Hen Wen produced a few more small litters, but she grew disinterested in raising her piglets and began crushing them carelessly. She also started nipping at us and trying to escape, so when she finally made a break for the hills, we loaded Hen Wen into the trailer and took her to the processor like other of our livestock pigs.

That left us with George, who, after some hand wringing and fretting, we decided to make a pet. An expensive pet, for sureâ€”a full-grown boar eats about seven pounds of feed a dayâ€”but a good one. George works to make us laugh, walking alongside the fence line as we do our chores, snorting through his intimidating tusks in response to our every comment and question aimed at him. (I told you we talk to our pigs.)

The rest of the time, he wanders his pasture, chewing on grass and sleeping in his fenced-off piece of woods. He does absolutely nothing for the farmâ€™s bottom line and, despite telling ourselves that we canâ€™t sell his meat because of the risk of boar taint (a gamey odor present in some boar meat that, realistically, isnâ€™t a problem in seasoned sausage), our decision to keep him as long as we keep the farm is based largely, if not solely, on the fact that he makes us smile.

And I believe thatâ€™s OK. It breaks the rules, but farming is hard, and, on days when the fox is stealing layers, piglets are breaking out and fragile broilers have succumbed to the elements, itâ€™s nice to know where to go for an easy smile: front pasture, along the fence line, where that big, goofy face is waiting to chat.