Resulting in painful blisters, dark spots and even scarring, the sap from certain plant species can trigger 'phytophotodermatitis.' 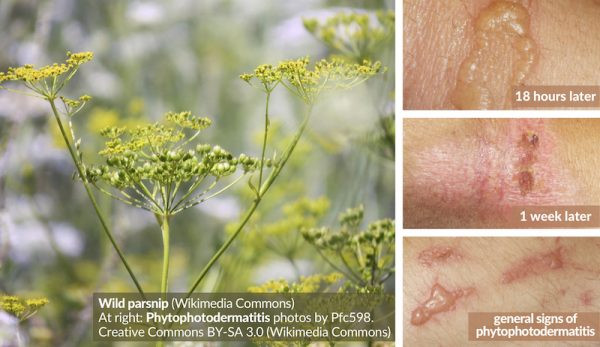 At first I had no idea what hit me. Red splotches appeared on the backs of my hands and along my forearms. Then large, painful blisters formed. That week, I’d been harvesting parsley for my boss.

She was an organic farmer with a science background. One look, and she instantly knew what it was. â€śThat’s a phytophoto reaction,â€ť she’d said.

Initially, I’d assumed poison ivy or maybe some unseen blister beetle had caused my skin woes. Actually, it was something less common, but potentially quite seriousâ€”phytophotodermatitis.

And whether you’re doing some fall weeding or you’re harvesting dill, fennel, carrots or some of their relatives, you might want to take some precautions to avoid this skin reaction yourself.

Read more: Watch out for the blister beetle!

In the case of both of those weeds, the active ingredient is called psoralen. â€śPsoralen is a linear furanocoumarin,â€ť explains Joe Boggs, an assistant professor at Ohio State University (OSU) Extension and OSU entomology. â€śIt’s in that chemical group.â€ť

So, as you chop down or hand-pull that wild parsnip or giant hogweed? Let’s say you get some of the sap on your skin. â€śThe psoralen is not an oil,â€ť Boggs notes. â€śIt’s apparently water soluble, so it goes through your skin quickly. And the very first thing that the psoralen does is to actually start wrecking the DNA of epidermal cells in our skin.â€ť

Exposure to furanocoumarins by themselves isn’t enough to trigger phytophotodermatitis. But add UV light to the mix?

â€śTo our eye, we probably wouldn’t notice anything right away, but it’s a cascading effect,â€ť he says. â€śThe first thing is [the psoralen] starts wrecking that DNA which means, obviously, the epidermal cells can’t replace themselves. Then [your skin] needs to be exposed to UV light, and that can take time.â€ť

In the absence of UV light, the healthy epidermal cells in your skin would eventually have the chance to replace the psoralen-damaged ones, and healing would occur. But when these damaged skin cells get a dose of sunlight, the affected skin reddens, and blisters can form.

Eventually, the blisters may be replaced with scabs, discoloration and even scarring.

Which plants contain defensive chemicalsâ€”and even how much a particular plant may containâ€”can vary to a great degree. Some factors that can influence this include plant location, variations in climate, and insect activity.

Consider, for example, wild parsnips versus their cultivated counterparts. Just how is it that we can harvestâ€”and eatâ€”cultivated parsnips without experiencing serious phytophoto reactions?

â€śIt turns out that, if you take wild parsnips and you do not expose them to any type of herbivores, the wild parsnip will slowly start losing its ability to defend itself,â€ť Boggs says. â€śThe psoralen that’s responsible for phytophotodermatitis is a defense chemical that the wild parsnip produces in response to things eating it.

“But if something doesn’t eat it, eventually the plant stops putting energy into producing that chemical. That’s how we end up with cultivated parsnipsâ€”they don’t need to have a high level of that chemical.

“And there are probably other genes involved in that, too.â€ť

Read more: Consider these things when buying your next pair of garden gloves.

When combined with UV exposure, the sap from lemons, limes and grapefruit can also result in phytophotodermatitis. â€śBefore Lyme disease became L-Y-M-E disease, we had L-I-M-E disease,â€ť Boggs says. â€śI’ve also heard some people refer to it as ‘margarita dermatitis.’ If you have bartenders who are squeezing limes and getting the juice on their skin and then they’re exposed to UV light, they can have a [skin] reaction.â€ť

â€śSo, phytophotodermatitis isn’t just relegated to wild parsnip,â€ť he says. Both cultivated and wild chervil, cultivated and wild angelica, rue, lovage, burning bush and Queen Anne’s lace are a few of the other furanocoumarin-containing plants which can cause trouble.

After my own run-in with phytophotodermatitis, I didn’t quit picking the parsley. But I did put some new precautions in place. On parsley-harvesting days, I wore long pants, long sleeves and gloves. I also got to the farm well before sunrise. And I washed up with soap and water as quickly as I could after the harvest was done.

Keeping furanocoumarins off of your skin is job one. To that end, cover up well. (You might even want to wear eye protection.)

Finally, when you work with furanocoumarin-containing plantsâ€”particularly wild parsnip and giant hogweedâ€”avoid cutting or weed-whacking. Such methods will simply increase your risk of exposure to their potent sap.

Instead, carefully dig these up by their roots or apply herbicide.