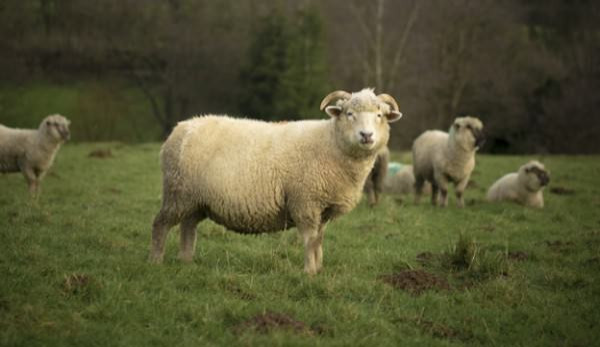 Use: Dorsets are dual-purpose wool and meat sheep. Dorset fleece is white, strong, and free of dark fiber. Averaging a five to nine pound clip with a two to four inch staple, it measures in the 26 to 32 micron range. Because they’re attentive, extremely milky dams, Dorset ewes produce fast-growing, meaty lambs; twins are the norm.

History: The British Dorset’s origin is uncertain but it’s believed to be descended from a long-tailed, primitive breed, the Portland, whose tan-faced, horned ancestors ranged throughout southwest England prior to the Roman Conquest. Says M.L. Ryder, writing in The History of Sheep Breeds in Britain (1964), “The unimproved Portland breed, now almost extinct, is probably a good example of what the South-West Horned type was like before it evolved into such breeds as the Wiltshire Horn and Dorset Horn. It is of interest that the long breeding season for which the Dorset Horn is now famed was noted by Edward Lisle as early as 1757, in the Wiltshire breed. The only other breed that is so fertile is the Merino, and this has led some to suggest Merino blood in the modern Dorset.” The British Dorset Horn Sheep Breeders Association was founded in 1891 but Horned Dorsets came to America long before that. The Hudson’s Bay Trading Company brought them to Oregon prior to 1860 and the first to reach our East Coast arrived in 1885. Using Horned Dorset breeding stock, North Carolina State College in Raleigh, North Carolina, pioneered polled (hornless) Dorsets in the early 1950’s, creating a second and now more popular Dorset breed.

Conformation: Dorsets, both horned and polled varieties, have white faces with pink skin. They are solidly build, at least as long as they are tall, with broad backs and medium-length legs. Horned Dorset ewes have small, sturdy horns that curve forward and downward close to the jaw; Horned Dorset rams have magnificent, spiral-curved horns. Dorset ewes weigh 150 to 225 pounds and stand 34 inches tall or less; mature rams tip the scale at 225 to 350 pounds and shouldn’t exceed 37 inches tall at the shoulder.

Special Considerations/Notes: The Dorset’s most remarkable trait is its ability to breed out of season, a quality not seen in most wooled breeds; properly managed Dorset ewes produce three lamb crops in just two years. In addition, Dorsets adapt extremely well to both grass-based and feedlot situations. Polled Dorsets are the most popular white-faced breed in North America, while the much less-common Dorset Horn remains in the Watch category (“Fewer than 2,500 annual registrations in the United States and estimated global population less than 10,000”) of the American Rare Breeds Conservancy’s Conservation Priority Watchlist.