When In Drought: How To Help Your Crops During Dry Conditions

Doing rain dances won’t help your farm when it's suffering the effects of a drought, but planting crops that require less water will. 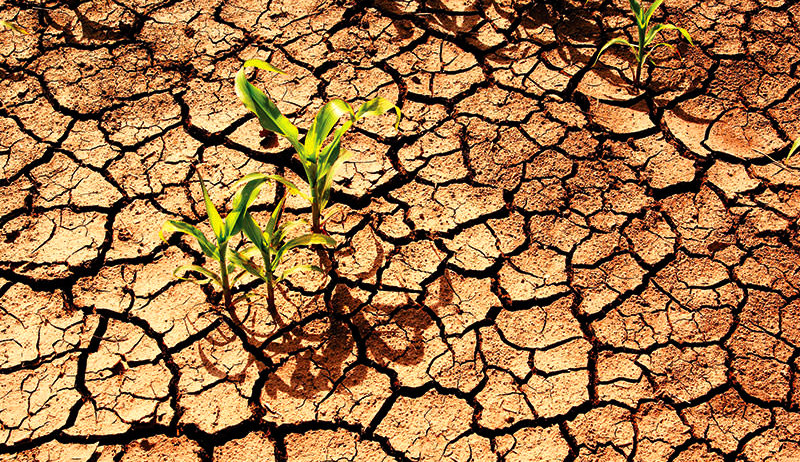 Water plays an essential role in farming. Without adequate water, your crop yields might be low, plants may wither and dry up, and in worst-case scenarios, the entire crop can die. Plants need water throughout their life cycle, so lack of rainfall—especially in drought conditions—poses a serious threat to a farmer’s livelihood.

Several areas around the country have experienced record drought conditions for several years in a row. This has many farmers, who just want to keep farming, turning to less-thirsty crops to help ensure their farms stay productive and profitable.


What Constitutes A Drought?

Mention the word drought and many people envision the Dust Bowl of the 1930s, but conditions don’t have to be that severe to be classified as drought conditions—or to have a negative impact on agriculture. The U.S. Geological Society defines a drought as a period of drier-than-normal conditions that results in water-related problems. However, the term drought has different meanings to different people, especially depending on their area’s climate and the effects of water deficiency.

The USGS classifies three different types of droughts: meteorological (lack of precipitation), agricultural (lack of soil moisture) and hydrologic (reduced groundwater levels). Droughts are one of the most expensive natural disasters and can have lasting effects on the agricultural industry as a whole.

Also, choose faster-maturing crops: Due to the time reduction between planting and harvesting, short-season varieties use less water than their late-blooming counterparts: For example, Early Bush red cherry tomatoes not only perform well under hotter conditions, they also produce seven to 10 days earlier than other varieties. With a little research, you’ll discover a wide range of food crop choices with minimized water needs from the more obscure desert crops to everyday varieties of vegetables, fruits, grains and herbs.

Sonoma County Master Gardener Electra de Peyster cautions gardeners to avoid crops that need consistent moisture unless a particular variety has been bred to need less water. (Also see our tips for gardening during droughts.) She says tomatoes are great candidates for dry farming, which is a practice of training plants to access retained water in the subsurface, instead of through irrigation. This also makes many tomato varieties excellent choices during drought conditions.

“You can water tomatoes regularly until the fruit is set,” Peyster says. “Then, pull back on watering, so by harvest time, you’ve stopped all watering.”

Besides conserving water, another advantage to this method is that the resulting fruit will have a more intense tomato flavor. Tomatoes with a watered-down flavor are a result of excess soil moisture.

Early Girl tomatoes are famous for dry-farming, but Brandywine, Black Krim and most cherry tomato varieties also produce well in dry-farming and drought conditions. Other varieties, such as Cherokee Purple and Beefsteak, may also perform well during drought, but they might require irrigation during dry periods. However, once the vines are established, these varieties only need watering once every week or two, instead of every day or two like other varieties. While limiting water causes the vines to eventually shrivel, the fruit still ripens with superior flavor. Furthermore, you can often train other tomato varieties, and other crops, to grow with less water.

“If you save seeds from healthy tomato plants—or any crop that was still healthy at harvest time and produced well—that grew with less than the preferred amount of water, and you replant those seeds and select healthy good performers for at least three years, the seeds adapt to their growing conditions,” Peyster says. “By the end of that time, you could have a more drought-tolerant variety.”

Besides tomatoes, almost all bean varieties and the majority of grapes are suited to dry conditions, as well as some melons, squash, cucumbers, peppers, okra, corn, herbs and grains. Cool-season crops generally aren’t drought-tolerant, because most brassicas, lettuce and other greens, onions, carrots and other root crops perform better with regular watering. You can learn more about individual plant moisture needs from seed providers through their print and online catalogs.

Besides choosing crops that naturally require less water, you’ll find a slew of planting tips that help you use less water throughout the growing season. This includes appropriate mulching, composting and drip-irrigation systems.

“When growing with less than the optimal water, make sure you add compost to the soil, so your crops can perform as well as they can with the limited moisture,” Peyster says. “Organic matter helps open up soil allowing roots to go deeper and find more water at lower depths.” (See our other tips for nourishing soil during droughts.)

Mulching is even more important, because it helps conserve moisture, while keeping the soil cool and reducing weeds that compete for water.

“Using mulch is the best way to keep moisture in the soil,” Peyster says. “Mulch is critical for keeping whatever water you have in the soil. You can use grass clippings that have no pesticide or herbicide residue, which is very important when growing an organic or sustainable food crop. Other materials for mulching are straw, cardboard, wood chips, leaves and shredded newspaper with environmentally safe inks, or combine materials, such as cardboard and straw. When using mulch to keep water in the soil, it’s critical you add at least 4 inches on top of the soil.”

Concerning irrigation, drip systems provide the most efficient application of limited water by applying the water directly to the root zone of plants with low-pressure applicators placed either at or below the soil’s surface. This conserves water, which is extremely important in areas with strict water restrictions. Peyster agrees that drip irrigation is the way to go and added that for commercial farmers who plant in rows, drip tape works well, but the plastic breaks down over time.

Whether you’re a small-scale hobby farmer located in an area already experiencing drought or you’re worried your area might soon join the ranks, you may be forced to switch to crops that can thrive with limited water. For the best results, always choose drought-tolerant varieties already adapted to your region’s climate.

The University of California’s Division of Agriculture and Natural Resource compiled a list of drought-tolerant plants for its Master Gardener Program. Some of their suggested crops include the following.

You can view the whole list here. For additional drought-tolerant crop possibilities, talk to seed companies or nurseries that specialize in plants suitable for extremely dry climates.

This story first appeared in the May/June 2017 issue of Hobby Farms.