Get to Know the Droughtmaster Cattle Breed 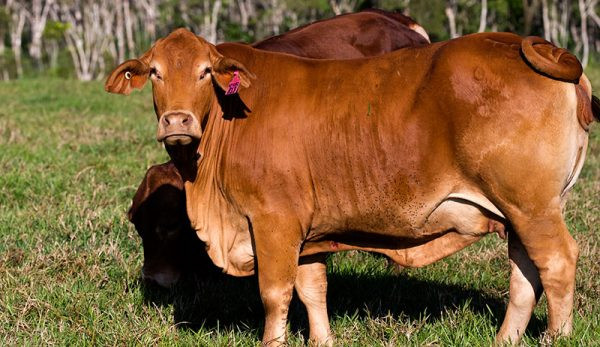 Farming requires, above all else, adaptability. Below average temperatures in the dead of winter? Looks like youâ€™ll be breaking up frozen waterers this season instead of whatever else you’d planned. Dry, hot summer? It might be time to pump some water out of the pond to keep the market garden going. Adapting is what farmers do, and it’s what cattle farmers in the Southern Hemisphere did nearly a century ago when they needed a breed that could contend with severe drought conditions. That effort gave rise to Droughtmaster cattle.

When cattle ticks arrived in North Queensland, Australia, in the late 1800s, cattle farmers (known as graziers Down Under) knew theyâ€™d need to adapt to protect their livelihoods of keeping British cattle. They crossbred various subspecies trying to find a product with parasite resistance. But things only got worse in the mid 1890s. The Federation Drought (“the worst since European settlement,” according to the National Museum of Australia), combined with massive overfarming to leave the land arid, bare and unaccommodating to cattle breeds such as Shorthorns and Herefords.

In 1910, something of a breakthrough appeared in Australiaâ€™s attempts to breed cattle that could thrive on the countryâ€™s land. Curators at the Melbourne Zoo loaned three Zebu bulls, the countryâ€™s first imported Bos indicus cattle, to the graziers. The crossbred offspring of the humped South Asian animals were better suited for the Australian countryside than straight British breeds, though they didnâ€™t have the proportions familiar to graziers.

The severe drought still raged in 1926, when one R L (Monty) Atkinson set himself to the task of creating a tropical breed that yielded meat more like British cattle. He got access to three half-breed Brahman cows, an American zebuine beef cattle derived from animals originating in India. Starting in the 1930s, he joined them to Shorthorn and Shorthorn-Devon cross cows. He carefully bred up his cattle over the years while others with Brahmans in a breeding program. Eventually, these innovative breeders arrived at a beef cow that was just about perfect for Australiaâ€™s inhospitable environment: the Droughtmaster.

Whatâ€™s so great about the Droughtmaster?

For one, the breed is parasite-resistant, meaning the breeders effectively addressed the threats of cattle ticks on a herdâ€”low birth weights, loss of condition, tick worry, decreased milk production and even transmission of the potentially fatal Tick Fever. What’s more, Droughtmaster cattle also display resistance to internal parasites, eliminating the need for expensive vaccines, cumbersome rotational grazing schedules and treatment plans. Tick resistance in cattle is still an area for study, with most evidence pointing to a trinity of conditions in the Droughtmaster: ticks canâ€™t hide in their short hair, the breedâ€™s sweat glands produce a repelling chemical, and their immune system responds to all manner of parasites.

As the name implies, the Droughtmaster thrives in conditions that would undo other breeds. In addition to requiring less water than other beef cattle, the breed has a markedly slow metabolic rate. So in drought conditions, when healthy native grass is in short supply, the Droughtmaster can thrive because it never needed a lot to eat anyway. The breed has a few other traits that add up to a remarkable digestive efficiency, too, including a small first stomach, an ability to recycle nutrients and a slow protein turnover rate. According to the AustAsia Group, at 90 days, a steer can maintain a medium growth rate performance on as little as 1.45 kilograms (thatâ€™s just a bit more than 3 pounds) of lower-quality hay per day.

The breed is optimized to tolerate heat, tooâ€”no small benefit considering the energy waste caused by heat stress. Its loose, saggy skin is partly responsible for this adaptability. It helps the animal dissipate body heat, as does the short hair. The Droughtmaster also has more sweat glands than other breeds, and these cattle are noticeably larger. That lower metabolic rate helps the animal produce less heat, keeping things cool even as temperatures start to increase.

Droughtmasters exhibit a number of other beneficial traits, including lower chances of eye problems (thanks to hooded eyes and red pigment), calving ease, strong foraging abilities and a docile demeanor. Despite all these advantages, the animal is still excellent for beef production, yielding a carcase with a high percentage of well-marbled, good-colored meat. So itâ€™s no wonder that, after decades of popularity in Australia, the breed is becoming more common in countries in Asia, Africa, Latin America, South America, the Middle East and the Pacific Islands.