Chickens are the standard egg layers, but ducks can bring distinct value to the backyard, too, in the form of eggs, pest control, entertainment and more! 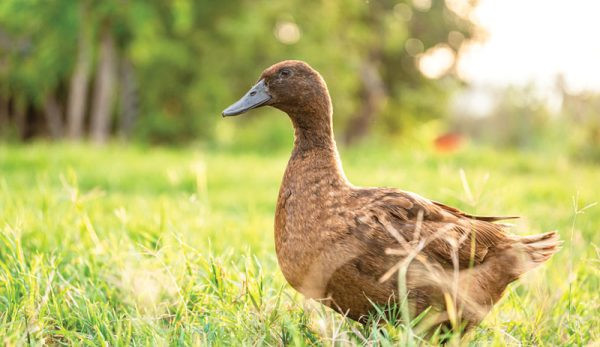 The duck has earned an important‚Äîyet underestimated‚Äîplace in the American psyche. From Donald and Daffy right through to the exploits of Duck Dynasty‚Äôs Robertson family, the humble duck plays a central role. So I found it somewhat surprising that the American Livestock Breeds Conservancy lists a whole host of duck breeds as in serious trouble.¬Ý

While the popularity of keeping backyard chickens has soared, the keeping of ducks has continued to plummet. This is a great shame, as keeping ducks can be a fascinating, rewarding and sometimes profitable hobby.¬Ý

Children absolutely love these comical birds. Through them, they can learn how to relate to animals in general‚Äîa valuable contribution in a world increasingly far removed from nature.

But can you really keep these birds in a backyard? I believe you can, if you commit to fully researching and understanding their needs before you make a purchase.

Looking after any form of livestock is a responsibility that should never be undertaken lightly. You also have to be sure that you have enough space and time and can offer a suitable environment for the right type of waterfowl. I (from boyhood) successfully kept ducks of several breeds in a reasonably sized suburban backyard.

My first duck was an impulse buy (not recommended) from a pet shop. He grew into a ridiculously tame male Khaki Campbell. Of course I named him Donald!

Donald was free to wander the garden during the day and locked into a shed at night. One winter‚Äôs evening, I got held up at school and a family member who was at home forgot to shut him away. By the time I got home, Donald was gone, only a few feathers and a skid mark in the rose bed that showed his valiant efforts to reach the safety of the house.

A fox had taken him. It was a bitter lesson cruelly learned.

Before anything, please check your local zoning laws. Zoning and health restrictions present an increasing hazard to those wishing to keep any form of poultry in urban and suburban areas. Neighbors may also object to noise, which in certain breeds (such as Call Ducks‚Äîa clue is in the name!) can be considerable.

Here is where research is invaluable. Start by attending a local poultry show. There are quieter breeds available and (in complete contrast to chickens), with ducks, the male is the quieter sex. If you don’t need eggs, a couple of pet drakes can provide an excellent pest-reducing service.

No Pond? No Problem

You don‚Äôt need a pond to keep ducks. You do, however, need to ensure that they can submerge their heads and necks and be able to throw water over themselves.

I have found that the very best receptacle to allow this natural behavior is a simple children‚Äôs plastic swimming pool. I received some seriously funny looks when buying five pools in the depths of winter from a local store. But these can easily be emptied, cleaned, refilled and moved to fresh ground.

This beautiful breed takes its name from one of the most famous duck breeders of all time:¬Ý Reginald Appleyard. This renowned British poultry breeder and writer first developed the breed the 1930s. He set out to breed a duck that combined size and beauty with lots of large, white eggs.

Having kept Silver Appleyards for a number of years, I can say he more than achieved his goal. This gorgeous, quiet duck is easily contained. It‚Äôs a perfect example of a dual-purpose breed, as drakes make excellent table birds, full of flavor.

For those with limited space there is even a smaller replica available‚Äîthe Miniature Silver Appleyard!¬Ý

This is a rare duck in the U.S. but well worth seeking out. These ducks the best layers of the small breeds and have quiet, friendly natures‚Äîpossibly the best duck for a backyard. You can expect around 150 large eggs a year.

The origin of this exquisite little duck, the Black East Indian, is shrouded in mystery. What we do know, however, is that it‚Äôs a very old breed, described in The Poultry Book back in 1853. It‚Äôs strikingly beautiful, with a lustrous green sheen that really has to be seen to be believed.

This little fella can be slightly nervous and would certainly benefit from having its wings clipped. It makes an excellent forager, too.

It‚Äôs another perfect duck breed for those lacking space. Sadly, it isn‚Äôt renowned for its laying ability. One could expect only 10 to 15 eggs a year.

This old breed has been found depicted in centuries-old temple wall carvings in its homeland of Indonesia. In 1876, the captain of a tea ship brought this distinctive duck to Scotland, where it was eagerly distributed amongst his farmer friends.

Hens are first-class layers, and its prolific egg-laying abilities brought the breed global fame. You can expect up to 275 eggs per year.

Indian Runners are extremely active. If they‚Äôre able to forage for most of the year, they‚Äôll wander far and wide picking up most of what they need.

The Khaki Campbell, a duck breed known all around the world, is famous for its prolific egg-laying ability. Good strains can lay an astonishing 300 eggs a year!

It was named after its creator, Adele Campbell of Gloucestershire, England, who developed it in the late 1800s as a top egg producer. She wasn‚Äôt too concerned about its looks.

Perfect for the beginner, ducklings are hardy and easy to rear and, if handled from an early age, get incredibly tame.¬Ý

The Cayuga is named after Lake Cayuga, New York. Another black duck that has an almost unbelievable iridescent green sheen to its feathers, the Cayuga is incredibly hardy, an excellent forager and a moderate layer.

New owners are often surprised by the presentation of a black egg! This usually occurs at the beginning of the season, after the first dozen or so eggs are laid. They slowly get whiter.¬Ý

This is another rare breed that can be difficult to track down, but it‚Äôs well worth the effort and deserves more admirers. They‚Äôre quiet and, although large and needing a reasonable amount of space to forage, adaptable and willing to put up with smaller quarters than most light breeds of duck.

Hailing from Central and South America, Muscovy ducks make almost no noise except for a gentle hiss. However, that doesn‚Äôt make these ducks perfect for a backyard. The reasons are that these powerful birds are excellent flyers and large males can sometimes be aggressive.

However, if you have some land, this duck (the only domesticated breed not derived from the Mallard) makes an excellent choice.¬Ý

Prized for their succulent flesh, the Muscovy is prized as a table bird. The females make fantastic broodies, and both sexes are enthusiastic foragers.

Another huge benefit of this duck is its ability to hoover up bugs! If it creeps or crawls, this duck will eat it. They can lay 30 to 40 eggs a year.

Ever since my tragic loss of Donald, I have been passionate about birds being housed correctly. My ducks are penned in housing made from recycled plastic as I find it easy to clean: A quick jet wash makes them as good as new! Fox-proof wooden housing is just as good. All duck houses, whatever they‚Äôre made from, need to be designed with a door that allows easy human access.¬Ý

Maintaining hygiene is vitally important in duck-keeping. These are messy birds, and bedding will need changing (and nest boxes need cleaning) at regular intervals. It‚Äôs vital that the house is also well ventilated. The thick feathering of waterfowl is all they need for protection from the cold.

Unlike most chickens, ducks won‚Äôt obediently put themselves to bed. I‚Äôm sure my neighbors have had many a laugh watching me shepherding my ducks into their house for the night. A little tip I‚Äôve learned that makes this job a little easier is to place the house in a corner of their pen.

For bedding, I use wood shavings from untreated wood. Some disprove of their use, citing potential digestive problems if the ducks eat it. But I‚Äôve never encountered this.

Don‚Äôt use hay. It‚Äôll get damp and cause mold organisms and fungal spores to form.

Laying ducks should be kept in their house until 9 a.m. This will ensure most eggs are laid in the house instead of around the garden or even in their swimming pool!

A couple of ducks can be kept in a decent-sized backyard, but the success of this will heavily depend on your weather and soil. The ideal ground for duck-keeping is a free-draining, sandy soil. The very worst is a heavy clay.¬Ý

However, two or three laying ducks can still be kept, regardless of your soil type, if you pen them on a gravel surface. The gravel needs to be of the large and smooth type. This won‚Äôt hurt their delicate feet and will prevent the birds from turning the area into a mud bath.

It will also allow their watery droppings to wash down into the ground.

If you combine this all-weather pen with lots of free-range time (when the weather is dry) on the backyard lawn or rooting around the garden/veggie patch, you should have some very healthy, happy and productive ducks!¬Ý

Many of us face increasing economic difficulties, which makes growing our own food even more appealing. One valuable source of protein comes from the humble egg.

Chicken eggs are, of course, the most popular. But duck eggs are usually larger, weighing about 3 ounces or more. They also have a slightly higher fat content and are far richer in flavor.¬Ý

The duck egg also contains a lot of albumen (egg white), which makes them highly sought after for baking. A word of warning, however: Duck eggshells are highly porous, so always make sure you maintain a scrupulously clean nest box!

I‚Äôve found the best food for my backyard ducks comes in the form of formulated pellets, predominantly made from a wheat/soya mix alongside many other essential minerals and trace elements. Of course, if they can forage, your birds will find a surprising amount of food for themselves.

Ducks are fantastic at getting rid of pests, such as slugs. In Thailand, rice farms employ thousands of ducks to rid their paddy fields of harmful pests. On a far smaller scale, your birds will do the same in your backyard or parcel of land.

However, especially during the cold, short days of winter or when birds are in full lay‚Äîsupplementary feeding with pellets is essential.

The birds also enjoy wheat. I often throw a couple of handfuls of grain into their pool. They thoroughly enjoy dabbling under water, and it has the added benefits of washing their eyes and keeping the grain safe from sparrows.

This article originally appeared in the November/December 2022 issue of Chickens¬Ýmagazine.

Hobby farmer Lee Connor is an author and illustrator, specializing in features for pet and lifestyle magazines.