Although the taxonomy of squash confuses me sometimes, I can still figure out which squash flourishes in my little area. 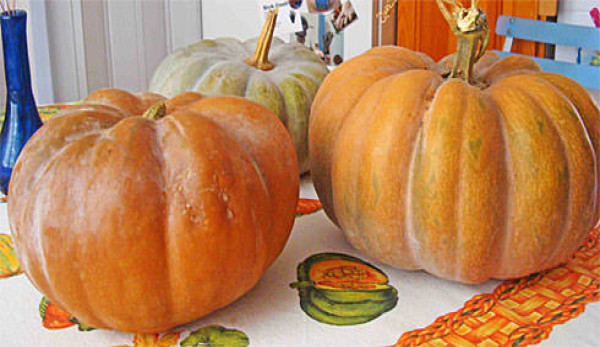 These are the three best-looking Dutch squashes that came out of my garden this year.

I bought a packet of squash seeds in Holland, The Netherlands, last year, and I grew a few of the plants this season in the garden. A few weeks ago, we harvested the squashes. Shown above is a photo of the best-looking three. I could have sworn the fruits had an unusual yellow skin tone on the seed packet, but what I got were a dwarf version of Muscade de Provence, which is a very popular squash in northern European gardens. I suppose I should save the seeds, as dwarf cheese squashes are all the rage in farmers markets these days, the larger squashes being deemed too big for easy retail sale.

IŌĆÖve always been a bit baffled by squash naming, being somewhat aware that there are a few notable genera, including Cucurbita maxima, Cucurbita moschata and Cucurbita pepo, and that pumpkins and zucchini are pepos, and the winter squashes are the two mŌĆÖs. In my quick online research for this blog, I cracked up when I found Muscade de Provence variously identified as a member of the maxima, moschato, and pepo genera. In this taxonomic scramble, I vote for the correct name being probably something like Cucurbita moschata Muscade de Provence.

I came across lots of other names for this squash, such as Fairytale (It has fruits shaped like the pumpkin-turned-carriage in Cinderella.), French Cheese (It is a cheese-type and an obvious sister of the Long Island Cheese squash.), Musque, and Musqee de Provence, and even potiron bronze de Montlh├®ry! In any case, IŌĆÖm certain that what we have is a deliberately dwarfed version of the classic Muscade de Provence. Those big Muscade squashes can weigh 30 pounds, and our squashes are much smaller, perhaps 3 to 5 pounds each.

Squashes do interbreed relatively easily, as long as adjacent plantings allow easy pollen transfer by bees and other pollinators. I would like to breed some of the colorful yellow and green stripes into one of the mini muscade, but again, IŌĆÖm confused taxonomically. If Tonda Padana, also known as American Tondo, my favorite yellow-with-green-stripes squash variety is a Curcurbita pepo as I suspect, then thereŌĆÖs a good chance I wonŌĆÖt be able to cross it with a moschato, as I suppose the Muscade is. Ha!

Luckily, growing these squashes is pretty easy around here because we donŌĆÖt have those nasty squash stem pests. IŌĆÖve always thought of squashes as being perfect compost plants, so I try to dump a bunch of compost or similar into sub-surface holes before I plant squash. There doesnŌĆÖt seem to be a big advantage in early planting except in northern areas where the cold sneaks in early in fall. Space is the problem that I have, because the squash plants are really huge compared to the small size of the little planting areas we have on the cliff garden. I drape them up and over fixtures when I can, but even then itŌĆÖs a challenge because the vines can easily crawl up to 30 feet in length. I suppose I really should be growing this squash on a big, flat field near a canal somewhere in Holland.