3 Tips For Keeping Earwigs Out Of Your Chicken Coop

These insects love moisture and decaying plant matter. Here's how to prevent earwigs from claiming your coop and get them out if they've already arrived. 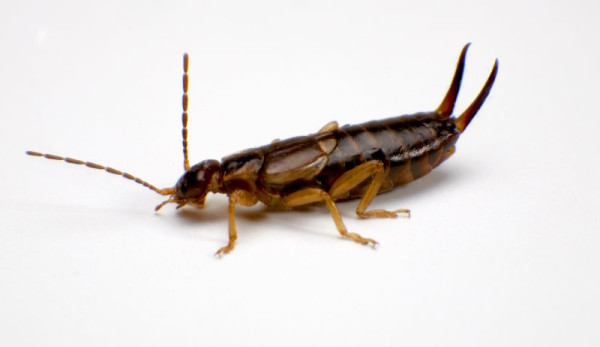 “MOM!!! There are termites in the Ancona coop!”

I had just started unloading the dishwasher when my 14 year old, Jaeson, tore into the kitchen from the backyard. A hundred unwelcome thoughts flooded my brain, the most prevalent being the poor Anconas buried in rubble as their coop collapsed while they slept. Jamming my feet into clogs, I dashed outside. “Where?” I shouted back to Jaeson, who was running behind me.

Unhooking the lock, I unlatched the sides, lifted the roof, and caught sight of perhaps a dozen critters scurrying out of sight under the rainguard flap. Controlling my revulsion, I lowered the nestbox roof, counted slowly to 20, then lifted the lid. Again the panicked scurrying, but this time I was able to identify the intruders. Fortunately, they were not termites. Dark reddish-brown, about an inch long, with rear pincers that bring to mind the Ceti Eels from Star Trek: The Wrath of Khan, our uninvited guests were earwigs.

A type of arthropod, earwigs are the sole members of the ancient insect order Dermaptera (“winged skin”). While they do indeed have wings, earwigs prefer to scamper on their six spindly legs. They are nocturnal and tend to congregate in damp, dark spots such as woodpiles, mulch and decaying plant matter during the day. In other words, the deep-litter floor, the darkened coop interior and the natural moisture from the birds had turned the Ancona coop into Earwig Central.

My mind might have been repeating “Ick!”â€”and Jaeson was definitely vocalizing itâ€”but, for the most part, earwigs are relatively harmless, despite their menacing appearance. Birds are their natural predators, so there’s a chance that the Anconas might have already been snacking on them before Jaeson’s discovery. Earwigs can even be beneficial, because they snack on such garden pests as aphids and maggots.

Earwigs taking up residence in one of our coops, however, is not what I would call beneficial. Given that they’ll happily make themselves at home if there’s moisture, ground cover and a source of food, our earwig guests were downright nuisances and had to go. Eradicating them without the use of chemicals that could harm our flock and preventing their reinfestation was fortunately handled in a few simple steps.

Earwigs love damp areas. Poultry coops unfortunately are almost always damp, thanks to the presence of water fonts, decomposing droppings and the moisture from the birds’ exhalations. While you might not be able to control these aspects, you can take steps to prevent more moisture from entering the structure:

Add overhangs above windows and vents. These can take the form of gutters and downspouts, eaves, awnings or just a sloping panel, but the goal regardless of design is the same: Redirect rainwater away from the coop openings.

Install waterproof weatherstripping at crucial joints. Prevent water from seeping in by covering the hinge area of your coop’s pop door, nestbox roof, and any other opening featuring a hinged lid or shutter.

Minimize spills and splashes. Consider moving your birds’ waterer out of the coop and into a shaded, sheltered area of their run. If you insist on offering your birds water 24/7, invest in a gravity-style system featuring nipplers or some other on-demand drinker to keep leaks and spills at a minimum.

Rotting wood, decomposing shavings, decaying plant matterâ€”all of these are paradise to earwigs. While it might not be fully possible to prevent nature from following its course in a location as natural as a farm, there are ways to cheat the earwigs out of their favorite hiding places:

Stay on top of repairs. All lumber weathers, regardless of how carefully you’ve painted, stained or otherwise treated it. Don’t allow for lichen tor mold to start settling into the wood. Should you notice these growing on your doors, lids and roofsâ€”or that any of these are starting to splinter and decayâ€”replace them as soon as possible.

Change coop litter frequently. There’s a lady in my local chicken group who happily shared how excited she was about taking care of her backyard microflock, including cleaning out their cute little coop every single morning. Kudos to her, but unless you’re driven to keep a picture-perfect henhouse, replacing the coop litter once a week is sufficient. To keep the earwigs from moving from the coop to the run, have a wheelbarrow standing by to cart the old shavings and bedding away to your compost area. Sprinkle an animal-safe desiccant such as Sweet PDZ to help keep the coop fresh, and cover it with an inch or two of your birds’ preferred bedding.

Keep the treats outside. Chickens adore food scraps and, let’s face it, our flocks are a handy way of disposing of vegetable parings and other kitchen leftovers. Earwigs love decaying plant matter and will happily find their way to rotting eggplant butts, discarded cucumber slices and other vegetables you’ve shared with your flock. If possible, designate a feeding zone that is specifically for these human discards. Your birds will quickly train themselves to look for their treats here rather than where you’d tossed them into their run, where they might end up dragged into the coop to rot.

Knowing how much earwigs thrive in moist environments, I quickly headed to the garage and grabbed our jug of food-grade diatomaceous earth. We regularly utilize DE in our flocks’ dust baths and coops to control and deter mites and other insects. For these uses, we follow the recommendations on the label to prevent the fine dust from adversely affecting our birds’ respiratory systems. Upon returning to the Ancona coop, I had Jaeson hold up the nestbox lid while I tossed in teaspoonfuls of DE along the entire length of the joint between the nestbox and the coop.

Afterward, I thoroughly washed my hands, waited two hours, then went to check on the earwigsâ€”not a single one to be seen. Two hours later, still no earwigs around. Nothing the next day or the day after, either. In fact, I haven’t seen the earwigs since I applied the DE. I haven’t seen a single insect, nor has Jaeson. As for the Anconas, they remained unperturbed by the earwig infestation, by my dusting their coop and by the subsequently cleaning. I guess it’s good to know that while we were going “Ick!” they just took the situation in stride … or were secretly amused by their humans’ antics.