Eliminate natural and manmade stresses to put your hens at ease and to ensure consistent laying. Here are some pointers for cutting stress in the chicken coop and run. 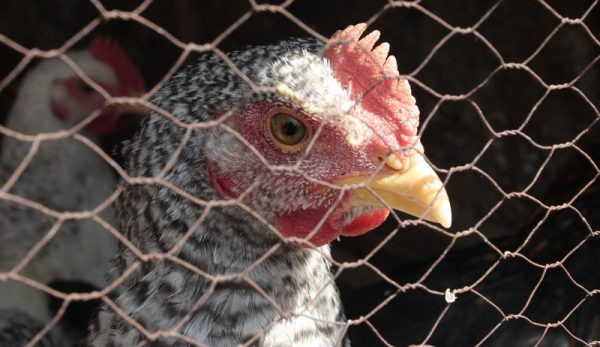 From installing houses for bluebirds and even owls to leaving my fall leaves alone, I do a lot to attract area wildlife. So, it shouldn’t have come as a surprise when a family of hawks set up a nest in a nearby tree.

The one thing I hadn’t counted on? Eventually, the hawks and their offspring began doing low flybys directly over my outdoor chicken run. When their shadows passed overheadŌĆöand when, invariably, they made their unmistakable callsŌĆömy alarmed hens would scatter.

At least at first, the hawks probably thought they had a pretty good shot at a chicken dinner. But I had completely covered the top of the chicken’s run with netting and also reinforced some areas with extra chickenwire. Still, my hens didn’t necessarily understand that they were actually safe.

Fortunately, the area hawks eventually stopped buzzing my chicken run. But, if they hadn’t? The added stress could’ve taken a toll on my hens’ health and affected their egg-laying. Stress can negatively affect an egg-laying chicken.

ŌĆ£The process of releasing the yolk, the yolk passing down the oviduct and putting on the egg whites and the shell membranes and the shellŌĆöit’s all a very routine process,ŌĆØ says University of Florida College of Veterinary Medicine Professor Gary Butcher. ŌĆ£But when there’s any kind of stress, hens can become irregular in their egg production and can decrease egg production. You may see some eggs where the shell is only partially formed.ŌĆØ

He adds, ŌĆ£If there’s a large enough population, you’ll find some that evenŌĆöwhenever they release the yolk into the body cavityŌĆöit’s not even picked up. They start to accumulate some egg yolks in the body cavity, if they are stressed out.ŌĆØ

Read more: What can you tell from an eggshell? A lot, in fact.

Not all sources of chicken stress are as obvious as hawks flying overhead. ŌĆ£If you put [your chickens] into a secure coop at night, they get to have nice, restful sleep at night,ŌĆØ Butcher says.

At least they should be able to rest easy. ŌĆ£Let’s say there are predators coming around all night long, and you don’t even know that they’re there,ŌĆØ he continues. ŌĆ£Maybe there are flickering lights in the henhouse. Or rats running around scaring the hens all night long. There could be dogs outside barking all the time. Or there are raccoons scratching and trying to get in.

“Those all can cause hens to be distressed. And, when hens are distressed, anything that interrupts their normal pattern can be a problem.ŌĆØ

Other sources of stress may include too much disturbance from people, the effects of disease, or even mite infestations.

ŌĆ£I’ve seen situations where … all night long, these mites jump on them,ŌĆØ Butcher notes. ŌĆ£They suck [the hens’] blood and crawl all over them. Then, the hens are really nervous and they don’t sleep comfortably.ŌĆØ

Eliminating mites and other possible health issues is one obvious way to reduce chicken stress. Dissuading would-be predators, so that they simply mosey along, pays dividends too.

Just how can you make the henhouse and outdoor runs virtually predator-proof? First, I buried chickenwire about 12 inches below the soil line all the way around my outdoor chicken run.

ŌĆ£When you bury your wire, make sure that it curves away,ŌĆØ Butcher recommends. ŌĆ£You want to curve it because a lot of these predators will start to dig down. If the wire is [buried] straight down, they can get to the bottom and then go underneath it.

“But, if they go down and it starts to curve away when they hit that, they don’t think about digging backwards and going under. They keep on trying to dig straight down and then they realize that they can’t get in.ŌĆØ

As for the fencing you choose? Make sure its mesh size is small enough to thwart especially grabby critters. Before he had reinforced one of his own chicken runs, Butcher lost some of his hens to raccoons.

ŌĆ£Somehow, they would convince those chickens to get near the fence,ŌĆØ he recalls. ŌĆ£And then they would reach in and grab the chickens’ heads and try to pull them through. It was horrible.ŌĆØ

Raccoons also may be able to get underneath raised cages and grab your chickens’ feet.

Read more: These 15 tips will help you predator-proof your chickens.

In addition to my buried chickenwire, I’ve also spaced cement blocks around the perimeter of my run. And, I topped the run with a couple of layers of bird netting. To keep the netting in place, I wired it to the top and sides of my fencing at 3-inch intervals.

Finally, I spaced strips of white cloth along the top of the netting. (This has helped to keep area wild birds from accidentally getting caught in the hard-to-see netting from above.)