I was out working in the yard the other day and I noticed some funky growths on the small spruce tree we planted a few years ago. 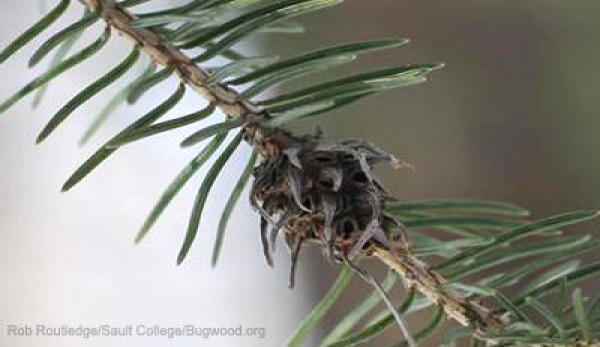 I was out working in the yard the other day and I noticed some funky growths on the small spruce tree we planted a few years ago. The growths are spiky and cone-shapedâ€”a clear sign that our little tree is the victim of Eastern spruce gall.

The galls are caused by a small insect called the Eastern spruce gall adelgid. Female adelgids lay clusters of eggs in the spring near a growth node. When the young insects hatch, they begin to feed on the plant tissue. As a response to their feeding, the plant begins to produce a growth called a gall (it’s like a cyst of tissue) that serves to protect the insects feeding inside. Early in the season, the gall is light green in color and looks much like an immature pinecone but with needle tips emerging from it.

In late summer, the galls will turn brown and crack open. The adult adelgids will then emerge and fly off. These winged adults will then breed and lay more eggs in growth nodes. The resulting nymphs spend the winter nestled just under the bark of the tree and continue the cycle anew.

The good news is that the galls these insects form will do little damage to our tree, though if the infestation were severe enough, the tree’s growth may be stunted.

So I’m headed out to the garden this afternoon to prune out any green galls I can find before they turn brown and crack open. I will destroy them by tossing them into the trash,though I could also burn them. If the infestation gets worse next year, I’ll treat it with an application of horticultural oil in late April, after new eggs have been laid and before the protective galls are formed.Â