Some require season extenders or even transplanting, but these crops will be welcome among customers eager for fresh produce in early spring. 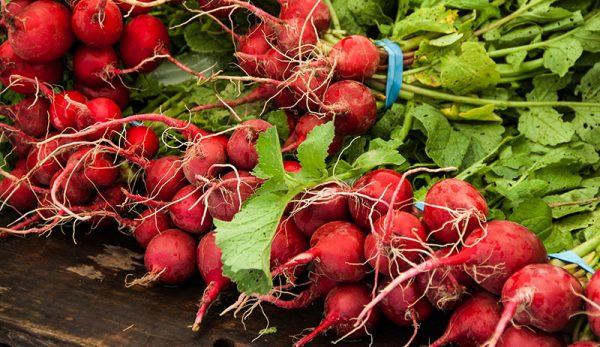 In early spring it can be challenging to have a lot of marketable produce. Weather doesnâ€™t always cooperate. It can be hard to find time to get the crops started. However, with a little strategy and the right selection of crops, the spring can be a relatively bountiful time at market.

Planning is important for success here, and some amount of season extension material (such as row cover or even a high-tunnel or greenhouse) helps a lot, but it’s not necessary for all the below crops in all climates. So I provide some planting ranges and some thoughts on how to beat the competition to market and start building those relationships in April for the long summer.

Lettuce is fairly easy to sell in the early spring when people are itching for greens, but it can also be a surprisingly easy crop to grow over winter for early spring with a couple of big â€śifsâ€ťâ€”if you plant it early enough (December or January for March and April); and if you have a way to keep it well protected from frost and snow. So a high tunnel or greenhouse is optimal but not required. Sturdy hoops and some plastic, or heavy row-cover, might be sufficient in places with moderate to low snow fall.

Not unlike lettuce, early kale will need to be planted in the ground in the early winter. Sometime after the solstice is best to avoid â€śboltingâ€ť in the spring. So late January is a good time as long as you have a covered place to grow it because, like lettuce, sturdy hoops and some plastic or heavy row-cover might be sufficient in places with moderate to low snow fall. That said, hardier kales will handle a hard frost or five.

Every year when we plant garlic we also plant a section very tightly for what is called green garlicâ€”essentially under-mature garlic that looks very much like a leek but tastes like delicious garlic. Generally we use the smallest cloves we have left to accomplish this and planting them 1 inch apart in rows about four inches apart. The goal here is density but garlic will grow in most areas really well without cover all winter. Also, you can sell it in bunches (again, like leeks), for a fair price. We usually do three large green garlic for $2.50. Foodies and chefs will love you for it.

In the early spring (or at least around Kentucky Derby time), mint can be a surprisingly easy crop to sell because people are simply eager for something fresh. It’s an aggressive perennial, so you can plant mint almost any time, though spring and fall plantings generally take better. It pops up early in the spring and even earlier if you give it some cover. Sell mint in big bunches or small bags.

As a 25-to-30-days-to-maturity crop, this is one of the easiest crops to get to market early in the spring (save for watermelon and storage radishes, which take longer). Plus, what a beautiful site radishes are on the market table. I highly recommend planting a single round early (January or February when even radishes will take two months unless supplemental heat is provided) and under cover, then planting in small successions every week to guarantee a consistent harvest.

At about 30 to 40 days to maturity, arugula is another great crop for early markets as it will not only grow fast and robust, but the early spring tends to have fewer pest issues that can often plague arugula all summer. Sow or transplant in early January or February. With those first plantings you might get second cuttings, but also plant in small successions as the season approaches.

Spinach can be a challenge to germinate after direct seeding, so I recommend transplanting spinach plants (as tedious as that might sound) in the midwinter (around January) for early spring crops. If you donâ€™t want to transplant in the winter, I’ve successfully germinated the seeds by sowing them in December (under cover). This way, they take a long 20 days to germinate but germinate better than in the heat and fluctuating temperatures of March and April. Early spinach can provide a very profitable and easy-to-sell item to customers eager for fresh produce.