Bugs, it's what's for dinner. 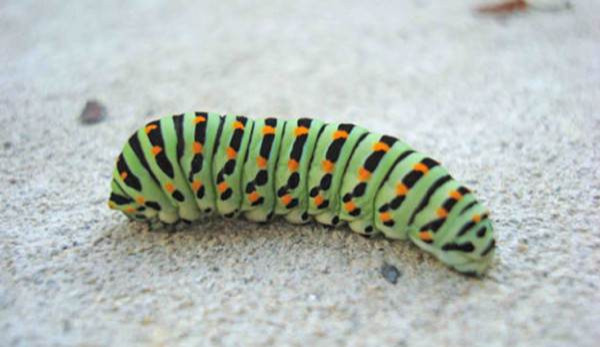 I spotted the colorful grub shown above on my office windowsill the other day, and apart from marveling at the wonderful coloration of the creature, I was disappointed in myself that I didnâ€™t eat it. We in the West are culinary wimps in regard to eating insects, and thatâ€™s a part of my psychological heritage that I donâ€™t like very much. I wish I was a bug eater, but Iâ€™m not. Oh sure, like everybody from California, Iâ€™ve eaten a few chocolate-covered grasshoppers, but there is some weird uncertainty that keeps me from putting morsels like this grub in my mouth.

This situation is doubly frustrating because I know where to find a lot of potentially tasty bugs. Feeding hawks and robins with grubs has been a hobby of mine for many years. Iâ€™m good at digging around under leaf accumulations in the garden and woods, finding big fat grubs. These grubs can then be placed on a tall post or similar in an area known to contain sparrow hawks or robins. Once the grubs are wiggling, which is attractive to their eaters, I step back out of the way and wait for a bird customer for my offered snack. It doesnâ€™t usually take too long for the birds to swoop down and scoop up the treat. I now find it annoying that I donâ€™t chew on the succulent little creatures myself. Iâ€™ll bet theyâ€™d be great with a bit of minerâ€™s lettuce or some wild asparagus.

I do think the bug-eating phobia Western society created will fade away in the upcoming decades. I predict that, in the future, many people in the Western world will cultivate worm and insect colonies that turn kitchen waste into edible worms and insects.

I know some farmers here in Italy who raise snails as a crop. Raising insects doesnâ€™t seem like it would be that difficult, and I have raised mealworms. A plastic box filled with sawdust was the basis and then I added some fresh potato or apple and then some grains like oatmeal or birdseed for food. Iâ€™ve also raised crickets, and their culture is about the same, but they like a layer of dirt, some egg cartons to give them housing, and fruit and vegetable scraps for feed. I havenâ€™t tried raising worms and crickets together, but it seems like a natural combination. I have raised a lot of worms, and I have a big box full of them now that I use to process our kitchen waste. Perhaps one of these days Iâ€™ll use some to make a casserole.