Though modern conveniences allow year-round storage, meat was once a seasonal concern, reflected in many of our dining traditions of today. 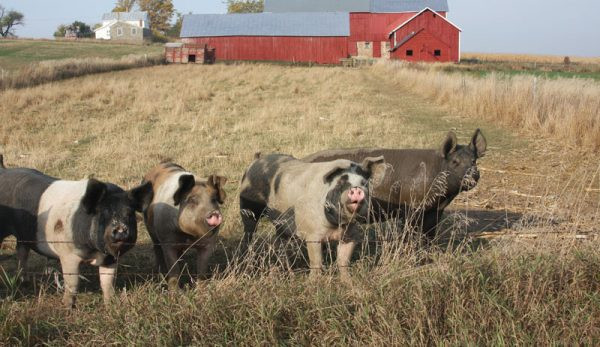 Turkey at Thanksgiving, corned beef at Passover, ham and lamb at Easter…. Our traditions surrounding meat eating at holidays didn’t occur by accident. Before we as humans knew industrial farming, grocery stores and commercial refrigeration, we knew meat as seasonal fare.¬Ý

‚ÄúTraditional livestock-rearing was seasonal, with winter the most significant not just because of the expense of keeping animals indoors where instead of grazing they had to be fed, and the necessity of storing food to last over the winter,‚Äù says Paul Freedman, Ph.D., author of Why Food Matters and American Cuisine: And How It Got This Way.

Salted, brined and cured meats boasted some shelf life. But fresh meats became available when animals came mature (or in the case of veal, lamb and suckling pig, mature enough) and were slaughtered.

Not all of the U.S. experiences harsh winters, of course. This means seasonality rested less on weather and more on animal physiology in those areas. In Florida, for example, pasture grasses grow strong in the mild weather of January and February. But they go dormant in the heat of July and August.

Still, the length of animal gestation and time it takes for the animal to mature remain the same no matter the climate.

Centuries-old religious traditions also shaped the seasonal timeline of meat consumption. ‚ÄúIn Catholic Europe, because there were a lot of fasting days, and especially over Lent, the whole meat industry shut down during the 40 days of Lent except for Jewish or Islamic butchers,‚Äù says Freedman, a professor of history at Yale. ‚ÄúAt the same time, you have to have your lamb ready for the day, i.e. Easter, when the fast ends.‚Äù This added an urgency to seasonal production of livestock.

This break in meat consumption meant a boost to the seasonal fishing industry of the day. It resulting in a lot of salted fish that could be sent inland when needed.

On the farm, today‚Äôs pasture-based livestock- and poultry-rearing practices reflect those of pre-refrigeration times. This despite our refrigeration capacity all but erasing from our consciousness the concept of eating meat by the season.

‚ÄúHistorically, the United States has such a large pork-eating heritage because it was really cheap to raise a pig,‚Äù says Sarah Wassberg Johnson, a food historian featured in The History Channel miniseries ‚ÄúThe Food That Built America.‚Äù

‚ÄúA lot of people, particularly in the 18th and early 19th centuries, their pigs were just free range.‚Äù

(Incidentally, Wassberg Johnson points out, this free-ranging caused problems in some cities. In Philadelphia, pigs ran wild into the 1800s.)

Pigs were fattened in the forests and orchards in the fall. During this time, trees released their fruits and nuts. This made fall the ideal time to harvest pork.

‚ÄúFresh pork was not consumed on any large scale except for at harvest time,‚Äù Wassberg Johnson says. ‚ÄúYou also get the seasonality of things like blood sausage coinciding with harvest time.‚Äù

Farmers harvested lard for its value in the kitchen and home, curing, smoking, salting and brining the rest to eat all year.

While initially a homesteading chore, meat production began to industrialize in the 1830s and 1840s.¬Ý

‚ÄúMeat production in the United States is really influenced by two major changes in American life and industry,‚Äù she says. ‚ÄúOne is railroads, and one is the ice harvesting industry, which seem like very disparate things. But because you have the ice harvesting industry, you can have refrigerated railroad cards and you can have refrigeration and ice boxes in commercial industry and in the home.

“That means that your meat does not necessarily have to be preserved. And you can keep meat relatively fresh for longer than you were able to historically.‚Äù

Around this time Cincinnati became known as Porkopolis. The railroad system made it possible for farmers to herd their animals to the trains and transport them to this central processing point. Salt pork, pickled pork and cured meats came out of Cincinnati and were then distributed by ice-cooled railroad cars and boats to other parts of the country.

Today, pasture-raising your pigs may look like a combination of allowing them to forage alongside a grain ration, and you likely still harvest them before the worst of your region‚Äôs weather.

Pigs can grow to what we now consider market weight ‚Äî 275 pounds ‚Äî in six months or less. But cattle take 24 months to reach their full maturity on forage alone; about half that when grain fed. This means cattle matured over the winter unless harvested at veal stage‚Äî4 or 5 months of age.¬Ý

Consider, too, the slaughtering facilities available traditionally. Cattle are large animals, and it would be easier and less dangerous to harvest and process a 450-pound veal calf than a 1,000-pound mature steer on your homestead.

Then the someone had to decide what to do with all this meat. Without refrigeration, meat had to be cured‚Äîcorned beef, beef jerky and other charcuteries, the indigenous traditional pemmican, etc.‚Äîor eaten.¬Ý

Changes Down the Line

Here, too, beef consumption changed alongside the railroads and ice-harvesting industry.

‚ÄúPart of American legacy is the cattle drive‚Äîtaking cattle to railroad centers to ship to Chicago to process and ship all over the country,‚Äù Wassberg Johnson says. ‚ÄúHistorically, meat was transported on foot, or the hoof or the claw, I guess, if you‚Äôre thinking about poultry. You would have drovers. The production of the meat was more regional and localized because you had to transport it on foot.‚Äù

‚ÄúBy the late 19th century, meat is not really seasonal anymore, with the exception of poultry,‚Äù Wassberg Johnson says.

Read more: Meat your meat needs with your own herd of cattle! Here’s how to start.

The last of the mainstream meat animals undergo industrialization, chickens didn’t always carry distinction of meat birds and egg layers common in the poultry industry today. When dual-purpose breeds were the norm‚Äîbefore Cornish-Cross and White Leghorns came on scene‚Äîchickens on your homestead supplied your family‚Äôs eggs year-round. It was unlikely you‚Äôd butcher a chicken in the fall, knowing you had a whole winter‚Äôs worth of laying to get through.

(Plus, you have all that pork to eat in the fall!)

‚ÄúAny kind of industry when you‚Äôre looking for one gender of an animal, what do you do with the other gender?‚Äù Wassberg Johnson says. ‚ÄúIn the dairy industry and in the egg industry, you harvest the male animals pretty young as meat animals. You get veal and you also get spring chicken, which are the young roosters, sometimes called pullets.‚Äù¬Ý

Butchering chickens ahead of winter weather wasn‚Äôt as much of an imperative as butchering larger animals at that time. Regional heritage chicken breeds were developed over time for their adaptation to the local climate so they could exist outdoors with minimal infrastructure requirements.

Chickens also have good feed conversion. That means they don‚Äôt need a ton of calories to maintain their weight and produce eggs.¬Ý

While homesteaders cured mammalian meats, they didn’t really process poultry. Wassberg Johnson points to the exceptions of potted pheasant, pigeon or squab. Fully cooked meat went into a container and covered with melted fat to keep out oxygen and act as preserving agent. Homesteaders covered this container and kept it in cool place.

This article, of course, takes an American-centric look at the seasonality of meat production and more specifically through a New England lens, a tendency of histories. In less wealthy countries, Freedman points out, adopting refrigeration and moving away from seasonal meat production isn‚Äôt assumed.

Many places still rely on fresh meat, rather than frozen, whether that‚Äôs by tradition or for a lack of home refrigeration. Livestock keepers still practice seasonal meat production around the world.

Much of seasonal meat production then, and now, connected to socio-economic status. ‚ÄúThe wealthy could manage to eat meat out of season, so it gave one prestige to serve veal in February, for example,‚Äù Freedman says.

If you had the resources and the labor to feed and house animals year-round, you could also eat them year-round.

‚ÄúIf you have a giant plantation where you are enslaving hundreds of people, you‚Äôre going to have a lot more access to fresh meat,‚Äù Wassberg Johnson says. ‚ÄúYou would be able to afford to keep beef cattle fed over the wintertime so you can slaughter them as needed. The same with pigs.‚Äù¬Ý

Most reading this article likely possess modern fresh-food and frozen-food storage capacities. But our land-based livestock and poultry rearing remain rooted in a time before we could pull pork chops out of the freezer for a summer cookout. Understanding the natural seasonality of meat can help us understand our animals and small-farm workings.¬Ý

In the 1850s, no one pointed out to their friends the just-picked apples on the table. Taverns didn‚Äôt boast these tomatoes are from the farmers market. Of course produce was just picked from your farm or a neighbor‚Äôs.

In fact, serving guests food that had come from afar was the mark of prestige. ‚ÄúIt‚Äôs no longer a big deal to eat bananas, which are tropical products. It‚Äôs been organized in an industrial fashion. They‚Äôre cheap, so everyone can afford them. But at one time, a banana was a rarity. So were pineapples, and you would serve them in lieu of seasonal fruit,‚Äù says historian Paul Freedman.¬Ý

‚ÄúIt‚Äôs only now that in New Jersey, for example, asparagus that‚Äôs seasonal and from New Jersey is much more expensive than asparagus that‚Äôs available all year-round from Peru. It is better. There‚Äôs no doubt about that, but the prestige accruing to the local product is historically unprecedented.‚Äù

The 1970s ushered in the local and seasonal marketing push. ‚ÄúIt‚Äôs both the zenith of the industrialization of food, from the supermarket to the canned soup industry,‚Äù Freedman says, ‚Äúbut it‚Äôs also the beginning of dissent, of organic food, [Alice Waters‚Äô famous restaurant] Chez Panisse, seasonality, and that has grown for the last 50 years.‚Äù

Historian Sarah Wassberg Johnson says that because of the scarcity of meat chickens outside of springtime, you find traditional cookbook recipes for ‚Äúmock chicken‚Äù or ‚Äúcity chicken,‚Äù which actually used veal.¬Ý

Look up some of these recipes. You may find these other meats shaped in the form of a chicken drumstick, breaded and fried!

Freelance writer Lisa Munniksma is the former editor of Hobby Farms magazine and the writer of HobbyFarms.com‚Äôs ‚ÄúThe News Hog.‚Äù She left the office for the farm in 2011 and is now part of an organic vegetable and livestock farm in Kentucky. During the winter, she travels to warm climates to learn about farming in other parts of the world. Follow her on Instagram: www.instagram.com/freelancefarmerchick