Jump on board the latest spring design trend featuring a beloved farm animal: the goat. 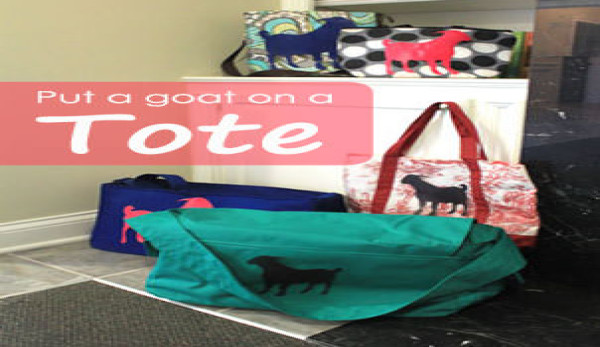 For several years,¬Ýputting birds on things has been a leading home and design trend, with birds making their way onto everything from teacups and pillows to lampshades and necklaces. But now that Americans‚Äô homes are chock-full of paraphernalia sporting silhouetted birdies in all sizes and colors, the novelty has lost its zing. This spring, people wanting to update their boring market totes or T-shirts can turn to a new design phenomenon that‚Äôs catching eyes on the runway and is sure to channel your inner farmer: the goat.

The goat craze is taking off thanks, in part, to three editors at Hobby Farms magazine, a nationally based niche publication for small-scale, sustainable farmers. (Disclaimer: The author of this article is also employed by Hobby Farms magazine.) The editors-turned-fashion-mavens combined their design ingenuity to elevate the name of one of their favorite farm animals and buck the bird trend.

“According to the Londonist, goats‚Äîbe they screaming, climbing or just being cute‚Äîare gaining such popularity they‚Äôll soon surpass kittens as the feel-good animal on the Internet,‚Äù says HF editor Stephanie Staton. “Pictures of goats on goats, goats on horses, goats on cars, goats on buildings, boats and bicycles are circulating like wildfire. I felt the timing was perfect for a goat-graffiti revolution.‚Äù

A Matter of Style
With the help of HF associate editor¬ÝAbby Tripp Heverin and HF assistant editor Cory Hershberger, Staton has been putting goats on everything from cakes and canning jars to garden sheds and backhoes. Each member of the trio has their own style when it comes to putting goats on things that, when combined, make for a powerful trend that‚Äôs taking the nation by storm.

“Putting a goat on something is not a practice to be taken lightly,‚Äù Hershberger warns. “You can‚Äôt just malign the goat‚Äôs image by poorly slathering it on your coffee mug or your T-shirt. Take time with your crafting material; put the love and care you‚Äôd give your goats into it.‚Äù

As Hershberger points out, the goat is an important component of farm life, providing its owners with companionship and a number of farm products, including fiber,¬Ýdairy and meat. As a ruminant, it requires special care to ensure its complex digestive system is well-nurtured. Although its silhouetted image invokes respect as it‚Äôs placed on inanimate (and sometimes animate) objects, when it comes to putting goats on things, the HF team encourages creative crafting.

Staton prefers a well-thought-out approach to putting goats on things that takes into account the personal tastes of those that see the goat-adorned object.

“Consider who will most likely see the goat and how that goat experience can better their lives,‚Äù she says. “It goes far beyond just slapping a picture of a goat on something. The colors you choose and the placement impact the overall perception of it, as well as how the person seeing it reacts.‚Äù

However, an emotional goat connection is not always necessarily the goal of goat graffiti. Tripp Heverin, for example, relies on the element of surprise to bring joy to the viewers of her goat work.

“I call it guerilla goating,‚Äù she says. “I recently put a goat on my husband‚Äôs car as he got ready to leave for work. He hasn‚Äôt thanked me for it yet, but I know he must be really, really pleased by such a thoughtful gesture.‚Äù

She points out that farm-animal design trends are not a new concept, but her personal motivation for putting goats on things is to distinguish herself as part of the millennial generation.

“When I was growing up, my parents put¬Ýcows on everything. Throw pillow? They put a cow on it. Wallpaper? Yup, cows there, too. A few Christmases ago, my father even gifted my mother with a 300-pound concrete bovine lawn ornament‚Äîher name‚Äôs Clarabelle, and they dress her up for holidays. I was always a pretty independent kid, so it‚Äôs no surprise that I decided to blaze my own trail and move to goats.‚Äù

DIY Goat Graffiti
While the HF editors/goat-graffiti extraordinaires relish being at the forefront of putting goats on things, it‚Äôs a practice that anyone, no matter their age or interests, can take part in. In fact, these entrepreneurs encourage everyone, especially hobby farmers, to start asking themselves what objects in their everyday lives would be improved by the placement of a goat.

Choosing the perfect goat color is a major part in successfully putting goats on things, and something Staton has pinned down to a near science.

“I personally aim to use colors that are not only seasonally appropriate, but also convey a mood,‚Äù she says. “For a timeless, elegant feel that puts the viewer at ease, I recommend slightly muted yet saturated colors, but I use bright, playful colors when seeking to cheer someone up or brighten up her day.‚Äù

Placement of the goat on the object is another key for getting the desired effect.

“Placing the goat front and center gives it visual impact and says, ‚ÄòI‚Äôm a goat. Marvel at my caprineousness,‚Äô‚Äù Staton says, though she recommends moving the goat around for a less-serious design.

And as Tripp Heverin points out, you don‚Äôt have to limit yourself to putting goats on things‚Äîyou can also put goats on people.

“I firmly believe that if you‚Äôre not putting goats on people, you‚Äôre really missing out,‚Äù she says. “The actress Reese Witherspoon famously said, ‚ÄôMy rule is, if it‚Äôs not moving, monogram it.‚Äô When it comes to goats, I say, ‚ÄòEven if it is moving, put a goat on it.‚Äô‚Äù

Tripp Heverin has found success putting a goat on her 15-month niece, and in her most recent endeavor, she put one on herself with the help of a talented tattoo artist. (“I know that I‚Äôll never regret getting a goat tattooed on my forearm,‚Äù she says. “How could I?‚Äù)

Caprine Success
With these tips, Staton, Tripp Heverin and Hershberger ensure anyone can find success in putting goats on things, and their story is proof. In a matter of weeks, what started as a simple (albeit brilliant) idea has taken off into a full-fledged business and an homage to the playful farm animal that has impacted their lives. They‚Äôve even been commissioned by the fire department in their hometown of Lexington, Ky., to put a goat on fire engine 13.

“To me this is just one of the first widely visible signs that the rest of the world is finally catching up to our ahead-of-the-game design sense,‚Äù Hershberger notes. “Once people start seeing the fire-truck goat decal and asking about it, it‚Äôs only a matter of time until goats are seen universally as the perfect animals they are.‚Äù

Ready to get started putting goats on things?¬ÝDownload this goat stencil and upload a picture of your goat graffiti in action in the HF goat photo album.

Oh, and by the way: APRIL FOOLS!¬Ý

Goat-graffiti Inspiration
Want to put goats on things, but aren’t sure where to start? Here are some goat graffiti ideas to get the creative juices flowing.