A poacher, a peeler, a ring, a slide—I see how five new egg-related products perform when it comes to cooking, storing and preparation. 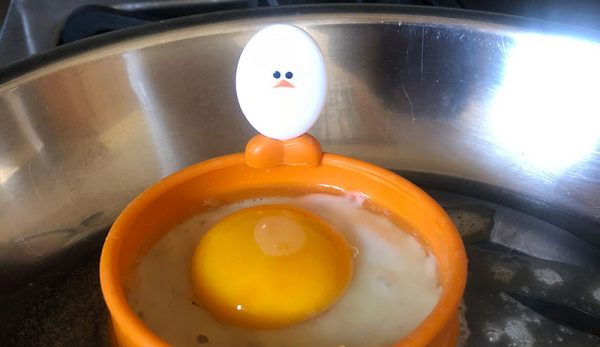 One advantage of being a poultry farmer is that friends and family generously acquire any gizmo, gadget and doohickey remotely related to eggs with intent to give them to me as gifts. Because I do the exact same thing, my cabinets hold a wide variety of egg innovations. Late spring saw a plethora of new contraptions come into my kitchen, so I recently tested some of these new toys.

The Egg Slide caught my eye immediately with its tall, curling black-wire design. When sorting through our hens’ daily efforts, I separate out the imperfect eggs, which I keep for our family. These end up cluttering the counter, leaving me with little space to prepare meals. The Egg Slide not only keeps these eggs—and my counter—tidy, but the gadget also adds an appealing artistic touch to my kitchen. It’s also fun: When I take an egg from the bottom of the chute, all the other eggs tumble end over end to fill in the gap. The only negatives so far? Sometimes the eggs land pointy side up, which is not the best way to store eggs, and sometimes the eggs descend so quickly that they hit another and crack. That has happened only a few times, fortunately, and I’ve just used the cracked egg instead of the one I’d just taken.

My son Bryce saw this in a supermarket and insisted we buy it. I’m still not sure whether it’s because he wanted perfectly round fried eggs to top his English muffins or because the gadget features a cute smiling egg on it. Whatever the reason, the ring came home with us. Even though it is made of silicone and I have baked with silicone molds, I was still a little concerned about whether the egg ring would withstand a frying pan’s direct heat. No need to worry: It barely warmed up, even after cooking six eggs in a row. The ring not only kept its shape but also prevented any egg from leaking outside the ring. We ended up with a half-dozen beautiful, circular eggs and a handy kitchen tool that washed easily after use.

A common complaint among my kids is that someone (namely me) hasn’t removed the eggs gathered earlier in the day from the collection basket. I bought a second basket to appease the masses, but that quickly became two baskets that I needed to unpack. Enter the Egg Carrier, which a relative saw at a farm-supply store and sent my way. Made of sturdy molded plastic, the Egg Carrier holds 24 eggs in individual hollows. Because the eggs are spread out in one layer, the carrier is bulky and somewhat awkward to manage—which is a positive, because it makes me unload it the second it comes in. The chief negative is that the Egg Carrier doesn’t store easily because of its bulk. It does safely cradle eggs, however, so there’s no accidental breakage from eggs piled on top of each other.

My son Jaeson is one of the world’s pickiest eaters. He does eat eggs, however. In fact, he adores eggs. Knowing this, a relative sent an Egg Poacher just for Jaeson. Trying to teach my 15 year old to properly poach eggs—simmer water with white vinegar, whisk to create a vortex, drop an egg in without breaking the yolk, fish it out before it overcooks—resulted in a frustrated student, an annoyed instructor and a heap of messed-up eggs. With the Egg Poacher, Jaeson just cracks an egg, pours it into one of the recesses in the poacher, puts on the lid and microwaves it. So easy, even my child could do it! The Egg Poacher is dishwasher safe, too, so the cleanup is easy. It might not produce poached eggs to my liking, but it keeps my teen fed and self-reliant.

I’m not quite sure which of my friends brought me the Egg Peeler, but this gadget arrived shortly after I posted a gripe on social media about my impatience shelling more than a dozen eggs to make egg salad. The Egg Peeler was supposed to make my life easier: Place the hard-boiled egg in the central chamber, then press down on the accordian-like top. Compressing this squeezy part generates enough forceful air to literally blow the eggshell right off the egg. Voila—a perfectly peeled egg in seconds.

Well, yes, but only if it had worked correctly. I sacrificed eight hard-cooked eggs to this gadget. Not one of them emerged fully peeled, or peeled at all. I did get crushed eggs, as if someone had stepped on a hard-boiled egg. Not exactly what I was going for. It did amuse the boys, however, which resulted in the sacrifice of about another dozen eggs. Waste not, want not: The smushed eggs became a treat for our flocks.