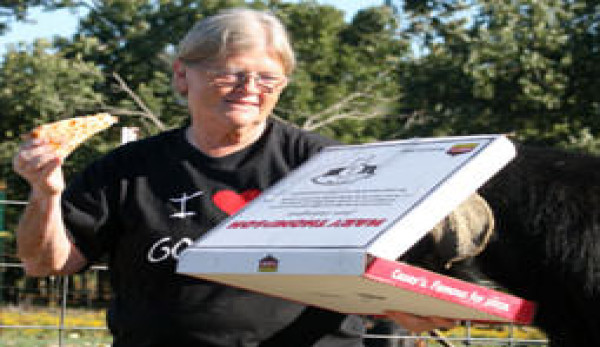 Hey, have you nominated your favorite barnyard friend in Martok‚Äôs Campaign Contest 2012? If you haven‚Äôt, check it out right now! There aren‚Äôt many entries yet and we need more. Let your favorite animal‚Äôs voice be heard!

And remember when I told you my¬†crazy-goat-lady mom is a finalist in Casey‚Äôs Famous People contest? Voting begins this week! Starting tomorrow, Tuesday, Sept.11, 2012, you can visit Casey‚Äôs Facebook page and click on Casey‚Äôs Famous People to view the cool mini-documentary Blair, Josh and Dustin from Barkley, an advertising agency, made of us animals, including studly me. And if you have a Facebook account you can also vote for my mom while you‚Äôre there. In fact, you can vote once a day Sept. 11 through Sept. 25, 2012, so please do! If she wins, Mom will put the prize money toward feed and treats for us animals. Yum!

Mom says voting in elections is an important thing that humans do because that‚Äôs how they choose the people they want to run their government for them. She says politics get pretty boring when you hear about candidates and see them in the news every day, so often, people don‚Äôt vote, especially if they don‚Äôt like the people running for office. That‚Äôs when she tells this story she first posted on her Facebook page. She said I can share it with you.¬†¬†¬†

I want to tell you all a little Election Day story. This happened in Minnesota, oh, about 25 years ago.

John and I had moved since the last time we voted, so I called to find out when the local polling place would open. (It was at an old grange hall way out in the sticks.) So I rushed right over there first thing in the morning‚ÄĒand no one was there.

I waited and steamed and after a half hour or so, I drove into Beroun to our former polling place. No, they said, I couldn’t vote there. I had to go back to Munch Township. So I drove back out there and they were just opening the doors (about an hour after the posted opening time.) So I stormed in and voted and was feeling pretty techy when I came out.

As I headed for my truck, an old, old man was alighting from his car. He was maybe 5-foot 2-inches, very wizened, thin and bent over, and he was wearing an old-fashioned black “Sunday best‚ÄĚ suit and the biggest grin you could ever imagine.

I smiled and said hello (because that’s how you do things in rural Minnesota), and he said, “Ah! A wonderful day, a glorious day, is day we vote! In old country we can’t vote. Here, every American picks leaders!‚ÄĚ And grinning from ear to hear he hobbled on to the polling place.

I still get chills thinking about that. We take so much for granted, including our freedom to vote.

So even if politics bore you, remember that story on Nov. 6 (that‚Äôs American humans‚Äô Election Day). Pick your favorite candidates and vote‚ÄĒbecause you can.