Electric Tractors Are The Future Of Farming

Better for the environment and easier on the farmer, electric tractors bring cost savings, reduced maintenance needs and flexibility to growers of all sizes. 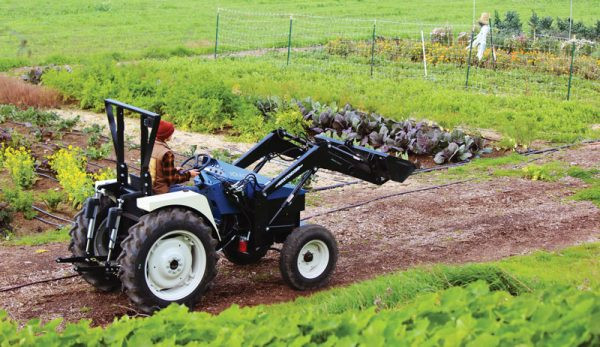 You might not always hear them, but you‚Äôll likely start seeing more electric tractors in fields across the U.S. and, eventually, the world. Unlike their rumbling, diesel-fueled counterparts, electric tractors are much quieter‚ÄĒand cleaner.

‚ÄúIt‚Äôs just like day and night for farm workers. It‚Äôs no longer destroying their hearing or their lungs, and they can enjoy the fresh air instead of breathing in diesel exhaust.‚ÄĚ

By 2017, Heckeroth had already released his first two models‚ÄĒthe Compact Electric Tractor (CET) and the eUtility Electric Tractor. (Heckeroth also expects to release another electric tractor, the eFarmer, later this year.) But the zero-emissions farm vehicles were actually a long time coming.

The seeds for Heckeroth‚Äôs work were planted earlier still‚ÄĒon April 20, 1970. ‚ÄúI decided on the first Earth Day that I wanted to find alternatives to burning fossil fuel because I could see that going to be a huge problem for all life on the planet,‚ÄĚ he says.¬†

A trained architect, he initially tried to make an environmental impact in architecture. ‚ÄúThen I switched to transportation and decided that tractors were probably the best electric vehicles,‚ÄĚ he says.

In part, battery technology has finally advanced enough to be able to support farmers‚Äô real-world needs. ‚ÄúWhen I first started, all there was was lead acid,‚ÄĚ Heckeroth says. ‚ÄúThe weight and longevity were the biggest problem.‚ÄĚ

These days, he uses lithium-ion phosphate battery technology. ‚ÄúThat is the safest lithium technology,‚ÄĚ he says. ‚ÄúThey don‚Äôt burn, and you can stick a nail right in them, and they don‚Äôt do anything. It‚Äôs pretty amazing.‚ÄĚ

Lithium-ion phosphate batteries can also last between 3,000 and 5,000 cycles. ‚ÄúThat can be anywhere from 10 to 15 years, depending on how much you use the tractor,‚ÄĚ Heckeroth says.

Just what‚Äôs involved when using an electric tractor versus traditional diesel? If you‚Äôre employing an energy-intensive implement or running the tractor for many hours, you may need to fill up on diesel.

Or in the case of an electric tractor, it might be time for a recharge.¬†

‚ÄúOr, if you have some implement on the front, you can swap out the battery pack on the back.‚ÄĚ

If you have solar arrays on your farm, you could keep an extra charging system docked there. ‚ÄúWhere I am in California, most of the vineyards have solar arrays,‚ÄĚ Heckeroth says. ‚ÄúSo you don‚Äôt have to travel too far to swap out a battery.‚ÄĚ

Read more: These 20 maintenance tips will help you keep your tractor running great for years.

Heckeroth may have gotten a head start, but he‚Äôs not the only one rolling out electric tractors. Kubota showed off a prototype of its lithium-ion battery-powered tractor last year. And John Deere has been working on an autonomous tractor that plugs into the electrical grid.

For its part, Monarch Tractor released its first electric, driver-optional, smart tractor in April with full production deliveries expected by the end of 2021. ‚ÄúThere‚Äôs a lot of technology that was already developed, commoditized and made production-ready in the automotive industry. So we took those bits and pieces in coming up with our tractor,‚ÄĚ says Praveen Penmetsa, Monarch Tractor co-founder and CEO.

‚ÄúOur battery, for example, is as large or larger than any of the big electric cars out there in the same already-proven automotive technology. We didn‚Äôt want to deploy some technology for farmers that would break down or cause issues.‚ÄĚ

The Monarch Tractor battery takes five hours to recharge via a 220-volt system and has battery-swapping capabilities. ‚ÄúYou can swap it out in the middle of the field,‚ÄĚ Penmetsa says. ‚ÄúThat way, you can keep your operation going without having to recharge.

“And our battery, for most operations, lasts eight-plus hours.‚ÄĚ

After hearing from would-be customers, Penmetsa and his team had an ‚Äúaha moment‚ÄĚ that led them to automate both the tractor driver and its implement control. ‚Äú[We heard,] ‚ÄėYour tractor, while great, is not changing my economics significantly,‚ÄĚ he says. ‚Äú

‚ÄėThe diesel cost is not a huge expense for me right now. The cost of the driver is.‚Äô‚ÄĚ

‚ÄúSo, you can use the tractor like a normal tractor, or if you‚Äôre just mowing or spraying or running the same operation three or four times, you can do it once with you on the tractor, and then the tractor can repeat that operation with you off of it,‚ÄĚ Penmetsa says.

And, if something goes wrong or looks amiss? The tractor is ‚Äúsmart‚ÄĚ enough to send alerts as needed.

‚ÄúIt‚Äôs not possible for the farmer to cover every inch of his farm on a weekly basis or a daily basis,‚ÄĚ Penmetsa says. ‚ÄúBut if the tractor is already out there doing all these operations, we can use its cameras and artificial intelligence to provide ‚Äėactionable insights‚Äô to the farmer.‚ÄĚ

On average, you can expect to pay around $50,000 for an electric tractor. You can also expect to save on upkeep, repairs and, of course, the need for fuel.

‚ÄúThere are over 300 moving parts in a diesel engine, so those are all parts that need maintenance,‚ÄĚ Heckeroth says. ‚ÄúWith an electric motor, there‚Äôs only one moving part. With oversize bearings, there is no maintenance required for decades.‚ÄĚ

There‚Äôs at least one more important savings to consider.

This article originally appeared in the July/August 2021 issue of¬†Hobby Farms¬†magazine.