The children went from being scared of the bees to being protective of them. 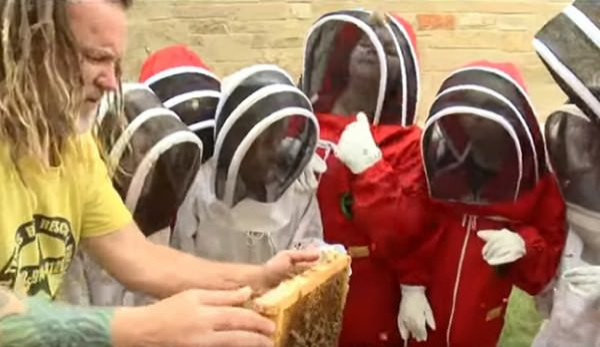 From what I remember, my elementary school didnâ€™t have many clubs students could join, and none of the ones the school did have had anything to do with beekeeping. For students at ShadowGlen Elementary in Manor, Texas (about 12 miles outside of Austin), beekeeping is now an option â€¦ as long as they have their parentsâ€™ permission.

Amanda Lengnick-Hall, a teacher, has overseen beekeeping at other schools in the area and decided to bring it to ShadowGlen,Â myStatesman reports. Her previous students have all been high school age. This is the first year sheâ€™s teaching elementary school age children about beekeeping.

“Beekeeping isnâ€™t very common, especially in schools, so I like that they push themselves, even if theyâ€™re scared,â€ť Lengnick-Hall told myStatesman. “But once they get into the suits and get closer to the bees and they start learning more about them, they start becoming really protective of them. Itâ€™s really exciting to see them go from scared â€¦ to being advocates and getting an opportunity to try something they probably havenâ€™t thought they wanted to try.â€ť

For five weeks the kids studied the bees in an observation hive, according to myStatesman, while learning about pollination, worker and queen bees and colony collapse disorder. The students were then given beekeeping suits to wear for their first interaction with the bees.

“We got to pet the bees, and I got to have honey!â€ť a third-grader named Aubrey Roberts told myStatesman.

The students in the beekeeping club are learning what to do and not do around bees and are also learning entrepreneurial skills by selling the honey the bees make and then using that money for their beekeeping program.

What do you think of a beekeeping club for elementary school students? Would it work in your city?