Get to Know the Emu, Which Once Was Seen as a Rival to Beef

The emu was big on farms until, well, it wasn't. What is it about these huge, flightless birds that prevented them from being the next big meat source? 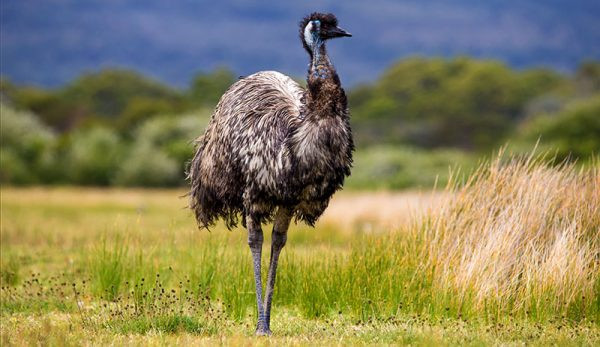 What ever happened to the emu fad? In the 1990s, it seemed like emu would be the leaner, greener, red meat alternative that would give the beef industry some real competition. But the market took a steep dive, and American ranchers abandoned, euthanized and even set free thousands of emus. Some ranchers had lost five-digit investments in breeder birds. If you are considering taking emus on as a niche livestock, make sure you understand their natural behavior and can provide for their distinct needs.

Have You Met an Emu?

Most people havenâ€™t seen one up close, and thatâ€™s for good reason. Even though emus are innocently curious about humans, they are a very recently domesticated animal, and their fight-or-flight instinct is more like fight-or-run (because they are flightless). They have fewÂ  natural predators, many of which have gone extinct, but those self-defense instincts are as sharp as the claws that tip their six-inch toes at the end of extremely powerful legs that jump and kick.

Emus are native to Australia, where it was illegal to commercially breed emus until the 1990s. The big birds have run wild in the outback for about 80 million years, surviving and migrating through diverse ecosystems, including grasslands, woodlands and scrubland. They graze on a wide variety of plant types, eating grasses, fruits, seeds and shoots, plus a wide range of insects. Rather than a sharp beak of a predatory bird or even that of a chicken that pecks around the ground for seed, the emu has a softer beak that is well suited for grazing.

Emus belong to the group of large-bodied, flightless birds called ratites, which also includes ostriches, cassowaries, kiwis and rheas. By the time they’re 6 months old, emus can stand as tall as 6 feet and weigh as much as 150 pounds. They can live as long as 30 years and produce eggs for about half of their lifespan.

In emus, nature has redistributed the power that most birds have on their breastbone for flying. Approximately the same amount of muscle it would take a bird of this size to flap its wings is present in the massive, strong legs instead of the wings. The weight of those big bodies pounding the ground is cushioned by porous, pneumatic femurs, which are the only bones in this birdâ€™s body that are like those of airborne birds. Also, thick cushions pad the bottom of emusâ€™ feet. These feet have been known to smash through metal fences or simply leap over them.

Like other animals that survive in harsh climates such as the camel, emus are drought-tolerant. Their feathers have two textures with at least two functions. Soft and fluffy feathers near the body insulate the bird and protect it from overheating; longer, thread-like feathers cover those and give a grassy appearance that makes good camouflage. Their eyes have nictitating membranes to protect against wind and grit. Emus have adaptations for dry, cold weather too; their complex nasal passages trap and condense moisture from the air and adds that much more water to an internal storage system. Yet another similarity to camels is the emuâ€™s fatty storage pad on its back and remarkable capacity for maintaining a stable body temperature despite extreme changes in weather.

Unlike most bird species, females put on displays to attract males and aggressively fight with competing females. Male emus build the nest and, other than laying the egg, do all the typical mothering. They develop a brood patch, incubate eggs, feed chicks and fiercely defend their young. Female emus often are promiscuous and mate with a few different males, some of which tend the eggs of other fathers. Emus are not very social animals and donâ€™t form flocks or herds unless they are migrating. However, they do form tight family bonds as both parents raise a chick until it is fully grown.

Despite all the hype that surrounded emu marketing two or three decades ago, the big bird has faded into the fringes of small farms once again. Maybe itâ€™s better that way. The market crash might have been a hard lesson, but we might need to learn that some birds should stay wild and run free, no matter how much meat they carry.