The founder tells us what it's like being around water-loving emus while also training her Karakachan dog Louis to become a livestock guardian. 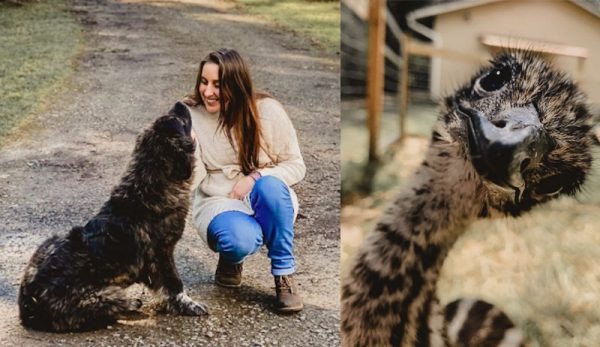 Jade Block’s passion for hobby farming began while growing up, when she became smitten with horses.

“There’s just something magical about that animal when you’re young,” says Block, who adds that her local mayor at the time wound up coming to see her in person after she wrote to him protesting zoning laws that wouldn’t allow suburban homes to accommodate horses.

These days, Block has no problems keeping mini-horses, goats, sheep and even emus on the hobby farm she’s established in Washington, in the Pacific Northwest.

“Of course, I’d never have guessed that when I grew up I’d have horses and emus, and actually prefer the emus!” says Block now. “Plus, I didn’t have to take my local government to task to get them.”

We spoke to Block about running a hobby farm on a day to day basis and what it’s like living around emus. We also got into how her dog, Louis, has become the official livestock guardian.

Introducing Emus to the Farm

Emus are curious, quiet, and really fun to raise on a homestead. They are also gentle with most other livestock. This photo is from July, when they were just little chicks! We are currently waiting for DNA results to find out if we have males and/or females. I hope they make babies! Could you imagine?? ?? . . . #lifeonthefarm #minifarm #hobbyfarm #farmher #familyfarm #smallfarm #backyardchickens #emu #ratite #farmhouse #farmlife #babyanimals #babyemu #chickenmom #backyardpoultry #homestead #homesteading #homesteadinglife #farmstead #farmanimals

Emus are a vital part of the fabric of Block’s hobby farm. The birds were originally added to play a guardianship role and help protect chickens from predators like raccoons, bobcats and coyotes.

“Once the decision to get emus was understood, we couldn’t stop laughing about it,” recalls Block. “Wouldn’t that just be hilarious—emus on the farm!”

Block adds that when she and her husband, Nick, found themselves at a reptile expo a few weeks later, they chanced across an emu breeder selling chicks. “I mean, this is meant to be, right? After talking to him for a solid hour, we decided to just go for it. We brought Beaker and Honeydew home that day.”

Check out these 5 unusual livestock breeds to consider raising on your farm!

“Day to day, emu care is simple,” says Block when asked what the birds are like to be around. “We feed a complete pelleted diet by Mazuri, with dark leafy greens like spinach, chard and kale. As chicks, they slept in the barns at night, although now they prefer to sleep in far corners of the pasture under the stars.”

It turns out that emus also “love routine and stress easily—so socialization is key.” Block describes her emus as “gregarious birds” who are so “curious about everything” that they’ll happily pick at earrings, shoelaces and buttons.

“They interact with everything in their environment—everything!”

“In the mornings, I’ll find them zooming all around!” she explains. “They leap and bounce, fall over and pop up, [there’s] more running, jumping.”

Water-based frolicking is also appealing to the emus.

“They love water and can swim!” says Block. “They love to be sprayed down with the hose and sit in kiddie pools. Everything about them just exudes fun. In the late afternoons, I’ll often find them soaking wet from the water troughs and napping in the sunshine, exhausted. It just makes me smile.

“That’s a good day right there for an emu. Lots of playing and lots of naps in the sun.”

I’m convinced the absolute best farm animal you can possibly have is a good dog! Louis is a Karakachan, our livestock guardian puppy in training, and he is a total dream. His job is to back me up: protect the goats, chickens, and ducks from coyotes, and protect our small acreage from human strangers. We adore having him here, and at just a few months old, he is already comfortable around the farm, chasing off would-be threats… and making sure, when I’m outside, that I am never without a friend ♥️ . . . . . . . . . . . . #lifeonthefarm #minifarm #hobbyfarm #farmher #familyfarm #smallfarm #pnw #farmphotography #farming #homestead #homesteading #homesteadlife #farmstead #countrylife #farmsteading #hobbyfarming #hobbyfarmer #farmlifebestlife #country_features #raw_country #iamcountryside #hobbyfarmsmag #countrylivingmag #countrysideandfarmlife #happyfarmily #homesteaderhaven #farmpupfriday #smallfarmcharm #mycountrycaptures #countrysidethemeoftheweek

Louis is a Karakachan dog who lives on Block’s hobby farm and holds the title of official livestock guardian.

“He was a calm, sensitive puppy, not prone to reactivity and he didn’t move quickly,” recalls Block. “So introducing him to the animals wasn’t eventful. It just became normal very quickly. He is always trying to read me. And he expresses himself non-verbally, so I use a lot of body language when we work together.”

Case in point: Recently, when Block was carrying a group of chicks out of the coop, she became worried that Louis wouldn’t recognize them as being a part of the flock. So she let him smell and investigate.

“He took one sniff, looked up at me, looked down, backed up a few feet and sat, then looked back at me again,” she says. “I take that to mean: I understand what this is, I respect it, and my eyes are back on you for direction.”

She adds that the chicks are now free-ranging and Louis can often be found sneaking in “naps in the shade while they pick through his fur.”

Getting Into Hobby Farming

Happy #NationalPigDay from our two pot-bellied girls! Our piggies were rescued from a crowded muddy pen and now get to enjoy the free-range pasture life.⁠ ⁠ Did you know pigs LOVE to be scratched with a fork? It was my secret weapon to gain their trust – no piggy can resist it!⁠ ⁠ What kind of treats should they get today? Banana? Spinach? Apple slices?

“If this is what you love, jump in with both feet,” says Block as a way to encourage other people to follow their hobby farm dreams and intuitions. “There was no way for me to confidently say I could care for two fully grown emus when we brought the chicks home, but I knew we’d figure it out.”

She adds, “There’s something about this lifestyle that makes life feel full and ever-expanding. It’s truly a wonderland. This desire to connect to nature is so intrinsic in the human spirit. If you are flexible, curious and passionate, you’ll find there’s no other way to live.”