From a rooster gone postal to a traveling fella to a chanticleer's charming trick, these three true rooster tales are sure to brighten your day. 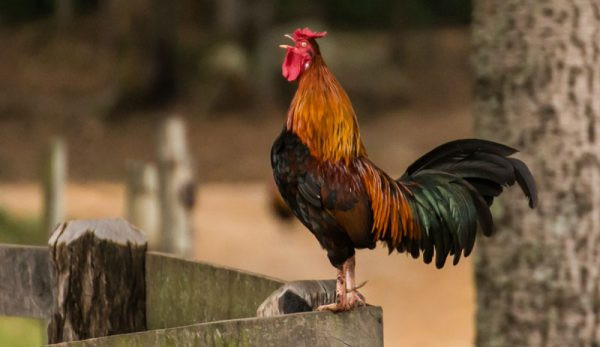 As someone who has had chickens in her life pretty much from infancy on, Iâ€™ve heard of and witnessed firsthand some incredible stories involving intrepid, curious and adorable hens and roosters. Iâ€™ve often considered writing them all down somewhere and publishing them as a book.

Of course, the moment I decide to do that, two roosters start battling it out. Or a hen runs across the lawn cackling or some other distraction occurs, and the creative spark extinguishes until the next time.

I may still write that book someday. For now, here are three of my favorite stories to share with you.

When I was a little girl, my grandmotherâ€™s neighborhood was very close knitâ€”almost a family. The neighbor from across the street would wave and call to us as she hung her laundry out to dry on her rooftop. The older gentlemen who hung out at the corner store always lifted their hats in greeting to me whenever I stopped by for an ice cream with my grandfather.

And the lady next door â€¦ well, she had Pepito.

Pepito was a scrawny mixed-breed rooster with a floppy single comb and jaunty yellow legs. All of the residents in the neighborhood, including my grandparents, kept several chickens. But those birds were confined to the backyard and courtyard areas of each home.

Not Pepito. He was permitted to stroll wherever he wanted.

Pepito seemed to know what his barriers were. He never ventured beyond the intersection with the main road, and he always returned home before sunset. From mid morning to dusk, however, Pepito wandered around. None of us, including my grandmotherâ€™s neighbor, knew when the rooster would pop up.

I kept some pieces of bread (snuck from my grandmotherâ€™s kitchen) in my pocket, ready to offer the little rooster a treat should I encounter him.

The only time that any of us knew where Pepito would be was when the mail carrier arrived. I no longer remember the manâ€™s name. I do remember that he would cheerfully greet every resident by name as he stopped by each gate to deliver letters and parcels he carried in his brown leather bag. And, at his heels, thereâ€™d be Pepito.

The scrappy rooster seemed to watch for the mail carrierâ€™s arrival at the far end of the street. He would then trot alongside the man, pausing at each gate as mail was exchanged, then moving along to the next house. When the mail carrier reached the final house, Pepito would crow a perky goodbye to his postal-worker, waiting until the man had turned the corner before scampering off to who knows where.

Actually, one of the neighbors did indeed know where Pepito disappeared to: the woman who lived across from the corner store. Her house was the last house on the street, the last house both Pepito and the mail carrier visited.

One afternoon, my grandmother came home a little out of sorts after paying a call on this neighbor. It appeared that the womanâ€™s three layers had all just hatched nestfuls of chicks. Apparently Pepito had made a special delivery to this trio of Â hens.

To this day Iâ€™m still not certain why my grandmother was bent out of shape about this. I suppose she expected Pepito to only court one hen, not all three!

A few years ago, several freight trucks arrived in Pittsburgh, hauling loads of gravel from a quarry in Indiana. When the trucks workers unloaded, they discovered a surprise: A little rooster had hitched a ride amongst the rocks.

The rooster seemed nonplussed by his 500-mile trip. He hopped down and began to scratch the ground, looking for food. Whenever one of the workers tried to approach the bird, heâ€™d squawk and dash out of reach, then return to his scratching once the worker backed away.

Nobody knew exactly what to do with the little bird. There was no way to contact his owners back in Indiana. For all they knew, he might not have an owner. He could have been a boy chick released to the wild by a microflock owner prohibited from owning roosters.

The little traveler spent his days exploring around the gravel piles, hunting for insects and soaking up the sun. He’d crow every now and then to remind people that he was still there. He resisted all attempts at capture, and no one quite knew where he sheltered for the night, just that he wasnâ€™t causing any problems.

The owner of the gravel yard finally decided it simply wasnâ€™t a good idea to have a rooster wandering around. Perhaps he was afraid that the poor bird might get mowed down by an oncoming truck. Maybe he was concerned that the rooster would hop onto a truck making a local delivery.

Whatever his reasons, the rooster had to go. The owner called a local poultry farmer, who came and, after a lot of chasing, cornering and grabbing, finally caught the chicken. The rooster became part of the farmerâ€™s flock, his traveling days at an end.

My friend Chris loves his chickens. He keeps a small flock on his acreage in western Pennsylvania and frequently posts photos of them on his Instagram account. Each bird is thoughtfully named, and Chris can cheerily recount tales of each individualâ€™s antics.

We swapped chicken stories recently and Chris shared the story of his rooster, Pepper. A curious little guy, Pepper had a fascination for anything red. He wasnâ€™t like a bull charging a matadorâ€™s cape. Pepper simply loved the color and would gravitate toward anything any shade of crimson.

One day, Pepper was wandering around the yard when he caught sight of a red object he had never seen before. When Chris looked out, to his amusement he saw Pepper perched on top of a bounce ballâ€”the kind sold in supermarkets and department storesâ€”balancing as if he were a circus act.

Pepper laid claim to the red ball. Chris had no problem letting the little rooster have it.

In fact, Chris trained Pepper to do a trick with the ball. Chris would call out, â€śPepper, go get your ball!â€ť then toss the ball into the yard. Pepper would then chase the ball down and perch on top of it.

Both Chris and Pepper had great fun with this trick â€¦ until the day Pepper gripped the ball with his talons too tightly and punctured it. For the next few days, Pepper would amble over to the deflated heap of ex-ball and poke at it, as if telling his toy to get up and play. Poor Pepper!

Several days later, Chrisâ€™ wife came home from errands and asked where Pepper was. When Chris indicated that Pepper was out back in the yard, she headed outside and called out, â€śPepper, go get your ball!â€ť

Then, from a shopping bag, she pulled out a brand-new red kickball, the durable kind used in elementary schools and that could stand up to a roosterâ€™s talons. Pepper was thrilled to have a new red ball friend, and Chrisâ€”and his wifeâ€”could once again enjoy their roosterâ€™s balancing act.