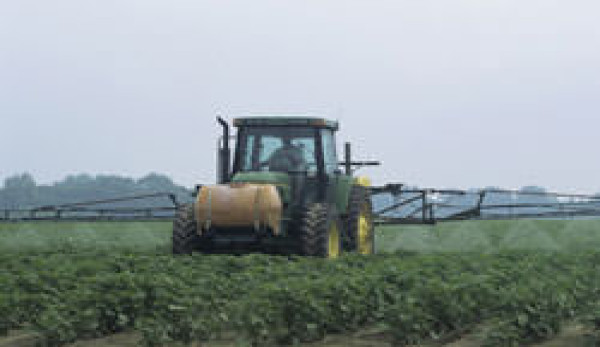 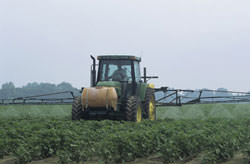 The EPA is taking steps toward banning the popular herbicide atrazine, a known endocrine disruptor.

The chemical â€” most commonly found in American groundwater and is the second most popular herbicide in the U.S. â€” was banned in Europe in 2004 because of its harmful properties. Traces of atrazine still remain in France even though it was last used there 15 years ago.

The Switzerland agrochemical company Syngenta produces atrazine and sells 80 million pounds of it to the United States annually. AmericanÂ farmers rely on the pesticide toÂ combat weed growth in their corn,Â sorghum and sugar cane fields, and it is also applied to lawns and golf courses.

But not all of the atrazine stays in the ground. Once sprayed, more than a half million pounds of atrazine are swept up into the wind and come back in the form of rain and snowfall.

Studies done on male frogs have shown that atrazine in concentrations of 2.5 parts per billion disrupts the endocrine system, leading to immunosuppression and hermaphroditism. Among fish, scientists have found that atrazine affects the reproductive process. In humans, findings point to the connection it may have with cancer. The U.S. Geological Survey, the University of California at Berkeley and the University of South Florida have all published reports on the harmful effects of atrazine.

Supporters of nonprofit organizations Save the Frogs, Natural Resources Defense Council and Center for Biological Diversity signed the petition.

â€śAtrazine is the 21st centuryâ€™s DDT,â€ť says Save the Frogs Founder and Executive Director Kerry Kriger. The organizationâ€™s mission is to defend amphibians, whose extinction rates have been rising at high rates. Save the Frogs contributed 10,000 signatures and is the group behind the request for the EPAâ€™s Notice of Availability. â€śNow that we have the EPAâ€™s attention, we are a large step closer towards protecting our food supply, ourÂ drinking water and our wildlife from this known endocrine disruptor,â€ť Kriger says.

â€śHowever, only a few percent of Americans have ever heard of atrazine, so raising awareness of the issue is critical if we are to overcome the lobbying power of the billion-dollar agro-chemical giants.â€ť

Those who want to comment on this issue must do so by November 14 via the online website, mail or delivered correspondence. Detailed information on the petition can be found on theÂ Federal Register website.

Syngenta, which earned more than $11 billion last year, currently ranks as no. 1 in the list of the worldâ€™s biggest pesticide company.