The Texas-based TikTok sensation tells us how humans could learn a lot from being more like the 5 million bees she keeps at her Austin home. 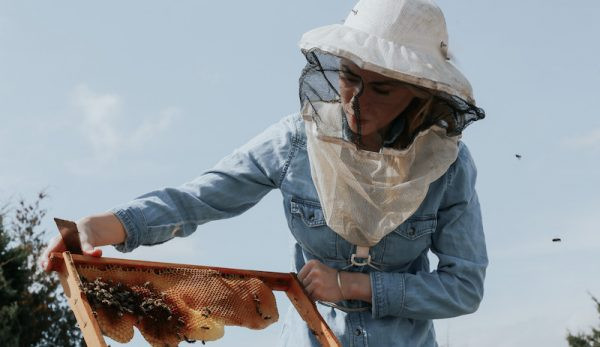 “I absolutely feel an emotional attachment to my bees,” says Erika Thompson, an Austin-based beekeeper who cares for around 5 million of the insects at her Texas Beeworks venture.

Itâ€™s a mid-morning weekday. Thompson is taking stock of the aftereffects of the gargantuan winter storm that ravished parts of Texas during February 2020. Her usually bright voice lowers to a more hushed tenor as she explains, â€śA lot of colonies made it through. But nobody was prepared for that weather, including the bees. Unfortunately some of the colonies that weren’t quite as strong didn’t make it through.”

Even taking into account the oversized scale of bees that Thompson claims responsibility for at Texas Beeworksâ€”an industry standard formula for bee counts estimates 50,000 bees inhabit each hiveâ€”she says that every loss remains “incredibly emotional” to deal with. Thompson often tells herself that when she stops feeling affected by the loss of a colony, that will be the clear signal it’s time to move on from her calling as a beekeeper.

“I like having that emotional attachment to them,” she reasons. “It makes me a better beekeeper.”

Thompson originally started Texas Beeworks in 2014 and switched to running the venture full time in 2019. But it was the viral success of the bee-based instructional videos she began posting to the TikTok social media site the following year that boosted her rise to prominence as a public beekeeping figure.

Each TikTok upload to date has attracted a minimum of a million eyeballs.

In April of 2020, Thompson shared footage of herself shaking out a box of bees to a segment of pop singer Taylor Swift’s ubiquitous “Shake It Off” song. (Result: 1.7 million views.)

Recently, Thompson relayed footage of how to revive a bee that has become adversely affected by the cold winter weather and entered what she calls a “chill coma.” (Two million views and counting.) Most pivotal of all, in August of last year a video of Thompson removing a colony from a backyard compost bin went legitimately viral and was viewed over 40 million times.

In the clip, Thompson handles the bees without any protective gear. She commentates on the process in an explanatory voice that blends enthusiasm with a calming tone.

(As a disclaimer, Thompson mentions in the footage that learning to read the behavior of bees let her know that she was not rescuing an agitated or angry bunch. So she was able to discard the traditional protective beekeeping garb.)

Reflecting on her rise to social media popularity, Thompson says that she’s “absolutely” surprised at the way her profile has skyrocketed. She also finds it a little surreal.

Speaking to such a vast audience through her Texas Beeworks accounts comes with what she views as a “deep sense of responsibility” toward both the bees and her beekeeping peers.

“I feel so lucky to have these opportunities to show people the important work bees and beekeepers do every day,” she says.

Long before Thompson arrived as a public beekeeper figure, she recalls becoming initially smitten with insects while growing up in Katy, a suburb of Houston. After Thompson’s parents denied her request to add a pet Dalmatian to the household, she found fulfillment in the backyard. There, she collected and monitored local bugs.

As a child, Thompson looked at the English primatologist and conservationist Jane Goodall as a hero. (Goodall is best known for her pioneering work studying chimpanzees in Tanzania.) “My mom has photos of me with binoculars around my neck and all my ape and monkey animals lined up,” recalls Thompson. “I was playing Jane Goodall growing up. That’s just who I was.”

A fascination with insects and animals stayed with Thompson through to adulthood. In 2011, she enrolled in a beekeeping class. This wasn’t, she reflects, with the express goal of becoming a beekeeper. Rather, she responded to news reports about how bees were dying and how it was imperative to save the bees.

“I didn’t really know what that meant and wanted to know why,” she says. “I lived in Central Austin at the time and had a very small backyard. So I didn’t think I could keep bees.”

After learning the basics of bee behavior in the classâ€”along with gaining experience going into the hivesâ€”Thompson emerged with baseline knowledge. But she says instead of taking away specific lessons from her inaugural beekeeping class, she was inspired by the more holistic idea that it was paramount to “just follow your heart.” That’s what led her to start Texas Beeworks and find her eventual audience.

When Thompson talks about bees, she does so with a mixture of infectious wondermentâ€”much in the manner of a child heading full on into their first hobby obsessionâ€”and the passion of an advocate.

She speaks with giddy awe about the time a year ago when Texas Beeworks received a call from someone who discovered bees in an old farmhouse that had been left vacant. When she arrived at the scene, Thompson was amazed to encounter five ginormous floor-to-ceiling bee hives embedded in the walls of the property.

“It was five completely separate colonies that had been living there for years, maybe even decades. It’s hard to say,” she recalls. “I hit the bee lottery! It’s one of those things that will never happen again, I’m sure. It was so much fun to spend time in that house and remove all the bees.”

Asked for a favorite fact about bees, Thompson takes a moment to dig into her internal archive. She then begins explaining how the makeup of a honeybee colony is around 90 to 100 per cent female.

“That’s because the female beesâ€”we call them worker beesâ€”do all the work. They’re the bees out foraging, collecting food, taking care of baby bees. They’re building the colonies. But the male bees, they have one job and that’s to mate with the queen. They don’t have stingers. They don’t have wax glands, and they don’t forage for food.”

Connecting Thompsonâ€™s many hive removal missions and intimate bee behavior knowledge and viral TikTok videos is her commitment to the broader philosophy of the insects. She openly talks about the respect and emotional attachment she feels towards her colonies. There’s an empathic reverence to her voice as she marvels at how bees operate as a collective.

They might all have unique temperaments. And rivalries may form between stronger and weaker colonies. But a colony ultimately operates as “a super-organism so no bee thinks of him or herself as an individual. They operate in this mass collective for the good of the colony.”

This communal way of thinking and focus on the welfare of the whole group is a mentality that Thompson readily feels humans could take a few pointers from.

“We can learn so much from bees,” she says. “Bees think of themselves as basically selfless and are just all working together and are so efficient and resourceful.”

After taking a beat, Thompson adds, “If we could all be a little more bee-like, it would be a better world.”