Erma Versus the Bag

My cat learned an important lesson on the kitchen counter. 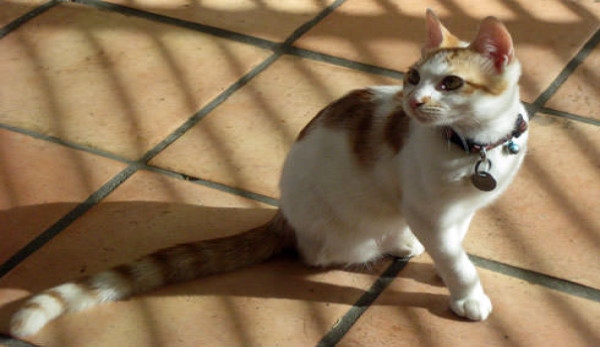 Erma only has three legs, but she can run like the wind when she wants to.

Iām not sure how cats got the reputation for being finicky eaters becauseĀ my cats will eat anythingāand everything. This quest for food knows no bounds with my felines, which means you canāt leave anything on the kitchen counter, dining room table or even the stove without it being dragged away by a voracious cat.

My friend Lisa learned this the hard way when she was housesitting for me one weekend. She made the mistake of leaving a plastic bag with some food in it on the kitchen counter. As she sat on the couch in the living room watching TV, one of the worst food-stealing culprits in the house, Erma, was plotting to get at the contents of the bag.

It was precisely at the moment Lisa turned around to look toward the kitchen that Erma stuck her head in the bag. Lisa instantly knew what was going to happen. Erma had put her head through the handle of the bag, and was now wearing it as a collar.

āWait until she tries to get her head out of that bag,ā Lisa thought.

Sure enough, a second later, it happened. Erma tried to pull her head out, but the bag moved with her. Panic ensued as Erma realized that she was no longer predator but prey. The food she wanted was now chasing after her, in the form of a monstrous plastic bag that followed her every move.

Erma jumped down from the counter and shot across the kitchen floor, the bag following her in a loud, billowy mass. As Lisa leaped from her seat to help Erma, the cat ran past with lightning speed. This was no small feat as Erma only has three legs.

Around and around the house Erma ran, the bag chasing behind her. Lisa soon realized her only hope to catch the cat and free her from the bag was to wait until she ran past. This shouldnāt be too hard because Erma was running loops around the living room.

At the right moment, Lisa reached down and grabbed the bag, cat attached. As she pulled the bag off Ermaās head, the cat flipped over onto her back and hissed madly in Lisaās direction. No doubt she thought the bag had finally caught her and was about to make a meal out of her.

This experience cured Erma of her desire to explore plastic bags on the kitchen counter, but it hasnāt deterred her from trying to get under the lid of the George Foreman grill to lick it clean every time itās being used. I guess it will mean getting her tongue singed off to figure it out. Erma isnāt the sharpest tool in the shed, so that might just be what it takes.