While traditionally used to tend and herd livestock, because of their hardiness, they excel at trail, endurance, harness and as children’s mounts. 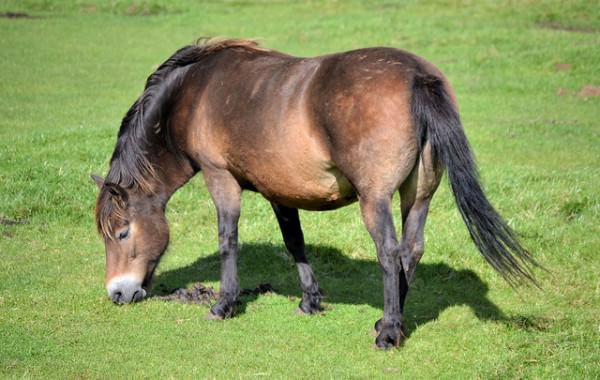 Use: An ambassador of the past, the Exmoor pony has remained relatively unchanged since prehistoric times. Eleven herds still live in a semi-feral state within Exmoor National Park in southwestern England. While traditionally used to tend and herd livestock, because of their hardiness, they excel at trail, endurance, harness and as children’s mounts.

Exmoor ponies first arrived in Britain from Alaska about 130,000 years ago and were hunted by humans for their meat, skin and fat. Due to climate change the pony was restricted to mountain and moorland areas and became known as the British Hill pony. Ponies from these herds were eventually domesticated bythe Celts and used primarily to pull chariots. Later, with the introduction of horses from continental Europe, nearly all of the British Hill pony populations were diluted. Only the geographically isolated ponies on Exmoor escaped with little crossbreeding.

In 1921, the Exmoor Pony Society was established in order to preserve the ponies. The 1940s were disastrous for the pony breed. U.S. troops stationed near the herds used the ponies for target practice and others were stolen and butchered for food. By the end of the World War II, around 50 Exmoor ponies remained. Shortly after, Mary Etherington, a conservationist and supporter of the breed, helped breeders re-establish their Exmoor pony herds.

Conformation: The Exmoor pony has been shaped by nature so there is little variation within the breed. The typical Exmoor pony is squarely built. Stallions and geldings stand between 47 and 51 inches tall, while mares average about an inch shorter. The Exmoor pony’s double-layered coats are bay, brown or dun with black spots and a mealy color on the muzzles, around the eyes and inside flanks. The tail hair is short around the dock and splays outward, which helps channel rain. The pony’s large, protruding eyes are known as “toad eyes” and are protected by a raised rim of fat that helps deflect water.

Special Considerations/Notes: Every year in the Exmoor National Park, the pony herds are rounded up for inspection. Foals that don’t meet the breed standards are sold. The Moorland Mousie Trust, located within the park, is a charity dedicated to placing unwanted ponies and saving them from slaughter. With only 800 individuals in the world, the Exmoor pony is listed as Threatened on the American Livestock Breed Conservancy’s Conservation Priority List.