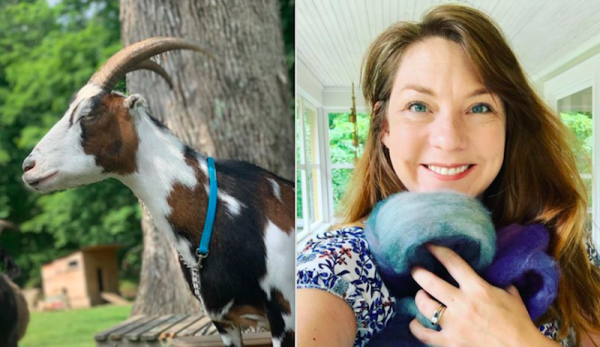 Growing up, Lauren Slingluff remembers her mom having a floor loom in the house. “She made beautiful work on it,” says Slingluff. “I learned how to sew and later how to knit and weave. Most recently I learned how to spin and process raw fiber.”

We spoke to Slingluff about building up her fiber farm and the character of her goats. We also spotlighted a farm star named Callie.

Building Up the Fiber Farm

“Iâ€™d say itâ€™s been a slow build over the last three years as we learn and decide what works best for us,” says Slingluff when she looks back on how Ruby Wolf Farm has developed.

The farm’s initial fiber animals were sourced from Laughing Goat Farms in upstate New York. This allowed Slingluff to start to “learn which breeds we preferred for raising and for finished fiber.” Part of the process has also included “driving back from a fiber festival with goats in the back of my car!”

Slingluff says that one of the joys of fiber farming is that it is not necessarily that intensive on a daily basis. As long as her goats are provided with hay, grain and water, she says they are pretty self-sufficient in the pasture.

“The most helpful thing we have found is to just spend time with your herd when you arenâ€™t trying to catch them for a shot or to trim their hooves,” she explains.

“If every time I go in the field Iâ€™m trying to wrangle them for something they donâ€™t want to do, it becomes harder and harder to get them. So I go outside on lunch breaks and in the morning or evening to just sit with them, give treats and give pets. Now theyâ€™re much easier to grab when I have to take care of something.”

Goats have a reputation for possessing a mischievous streakâ€”and Slingluff says that her tribe can get “incredibly creative.” She says that after building extra tall fences to prevent the goats from jumping over them, they figured out how to get under the barriers.

“We recently got five more cashmere goats from Hidden Brook Farm in Eastford,” she adds, “and itâ€™s been a lot of fun seeing how playful and bouncy they are as babies.”

One of the standout personalities at Ruby Wolf Farm is Callie. Originally a non-fiber back yard pet, Callie has become the farm’s most affectionate and friendly goat.

“Callie also functions as our herd queen, keeping an eye out for predators,” says Slingluff. “She also keeps an eye out for the best treats or plants to eat and the best spot to sleep and ensures sheâ€™s always got the top pick. Sheâ€™s a diva for sure!”

Using Farming to Slow Things Down

“Having the farm has really helped me slow down in a way,” says Slingluff when she reflects on her three years running Ruby Wolf Farm. “Iâ€™m spending more time outside with the animals and am able to appreciate the changing seasons and just take in a beautiful day.”

“Itâ€™s also an incredible feeling to spin and then knit with fiber that you raised and sheared yourself,” she adds. “I always want to take things back out to the field and say, ‘Recognize this? You grew it!’ I love getting to know where my yarn came from and how it was made.”