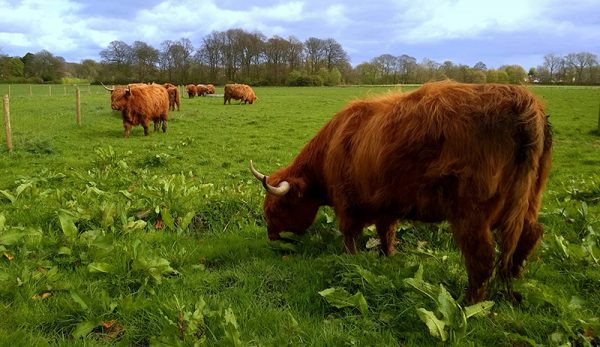 I always wanted a couple of cows.

My uncle raises cattle, and itâ€™s a family joke that, when he canâ€™t be found, heâ€™s probably out talking to the cows. (Itâ€™s a joke only in the loosest senseâ€”the humor lies in the fact that, nine times out of 10, this is exactly where he is.) Iâ€™d had a few conversations with the cows on the farm bordering my grandparentsâ€™ land when I was growing up; I knew they were good listeners, and their slow, dumb stare held a unique charm.

It was more than their conversational brilliance that made me long for a bovine presence in my lifeâ€”I wanted buckets of fresh milk and grass-finished steak on the dining table whenever possible, and the distinct challenge of effectively pasturing large-scale ruminants was one I felt keen on mastering. So when my family of five moved to a central Kentucky farm with two empty horse pastures, the next step felt obvious: We drove a few hours south to pick up two black Dexters (the smallest non-miniature cattle breed), a pregnant cow and a steer for the freezer. Then we called the extension agency to meet with a guy about how to raise them.

When our county agent, a kind and deeply well-informed man on whom we soon grew to rely, stepped out of the truck, he scanned the two pastures and said, â€śVery nice. You can have your cool pasture on this side and warm pasture over here.â€ť

My wife and I were befuddledâ€”of course we understood there were different kinds of grass, but different kinds of pasture? This lesson was the first of many we had yet to learn about grass-finishing cattle. In the end, we ended up selling our couple of cows, having learned the final lesson that we were better at pasturing pigs than cows, but not before getting a deep education in planning grass pastures for effective cattle farming.

The idea of having different pastures for different weather conditions is meant to keep cows eating grass as long as possible and minimize the need for hay, which, if youâ€™re buying, can pose a considerable cost increase (maintaining heavy-use haying equipment can be pretty dear, too).

Focus on seeding warm-weather grasses (C3 species) in one pasture during the waning days of winter to establish a grass crop for cows to enjoy during the summer months. A common approach is to toss it atop the snow, which melts and deposits seeds in the ground. Then start cows in your pasture with cool-weather grasses (C4 species) when spring has sprung and growth resumes. Rotate cattle into the warm-weather pasture when temperatures reach 70 to 95 degreesÂ Fâ€”the grass should be ready then because you seeded earlier in the year.

Warm-weather grasses lose nutrients and eventually go dormant when temperatures drop between 40 and 75 degreesÂ F, which is when you rotate the cows back into the pasture where you grow cool-weather grasses. And as summer offers you a great opportunity to treat and inspect the cool-weather pasture for bare or damaged spots that need attention, your pasture should be ready to go when the warm-weather growth starts to fall off.

Planning seasonal pastures is just one component of pasturing cattle, but it can keep cows growing effectively until the deep freeze pushes them on to hay. And keeping cows on pasture for as long as possible keeps farm costs low without sacrificing the animalsâ€™ comfort. Hereâ€™s a quick primer on what grasses go where in your cool- and warm-weather pasture arrangement.